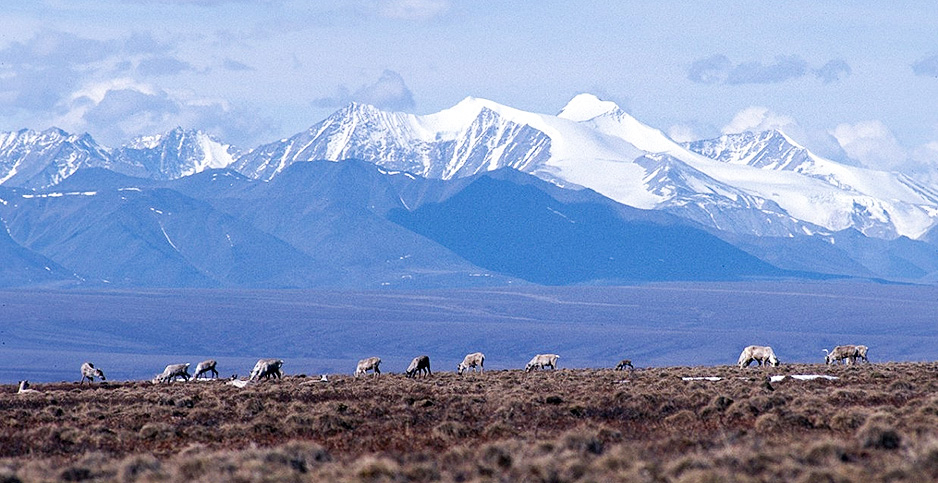 Caribou grazing on the coastal plain of the Arctic National Wildlife Refuge, with the Brooks Range as a backdrop. Fish and Wildlife Service/Flickr

Kaktovik Iñupiat Corp. says the Interior Department’s "failure to do its job" is the root cause of its canceled application to harass polar bears while mapping oil and gas reserves in the Arctic National Wildlife Refuge.

The harassment authorization was needed before Interior could greenlight the Alaska Native corporation’s bid to conduct 3D seismic testing, making it unlikely that the attempt to update decades-old estimates of ANWR’s oil and gas resources will be approved by the Biden administration.

Interior reported last week that the agency had voided the KIC harassment authorization and noted that the company had not conducted three required flyovers to identify the location of polar bear dens that could be harmed by seismic activities (Energywire, Feb. 22).

But KIC says it was Interior that ran out the clock, and it is demanding an apology from the agency for apportioning blame to the corporation.

The Fish and Wildlife Service’s evaluation of the harassment request depended on the flyovers — all to be conducted before mid-February — as part of its preliminary determination that the heavy trucks and operations needed to gather seismic data would harass but not kill bears. But the wildlife agency didn’t give KIC the needed permission to conduct the flights, the company and the agency agreed.

"We couldn’t conduct the aerial surveys without the incidental harassment authorization from the USFWS, but we also couldn’t get permitted for seismic by that agency without conducting them," Matthew Rexford, president of the corporation, said in a statement.

He added: "They held all the cards."

Last week, Interior Communications Director Melissa Schwartz said in a statement that KIC had confirmed to FWS that it had not completed the aerial surveys required as part of its harassment authorization ahead of a Feb. 13 deadline for the flights. At that time, the wildlife agency was also facing a statutory deadline to issue or deny the harassment authorization.

"The company was advised today that their request is no longer actionable, and the Service does not intend to issue or deny the authorization," she said on Feb. 20.

In its press release yesterday, Kaktovik Iñupiat Corp. said that "the agency’s own negligence, irresponsibility and failure to do its job" led to that result. KIC sought permission to conduct the flights multiple times, the corporation said.

FWS published the KIC draft harassment authorization during the Trump administration in December. It was then criticized by environmentalists and other opponents of drilling in ANWR as a rush to act before the Biden administration took office.

The draft finding, issued shortly after the Trump administration announced the first sale of drilling rights in the refuge, inspired a flood of more than 6 million comments, according to Interior, hampering the wildlife agency’s ability to finalize the harassment authorization by the flyover deadline of Feb. 13.

The flyovers were a late add to the permit request, proposed by the company.

Seismic testing was already facing a regulatory limbo before the harassment dispute. President Biden froze all ANWR oil and gas activities, including seismic work, shortly after taking office. Environmental and Alaska Native groups have sued over the program and the first sale.

The ANWR oil and gas program, however, continues to be the law of the land, proponents of the program insist.

The Republican-led Congress of 2017 called for two oil and gas sales in the refuge as part of its massive tax package. A $1 billion revenue estimate from the refuge oil program was included as a partial offset to the tax overhaul’s $1.4 trillion cost, according to watchdog group Taxpayers for Common Sense.

But the first sale, coming at a time of political uncertainty and depressed global oil and gas prices, was widely seen as a disappointment. Of just three bidders, the largest was the state of Alaska, which has long hoped the refuge would revive its declining North Slope oil business (E&E News PM, Jan. 6).

The U.S. Geological Survey estimates that a mean 10 billion barrels of crude could lie beneath the refuge’s coastal plain, based on seismic data collected by industry in the 1980s.