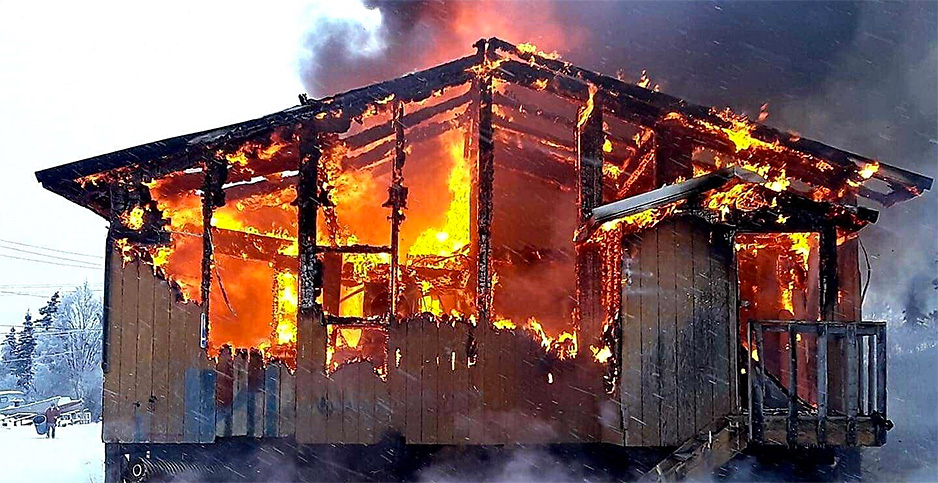 The "washeteria" in Tuluksak, Alaska, burned down Jan. 16. Matthew Alexie

Nearly a month after a fire destroyed the only source of potable water for the entire Alaska Native village of Tuluksak, residents there continue to rely entirely on bottled water and plead for help.

Environmental activists and villagers there say the situation shines a light on the precarious position of Indigenous populations facing crumbling infrastructure and tepid state support, one disaster away from quality access to water.

On Jan. 16, a fire destroyed the community’s "washeteria" — the village’s central water source and the sole purification point, laundromat and place to take a shower. The fire left Tuluksak’s 450 residents dependent on bottled water that’s flown in or transported using a frozen river as a road. They can venture to nearby rivers to haul, melt and boil ice, but there are major concerns about water quality from a river EPA officially considers contaminated.

The village is not connected to Alaska’s road network, and the nearest community with access to more services is Bethel, 35 miles to the northeast.

"I’m really worried about our elders and our babies having good, clean drinking water," said Melony Allain, the Tuluksak Native Community’s tribal administrator, who lives in the village. She has six children and is pregnant with her seventh.

Laura Kashatok, 54, who lives in Tuluksak with her husband, five children and several grandchildren, said the fire sparked when something overheated in the boiling room. Residents tried to put the fire out with buckets filled with river water but couldn’t save it, she said.

"Every time we’d wash our clothes, it would heat up the whole building," she said. "We worried sooner or later it would burn down."

Alaska Gov. Mike Dunleavy (R) authorized a disaster declaration Feb. 8, freeing up the state’s assistance program and allowing communities and agencies to be reimbursed for eligible costs associated with disaster relief up to $1 million.

And other help is on the way: The tribal health care system, Yukon-Kuskokwim Health Corp. (YKHC), delivered materials last week to pipe in river water and has been sending water and hand sanitizer too. A storm delayed some supplies, but once operational, the pipes will allow the school to reopen with fire sprinkler capacity and the ability to flush toilets, as well as provide water for laundry.

Dunleavy’s office maintains that the state has worked with local partners, including the YKHC and many others, to ensure villagers in Tuluksak have constant access to drinking water and that the ice road is maintained. His office also released a detailed accounting of the state’s response.

Yet the timing of his response and the village’s dependence on water mostly from the private sector are drawing criticism.

Allain said the only contact she’s had with the state involves questions about donated water — which sometimes lasts crowded households only two or three days.

"What’s the point of declaring the emergency if it’s not going to get us water immediately?" she asked. "I can’t imagine if these donations stop trickling in, where we are going to get the water from?"

Five bipartisan Alaska state lawmakers last week blasted "inaction" on the state level. In a letter to Dunleavy, the House and Senate members contrasted the governor’s slow action to voluntary support from the local Native health corporation and individual donors, including Ryan Air, Alaska Airlines and Indigenous rapper Taboo Nawasha of the Black Eyed Peas, who sent pallets of water to the village.

"Leaving the community without sustained water security amid the worst public health pandemic in over a century is simply not an option," they wrote. "Immediate state action is clearly needed."

"It’s hard for Indigenous people to get noticed," Kashatok said. "We are happy people are thinking of us. That brings tears to our eyes."

"The state is leaving us hanging here," Allain said.

A spokesman for the governor told E&E News last week there were no plans to deploy the National Guard.

"There are no life or safety issues, so there is no reason for the AKNG to be deployed," Jeff Turner, deputy director of communications for the governor’s office, wrote in an email. "Tuluksak has adequate supplies of bottled water for drinking until an intermediate solution is implemented. The residents can use river water so long as it is boiled."

Villagers say that’s misleading. While some water is available to purchase in the town store, a small bottle is $2 to $3 and a gallon clocks in around $13 or $14.

And they are wary of water from the nearby Tuluksak and Kuskokwim rivers that appears brown even after boiling. They fear the water is contaminated from upstream gold mining in the Nyac Mining District and other heavy metals naturally present in the region. Many have gotten sick from it in the past; some are still consuming it because that’s all they have.

As of 2018, the Kuskokwim River is on the EPA-approved list of impaired waters under the Clean Water Act’s Section 303(d) and needs a plan to remedy "toxic and other deleterious organic and inorganic substances" including antimony, arsenic and mercury from mining.

But Turner said the state has been helping in a variety of ways and does not need to declare an emergency to provide assistance.

The Alaska Division of Homeland Security and Emergency Management, for example, is focused on coordinating logistics with on-the-ground groups like the YKHC and ensuring assistance is provided even if that support comes from nonprofits or private companies as opposed to the state, said Jeremy Zidek, a spokesman for the division.

"We always want to work with the people who have expertise in those regions," said Zidek. "They can provide help as fast as possible."

Meanwhile, exorbitant private shipping costs into the rural Alaska bush are eating up monetary donations that were intended for bottled water, even as some airlines are flying it for free or cheap. Family members in Anchorage are coordinating with donors to get pallets from as far away as New York.

Environmental justice advocates think that the government — not private individuals — should do more and that the situation highlights challenges Indigenous communities face with water insecurity.

Santiago Ali said studies show that areas in Alaska lacking strong water infrastructure also suffer more from sickness and disease, made worse in an ongoing pandemic. Such "sacrifice zones" need to be identified and investments made, possibly as part of President Biden’s $2 trillion infrastructure package or by doing a better job of focusing the use of state revolving loan funds.

According to the Indian Health Service, 6,600 American Indian and Alaska Native homes lack access to a safe water supply or waste disposal facilities. EPA has identified $2.4 billion in future tribal drinking water infrastructure needs over the next 20 years.

"We are a tough, resilient, strong Yup’ik community," Kashatok said. "We see what our ancestors did in the past, so that’s what gets us motivated. Instead of abandoning our village, we’re here. We’re going to be here."