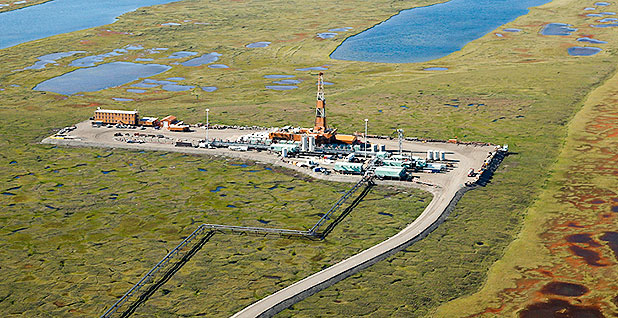 ConocoPhillips' CD5 drilling site was the first to begin pumping oil from the National Petroleum Reserve-Alaska. Photo courtesy of ConocoPhillips.

In December, as temperatures plummeted across the Arctic tundra, ConocoPhillips contractors headed to Alaska’s sunless North Slope to build ice roads for this year’s work season in the National Petroleum Reserve-Alaska.

Over the course of the frigid winter, the company is installing an 8-mile gravel road with two bridges and an 11.8-acre well pad at its Greater Mooses Tooth 1 (GMT1) drill site in the northeast corner of the Alaska reserve.

West of that site, ConocoPhillips is conducting 3-D seismic tests at the Greater Mooses Tooth 2 (GMT2) site and at the company’s newest discovery, known as Willow.

The wintertime operations are part of the company’s methodical and relentless westward push into the 22.8-million-acre NPR-A, the largest block of federally managed land in the United States.

Over the past 17 years, ConocoPhillips has drilled almost 30 wells in the Alaska petroleum reserve. But it wasn’t until 2015 that the Houston-based oil company pumped the first-ever commercial oil from those lands.

ConocoPhillips and its minority partner Anadarko E&P Onshore now dominate the oil-rich northeastern corner of the NPR-A, owning over a million acres of leases — more than any other company.

"If the sizes of these new discoveries hold up or are proven by development," Houseknecht said, "it’s likely to kick off a much, much broader set of exploration activities [on the North Slope] than we’re talking about today."

On state lands just to the east of Alpine, Armstrong is developing a massive new hydrocarbon deposit at its Nanushuk oil field within its Pikka unit. The Denver-based company reports that its discovery holds probable oil reserves of 1.4 billion barrels and could produce up to 120,000 barrels per day.

The Army Corps of Engineers is working on a draft environmental impact assessment on Nanushuk, which is expected to be released in early August.

Meanwhile, Caelus Energy executives are predicting that their Smith Bay leases, located north of the NPR-A in state waters, could contain 2.4 billion barrels of recoverable oil. The Dallas-based company estimated that the discovery has the potential to produce 200,000 barrels per day. However, the company’s estimates have not been independently verified.

The Caelus oil play would be the most difficult to commercialize because it’s located more than 100 miles from the Trans-Alaska Pipeline System (TAPS). Although the wells are located on state lands, developing the oil would require construction of commercial facilities and a pipeline across protected NPR-A lands.

These three sites are the largest oil discoveries on the North Slope since Arco Alaska tapped the Alpine field in the Colville River Delta in 1994. That field, which was projected to hold 430 million barrels of oil, is now part of ConocoPhillips’ North Slope operations.

If the three companies succeed in tapping their prodigious new discoveries, they would go a long way to re-energizing TAPS, which carries crude from the North Slope oil fields to the Valdez export terminal.

The pipeline’s daily throughput peaked at 2 million barrels in 1988 and has since steadily declined to 500,000 barrels of oil, threatening the long-term viability of the 800-mile pipeline system.

The NPR-A, which is roughly the size of the state of Indiana, was originally set aside by the U.S. government in 1923 as an emergency oil supply for the Navy. In 1976, those lands were transferred to the Bureau of Land Management.

The petroleum reserve is one of three potentially oil-rich territories in the American Arctic that President Trump has promised to open to new oil and gas development. Also targeted for future leasing are the Arctic National Wildlife Refuge (ANWR) and the offshore federal waters of the Beaufort and Chukchi seas.

But opening ANWR and the Arctic waters to resource development will be far more difficult than permitting oil drilling in the NPR-A. Those blocks of land are protected by federal wildlife preservation laws. Efforts to overturn the mandates could face bipartisan resistance in Congress, as well as heated legal battles from conservationists determined to protect the regions’ diverse wildlife, ecologically sensitive lands and Native subsistence lifestyle.

By contrast, ConocoPhillips is already pumping oil from the NPR-A at its CD5 operation. That site, a western satellite of the Alpine unit, is providing the first steppingstone for a string of new wells in the petroleum reserve.

The company’s GMT1 well site, its second operation in the NPR-A, is expected to begin production in late 2018. Meanwhile, ConocoPhillips executives contend that federal regulators are dragging their feet in approving a third well site, GMT2. BLM regulators recently predicted that a draft environmental impact assessment for GMT2 will be completed by the end of the year.

Just how much oil is available in the NPR-A has been the subject of a series of conflicting federal studies. In 2002, USGS predicted that the reserve could hold a bountiful 10.6 billion barrels of undiscovered oil.

All that is about to change as a result of the ConocoPhillips, Armstrong and Caelus discoveries. Those plays are providing enticing evidence that the 2010 USGS assessment vastly underestimated the reserve’s oil potential.

"What really surprises in this case is the size of the discoveries that are being announced," USGS’s Houseknecht said. "If the pools turn out to be as big as these estimates, this has blown the door off the upper end of the case that we used when we did the [2010] assessment."

He said USGS is considering updating its 7-year-old assessment of the petroleum reserve’s undiscovered oil and gas potential. First, however, scientists need detailed information from the oil companies on the promising new wells.

"Very little critical well data has been released" by the companies, Houseknecht noted. "We may need to wait until certain proprietary well data are released."

A new federal assessment of the NPR-A would also consider technology advances in the oil industry since the 2010 report was written.

Geologist Mark Myers, former commissioner of Alaska’s Department of Natural Resources, observed that drillers on Alaska’s North Slope will greatly benefit from the innovations in horizontal drilling and hydraulic fracturing that have revolutionized shale oil development in the Lower 48.

"The USGS dismissed areas of the NPR-A that were low-quality reservoirs," said Myers, who headed USGS during the George W. Bush administration.

"They were basing them on the state-of-the-art knowledge in 2010," he said. Today, however, "there’s much more technically recoverable oil in these lower-quality reservoirs than we previously thought" thanks to new drilling techniques.

ConocoPhillips owns the vast majority of federal leases in northeast corner of the petroleum reserve. That region has long been recognized as containing the most readily available oil resources in the NPR-A.

But the company is blocked from expanding directly west into the petroleum reserve. The Obama administration’s 2013 NPR-A management plan banned oil and gas drilling on 3.65 million acres of land around Teshekpuk Lake. That 22-mile-wide body of water, located 80 miles southeast of Barrow, provides critical habitat for migratory birds, caribou and other wildlife populations.

The Armstrong and ConocoPhillips fields are located just east of the Teshekpuk Lake protection area. Caelus’ Smith Bay site is in state waters at the northern edge of the federal reserve, right next to the protected lands. According to Caelus executives, the geology underlying the Smith Bay discovery suggests the region could contain a massive 10 billion barrels of oil.

As scientists take a harder look at the North Slope geological formations, Alaska Sen. Lisa Murkowski (R) is urging the Trump team to expand the amount of NPR-A lands available for petroleum development.

"Under the Obama administration, effectively half of the NPR-A was pretty much taken off-limits," noted Murkowski, chairwoman of the Senate Energy and Natural Resources Committee. "I’d like to see a national petroleum reserve with greater opportunity for exploration activity."

ConocoPhillips agreed, issuing a statement saying that it would also "like to see the BLM consider making lands west of our leases in NPRA available for leasing."

To open the NPR-A’s protected regions to oil drilling, the Trump administration would have to rewrite Obama’s management plan for the refuge and develop a new environmental impact assessment for those lands. That process could take at least two years to complete and would likely attract legal challenges from conservation groups.

During his first weeks in office, Trump has already begun easing environmental restrictions on oil development in the NPR-A.

The Trump team withdrew an Obama administration legal opinion that backed the Interior Department’s regional mitigation strategy limiting oil exploration in the petroleum reserve. That proposed strategy, released in September, would require oil companies and other resource developers to pay for the unavoidable impacts to subsistence uses they’re likely to cause when operating in the NPR-A (E&E Daily, Jan. 4).

Now BLM officials are suggesting the mitigation strategy may be totally overhauled to reflect the new team’s policies.

For the short term, the recent Alaska oil discoveries could attract more industry interest in North Slope lands managed by BLM and the state. Most of the state properties just east of the ConocoPhillips and Armstrong well sites are already leased. But some slivers of open lands are still available for exploration.

In December, BLM and Alaska auctioned thousands of acres of unleased North Slope lands for oil and gas development. BLM received 92 bids, the most since the agency started offering annual lease sales in the NPR-A in 2011. In total, the agency sold 613,000 acres and raised $18.8 million dollars.

A highlight of the auction was a bidding war between ConocoPhillips and Armstrong, which both sought some of the last available northeastern NPR-A lands. ConocoPhillips was the successful bidder, acquiring 594,972 acres of reserve leases, some of them with its partner Anadarko.

At the same time, a variety of bidders snapped up 599,880 acres of Alaska state lands on the North Slope and 33,460 acres in state coastal waters of the Beaufort Sea. The auction brought in $17.8 million in winning bids.

If the Teshekpuk protected lands were open for leasing, however, oil companies would be likely to offer top dollar for the potentially petroleum-rich property.

"That’s the one that’s going to have the biggest first impact," Myers said. "They’re looking at more than 100,000 barrels per day. That would increase TAPS production by 20 percent. We’re looking at a 2021 time frame for production, so that’s not many years off."