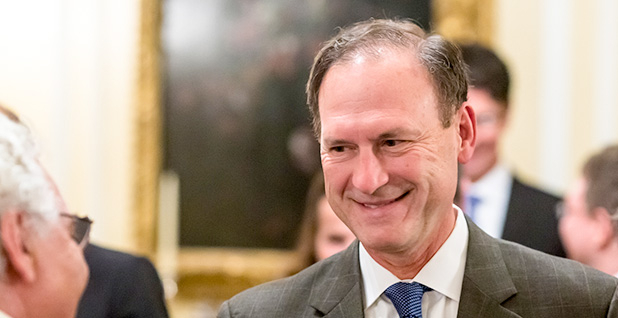 Supreme Court Justice Samuel Alito today recalled how his late colleague, Justice Antonin Scalia, made oral arguments a "contact sport." Photo by the Embassy of Italy in the U.S, courtesy of Flickr.

Supreme Court Justice Samuel Alito criticized today an Obama administration climate rule and his colleagues who thought it was legal.

Speaking at a Washington event hosted by the conservative Federalist Society, Alito fondly recalled his late colleague Antonin Scalia and praised a Scalia opinion that knocked down a U.S. EPA rule that sought to modify the Clean Air Act’s thresholds for greenhouse gases.

In Utility Air Regulatory Group v. EPA, decided in 2014, "Congress wrote certain numbers into an environmental statute, numbers pertaining to pollutants," Alito said. "At the time, Congress had in mind conventional pollutants; it was only later that the Supreme Court held that pollutants under the Clean Air Act refers not just to the kind of thing Congress probably had in mind when it enacted the statute, but also to greenhouse gases."

He continued, "Now if you apply those numbers to conventional pollutants, they make perfect sense. If you apply them to greenhouse gases, you get crazy results, as the EPA recognized."

At issue is the Obama administration’s 2010 "tailoring rule," which aimed to focus permitting rules on only major sources of greenhouse gas requirements, rather than using the lower pollution thresholds laid out in the Clean Air Act.

"So what did EPA do?" Alito said. "Well, EPA had an eraser and it had a pen, so it took the statute and it erased the numbers that Congress wrote and it wrote in numbers that were more to its liking."

"Nino’s opinion for the court held that this was illegal, but four of our colleagues thought that what the EPA did was just fine under Chevron," Alito said, referring to the legal doctrine established in Chevron USA Inc. v. Natural Resources Defense Council holding that agencies should be granted deference when Congress hasn’t clearly spoken to a particular issue.

Scalia became a scourge of Chevron in recent years. That doctrine often plays a major role in environmental lawsuits, where agencies argue they should have the ability to use their technical expertise when issuing regulations.

Alito said Scalia’s absence is notable on the court. "There has been a palpable emptiness in the room," he said.

For example, Alito and his colleagues "have noticed that lawyers arguing cases are beginning hesitantly at first but with more and more confidence to talk about ‘legislative history.’"

When Scalia was on the bench, he said, "experienced advocates knew what the reaction would be if there was any mention of legislative history. And this term, when lawyers have started to mention legislative history, I have reflexively looked to where Nino sat."

"And in my mind, I can hear his voice: ‘A colloquy on the floor of the Senate. Was anybody there at the time? Did the House vote on that report? Did the president sign it?’"

But, Alito said, "there is no voice. Nino is not there."

He argued his last case before the Supreme Court in 1985, just before Scalia was appointed by President Reagan.

"When Nino joined the court, oral argument was transformed. It became a contact sport. The courtroom was not a safe place when Nino was on the bench," he said.

Alito noted that a journalist had counted the total number of questions each justice asked during a two-week argument session in Scalia’s first term on the bench.

"Nino, the most junior justice, had asked 126 questions, more than 40 percent of the total," he said.

Alito also recounted a speaking event he did at Columbia University years ago, when the Federalist Society chapter there "gave me a T-shirt that bore the letters WWSD, signifying ‘What Would Scalia Do?’ At the time, it struck me as slightly sacrilegious."

But after Scalia’s death, he said, "here below, we are left to ask ourselves, WWSD?"