All BLM directors have ‘baggage.’ Is Biden’s pick’s too much? 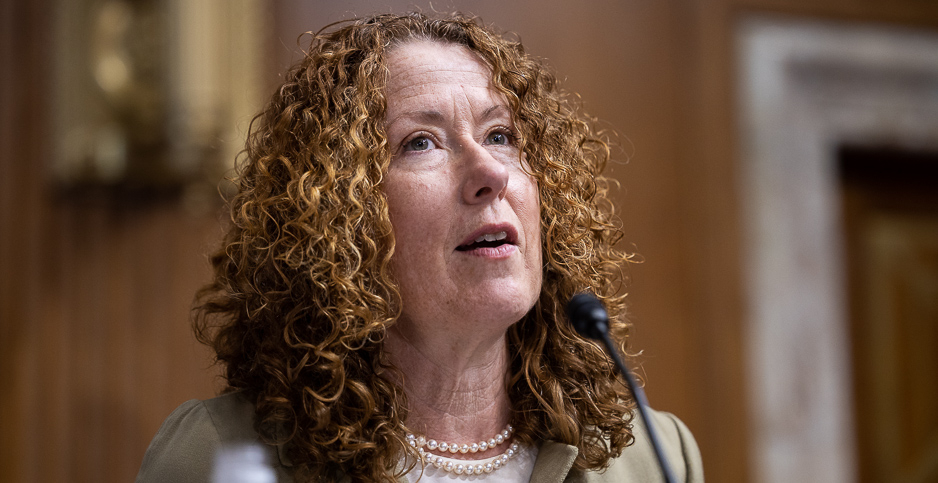 Tracy Stone-Manning, the Biden administration's nominee for director of the Bureau of Land Management, during her confirmation hearing. Francis Chung/E&E News

When she was first announced as President Biden’s pick to lead the Bureau of Land Management, backers touted Tracy Stone-Manning as a bridge builder uniquely positioned to right an agency that went without confirmed leadership throughout the Trump administration.

But after a bruising nomination battle driven in large part by Republican attacks on Stone-Manning’s involvement in a tree-spiking incident more than three decades ago, observers suggest that if she does take the helm of the bureau, her first test could be winning over the employees she seeks to lead.

That’s because if confirmed — which could be set in motion as soon as this week with a vote in the Senate Energy and Natural Resources Committee — Stone-Manning, currently the associate vice president for public lands at the National Wildlife Federation, will lead an agency whose 10,000 employees are largely dispersed across the rural, and often conservative, West.

One former BLM director said career employees — and the local communities in which they operate — are not likely to openly embrace a leader tainted by new questions about her one-time association with a confrontational environmental group and some members’ work to sabotage timber sales in Idaho in the late 1980s.

“I personally was quite supportive of the nomination, but this is just going to be an impossible situation. If she’s confirmed, it’s just going to be impossible,” former BLM Director Jim Caswell told E&E News. Caswell served under then-Interior Secretary Dirk Kempthorne during the Republican George W. Bush administration.

He continued: “It’s a detriment to the employees. The folks that she’d need to deal with out here in the West, out here in the communities, the door will close. It’s just going to get really bad.”

But others were less sure that Stone-Manning will come in with such a black mark, with one current BLM staffer saying he saw the opposition as pure politics.

The most recent confirmed BLM director, Neil Kornze, who led the agency at the end of the Democratic Obama administration, this month released an op-ed praising the longtime Montana resident for her “Western sensibility” and thoughtfulness, which he argued is needed to help rebuild the bureau.

Stone-Manning boasts a long career in the Treasure State, starting first with conservation before moving on to stints as director of the Montana Department of Environmental Quality and chief of staff for former Democratic Gov. Steve Bullock.

But Republicans have relentlessly questioned her initial time in Montana, focusing on her work with Earth First as a graduate student at the University of Montana.

Wyoming Sen. John Barrasso, the energy panel’s top Republican, has accused Stone-Manning of misrepresenting her role in efforts by Earth First activists to derail a planned timber sale in the Clearwater National Forest in Idaho in 1989.

Stone-Manning has long portrayed her role as no more than retyping and mailing a warning letter to the Forest Service, echoing testimony she gave on behalf of federal prosecutors in a 1993 criminal trial against two fellow activists.

Barrasso released a letter from retired Forest Service Special Agent Michael Merkley last week, alleging that Stone-Manning “was an active member of the original group that planned the spiking.”

But John Blount, one of two men convicted of spiking the trees, told E&E News that while Stone-Manning was aware of the plan, she was not integral to its execution.

Despite Republican opposition — members of the Senate Energy Committee have signaled they will vote as a bloc against Stone-Manning — Democrats have remained supportive. And the White House says it, too, remains firmly behind Stone-Manning’s nomination.

“Tracy Stone-Manning is a dedicated public servant who has years of experience and a proven track record of finding solutions and common ground when it comes to our public lands and waters. She is exceptionally qualified to the be the next Director of the Bureau of Land Management,” White House spokesman Vedant Patel said.

His staunch views, and history of lawsuits against the agency, made him a divisive figure in federal land management.

Caswell suggested the attention to Stone-Manning’s dalliance with Earth First could have a similar effect if she is confirmed.

“It’s the reverse really of the whole Pendley thing: It’s like a huge pendulum going from one side to the other. It’s a bad deal,” said Caswell, who is also the outgoing chairman of the National Association of Forest Service Retirees. NAFSR does not take positions on nominees, and Caswell emphasized he wasn’t speaking on behalf of the group.

“I want what is best for the agency, its employees and for the public they serve,” Abbey said. “I am afraid having Stone-Manning confirmed as its director will bring needless controversy to the BLM, which is not what the Department of Interior nor the Biden administration needs right now” (Greenwire, June 21).

Federal land managers — at BLM, as well as the Forest Service and the Fish and Wildlife Service — are not unfamiliar with contentious adversaries from both ends of the political spectrum.

BLM agents gained national attention in 2014 for the armed showdown with Nevada rancher Cliven Bundy and his supporters, including members of the Three Percenters militia movement.

The agency had attempted to seize Bundy’s cattle for auction to settle more than $1 million in unpaid trespass and grazing fees, but abandoned the effort in the face of the opposition, releasing the 400 or so cattle it had impounded (E&E News PM, Aug. 6, 2020).

On the other end of the spectrum, BLM units have faced attacks from groups like the Earth Liberation Front and the Animal Liberation Front. The two organizations released 400 wild horses from a Burns, Ore., facility in 1997 before setting fire to the site, and similarly attacked a wild horse facility in California in 2001 (Greenwire, Nov. 30, 2012).

Still, BLM employees could be split down the middle on whether Stone-Manning’s record is too tainted by the tree-spiking case or clear, several former bureau staffers told E&E News.

Don Simpson, former BLM state director for Wyoming, said he thought some of the bureau’s workers may agree with Abbey.

Simpson likewise echoed the concern that Abbey expressed over the tactic of tree spiking, which involves driving nails or rods into trees to deter logging and risks both workers and firefighters for many years after the fact. People in the field could have a strong emotional reaction to Stone-Manning’s background for that reason, he said.

For her part, Stone-Manning said in recent written answers to the Senate committee that she doesn’t “condone tree spiking or terrorism of any kind.” Associates from her time in graduate school also told the Post that she was a voice in student activism against those kind of strategies.

Not everyone feels Stone-Manning has been given a fair shake.

A 40-year veteran of the BLM said he was “disappointed” in Abbey, a Democrat, for going public with his opposition to Stone-Manning’s confirmation. He said the controversy reeked of politics and that Stone-Manning had proved transparent over and over about an incident that occurred when she was in college more than 30 years ago.

He was unable to speak on the record because he is still employed by a federal agency, but he said he believed Stone-Manning was a good candidate to navigate the complexity of BLM, its size and the diversity of missions.

“Everything that you hear about her working career has emphasized bringing people together,” he said. “She’s got a lot of skills that BLM could use right now.”

Kornze, who served as the BLM director after Abbey during the Obama administration, and Jim Baca, who served nine months in the Clinton administration, similarly urged Democrats to press ahead Stone-Manning’s nomination in an op-ed in the Salt Lake Tribune earlier this month.

Simpson, the former Wyoming BLMer, declined to give his opinion on Stone-Manning.

He is vice president of the Public Lands Foundation, an organization primarily of retired BLM employees that does not take a position for or against nominated directors. He said the organization would hope to work with Stone-Manning and offer its assistance to her if she is confirmed.

“There is no perfect person,” Simpson said, noting the diversity of former BLM leaders. “They’ve all got baggage.”

“Tracy is a proven leader with a track record of working across the aisle to get things done,” Tester said. “She is adept at managing the needs of diverse interests.”

He pointed in particular to her work on the Clark Fork Coalition in Missoula, Mont., which successfully pushed for the removal of the Milltown Dam as part of the restoration of the Clark River and its floodplain, which had been designated as a Superfund site several years earlier.

National Wildlife Federation board member Kathy Hadley recalled working on that effort with Stone-Manning, who she said she has known for nearly 30 years.

While she noted dam removals are often “political hot potatoes, to say the least,” Hadley described Stone-Manning addressing a variety of concerns and audiences, including, at one point, a Republican governor and county commissioners, while promoting the idea that a free-flowing river could offer recreational opportunities and improve local fisheries.

“What Tracy had to do was do a campaign around removing the dam, and she had to engage stakeholders from the people like myself to the naysayers who thought, ‘We’re going to lose cheap power’ and ‘It’s part of our community,'” Hadley recalled. “She was really successful at it.”

She later added: “I think listening — especially in today’s world — and understanding people’s perspectives, especially those that are different of our own, that is a characteristic that is so important, and Tracy is really good at that.”