‘All eyes of the world are on Juliana’ 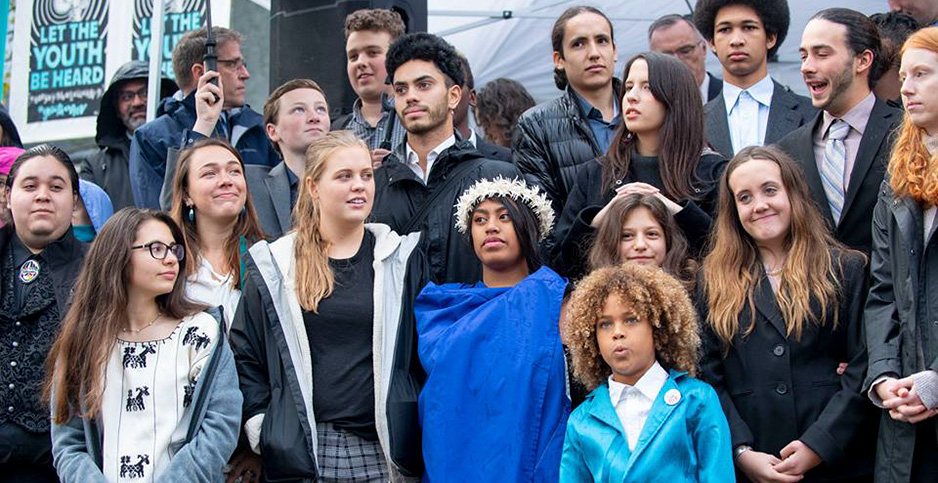 Youth plaintiffs in a high-profile lawsuit against the government over climate change. Our Children's Trust/Facebook

The 21 youth plaintiffs of Juliana v. United States are days away from another milestone in their climate case against the government, a hearing that will determine whether their case gets back on track for what they call "the trial of the century."

A three-judge panel from the 9th U.S. Circuit Court of Appeals will hear oral arguments at the Hatfield Courthouse in Portland, Ore., on Tuesday, the culmination of multiple attempts by government lawyers from both the Obama and Trump administrations to have the case scrapped.

The hearing was originally scheduled for a 40-person courtroom at Pioneer Courthouse but has since been moved to the larger Hatfield venue. Our Children’s Trust, the organization behind the 21 plaintiffs, says it’s expecting more than 1,000 participants at a rally and livestream of the hearing in Portland’s Director Park.

"All eyes of the world are on Juliana," Our Children’s Trust attorney Andrea Rodgers said. "So we’re expecting a sizable audience who will be both in the courtroom and also gathering to support the plaintiffs before and after the arguments."

The kids filed suit in the U.S. District Court for the District of Oregon in 2015, arguing that the feds violated their constitutional right to a safe climate by approving oil and gas production and other development — despite knowing for years that extracting and burning fossil fuels contributes to rising global temperatures.

"It’s vital that courts consider these legal claims on a fully developed, factual record," Rodgers said. "These youth are ready and have been waiting for their day in court."

The government says the district court has no jurisdiction over the case, nor do the kids have standing to sue because their "universally shared and generalized" grievances are attributed to global issues, not specific government actions.

The kids pushed back, insisting that they do have standing and that a trial would reveal how their "concrete, particularized, actual harms" connect to the government’s actions.

Three Obama appointees will sit on the 9th Circuit panel next week: Judges Mary Murguia and Andrew Hurwitz and Judge Josephine Staton, a California district judge who is filling in on the circuit court for the case.

The panel has some background on climate issues. In 2018, Hurwitz authored an opinion scrapping an industry group’s challenge to Oregon’s clean fuel program. Hurwitz referenced the landmark Supreme Court case Massachusetts v. EPA and wrote that "it is well settled that the states have a legitimate interest in combating the adverse effects of climate change on their residents."

UCLA environmental law professor Ann Carlson said there was plenty of "hand-wringing" in Massachusetts v. EPA about whether litigants could connect injuries to actions during a time when the climate crisis was "much less imminent."

But since that decision, she said, the climate problem has been amplified and the science around it clarified enough that standing could be an easier case to make.

"A lot has transpired since the court found that Massachusetts had standing in that case to bolster the connection between greenhouse gas emissions and particular damages and harm," she said. "We’re experiencing harms today that scientists can connect to climate change."

Ranging in age from 11 to 23, the plaintiffs allege that climate change is currently infringing on their health and well-being, and demand a court order that would compel the government to phase out domestic fossil fuel production.

Judge Ann Aiken of the Oregon district court rejected a motion to dismiss the case in November 2016, setting the course for an eventual trial that would, according to University of Oregon law professor Mary Wood, "be the first time the government’s affirmative fossil fuel policy would meet climate science in court."

But despite multiple green lights in Oregon, the kids’ case faced an uphill battle against a slew of emergency bids by the government to derail it.

In 2017, government attorneys asked the 9th Circuit to stay proceedings to consider whether the district court’s decision to let the case fly was made "in clear error." The court declined to intervene.

Federal attorneys also twice turned to the Supreme Court for relief but once again were denied a freeze of proceedings. But the district court relented in November 2018 and certified its prior orders in the case, setting them out for full review by the 9th Circuit.

Wood said avoiding trial is crucial for the Trump administration: "When the facts come out, it will portray government as creating this enormous, almost unfathomable danger for us all.

"At one point they have motions in all three levels of the judicial system; I’ve never actually seen that before," she added. "It was like a three-ring circus trying to keep track of everything because they literally had motions in front of the district court, the 9th Circuit and the U.S. Supreme Court."

"A court could simply restore the process of litigation that the Trump lawyers derailed," she said. "That’s very important because the trial is the process which illuminates the law, and without a trial the judges are operating in a dark room."

But Bracewell LLP energy lobbyist Jeff Holmstead maintained that the plaintiffs are unlikely to win their legal arguments.

"Certainly the lawyers who are representing these plaintiffs are sophisticated enough to know that there’s no way that this case will actually succeed in getting a court order for the United States government to stop the production of fossil fuels," he said.

He said he believes the plaintiffs’ ultimate aim is to shed light on the climate crisis, "a highly publicized trial" to call attention to their concerns. Holmstead and other experts are skeptical the case will ever go to trial.

"I think it’s a heavy lift to have the 9th Circuit recognize a constitutional right to a stable climate, which is essentially the basis of the district court’s opinion," said Carlson, the UCLA professor. But she said she’s eager to hear what the 9th Circuit panel says about standing.

She noted that some of the plaintiffs have filed "very powerful" affidavits describing their personal injuries from climate change.

"And it’s really important in part because what the court says about standing in this case is likely to have repercussions for other climate change cases," she said.