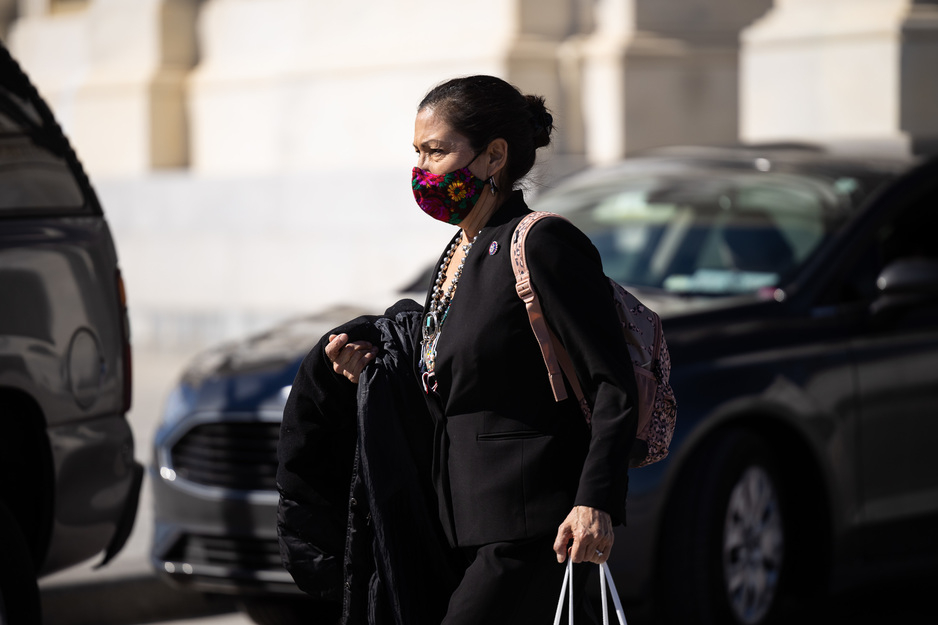 The Senate Energy and Natural Resources Committee will meet this morning to decide whether to favorably recommend to the full Senate the nomination of Rep. Deb Haaland to serve as Interior secretary.

It’s a vote that could either forecast the extent of the partisan divide that awaits her on the chamber floor or belie the true nature of her bipartisan appeal.

It’s also one where, yet again, Sen. Lisa Murkowski (R-Alaska) could be a pivotal vote.

Collin O’Mara, the president and CEO of the National Wildlife Federation that has been closely watching the New Mexico Democrat’s confirmation proceedings, told E&E News yesterday that there were "potentially more than a dozen ‘yes’ votes on the Republican side of the aisle" beyond the confines of the Energy and Natural Resources Committee.

And that number doesn’t just count Sen. Susan Collins of Maine, who yesterday became the first Republican to publicly support Haaland for the job (Greenwire, March 3).

If that’s true, that would undermine the rhetoric that has emerged over the past few weeks from Haaland’s harshest GOP critics, many of whom sit on Energy and Natural Resources — specifically, that Haaland is a "radical" who would be lucky to get even one Republican to support her confirmation.

It would also paint a less dire picture for Haaland coming out of the committee, where there is a real possibility Democrats and Republicans could vote along party lines and the ensuing tie results in Haaland being recommended "unfavorably" — a fate that befell Health and Human Services secretary nominee Xavier Becerra yesterday morning.

Though this outcome has no bearing on a nominee’s ability to be confirmed, it is far from optimal from an optics perspective.

All 10 Republicans on the Energy and Natural Resources Committee hail from states with some dependence on oil and gas, and each grilled Haaland during her two-day confirmation hearing last week over past statements protesting pipelines and opposing fracking and drilling on public lands.

Each also questioned whether Haaland would seek to push President Biden further to the left on these issues, saying the president has already established dangerous precedent with a duo of executive orders targeting the fossil fuel industry he issued his first days in office.

"This week’s hearing confirmed what I feared from Rep. Haaland’s record and our one-on-one conversation — she’s a hard-line ideologue with radical views," said Sen. Steve Daines (R-Mont.), a committee member, in a statement last week.

"I will oppose her nomination, work to defeat it and urge my colleagues to do the same," he said.

Ahead of the vote this morning, the committee released Haaland’s answers to questions for the record from members of the panel.

The Republican on Energy and Natural Resources most likely to break from the pack and vote "yes" on Haaland this morning is Murkowski.

She insisted in an interview with E&E News yesterday, however, that she had yet to make up her mind.

"I have spent considerable time with [Haaland] trying to convey the Alaska-specific issues that I share with every incoming Interior secretary, to make sure that I’m not making assumptions about what it is that they know about Alaska’s situation," said Murkowski, the former committee chairwoman and the top Republican on the Interior-Environment Appropriations Subcommittee.

In addition to watching two days of testimony during Haaland’s confirmation hearing and participating in three rounds of questioning, Murkowski said she held two separate, hourlong phone calls with the nominee.

She signaled she would make her final decision based on Haaland’s command of Alaska issues, given Interior’s outsize management role in a state where 60% of the land is owned by the federal government.

"I’ve been more than a little disappointed in some of her responses to me because they demonstrate that she doesn’t have an understanding in many of these areas that she has committed to me over and over and over again that she understands the priority," Murkowski conceded.

But, she added, Haaland "wants to be helpful, she wants to learn. I’m listening to that."

As she makes her final decision, Murkowski said she also would continue to listen to Alaskans, including Republican Rep. Don Young.

The dean of the House and the state congressional delegation’s senior member, Young introduced and endorsed the nominee before the Energy and Natural Resources Committee last week.

"I think that is significant," Murkowski said of Young’s backing. "The Alaskans that have weighed in with me have been overwhelming in their support of her, and I take that feedback very seriously."

Murkowski’s vote would be a major victory for Haaland and her allies, who have played up the nominee’s bipartisan record as a second-year congresswoman even as she has become a figure of intense partisan opposition on Capitol Hill as a Cabinet nominee.

Support from Murkowski could also, paired with Collins’ pledge of support, open the floodgates for other Republicans to vote "yes" on Haaland, no longer fearful of having to be the first to cross party lines.

O’Mara predicted the full extent of the "historic" nature of Halaand’s nomination would only grow in the coming days among Republican lawmakers as they make their final decisions: Haaland would be the first Native American to ever serve in a Cabinet position and the first Indigenous person to preside over the very federal agency that has historically been antagonistic of tribal communities.

"She has inspired supporters," agreed Alex Taurel, the conservation program director with the League of Conservation Voters, which is also following the Haaland confirmation process closely and will "score" votes on the nomination.

"We hear this constantly, from our members, from our state LCVs: There is just not another nominee out there who is inspiring the same kind of passion she is."

A modest bipartisan vote on Haaland’s confirmation on the Senate floor, however, is not guaranteed. A lot could happen between the time the committee votes today and the full Senate meets to vote on confirmation in the coming weeks.

Biden could put forward new executive actions that further alienate Republicans who already see his energy agenda — and, by extension, Haaland’s — as detrimental to the U.S. economy.

Powerful interests off Capitol Hill could lean heavily on GOP senators to oppose Haaland, specifically those lawmakers who are not yet publicly committed one way or the other.

If Murkowski votes "no" in committee, Haaland’s detractors will use that as proof she’s a divisive candidate unqualified to lead the Interior Department. And even if Murkowski votes "yes" today, that doesn’t mean she’s obligated to do the same on the Senate floor as she continues to collect more information and mull her decision.

There’s also one key Senate Republican who has not yet spoken, whose voice will be critical in determining whether rank-and-file members are free to vote on their own or stand with the team: Minority Leader Mitch McConnell.

The Kentucky Republican was an early ringleader against doomed Office of Management and Budget director nominee Neera Tanden and has vocalized distrust for Becerra. He has yet to speak out about Haaland.