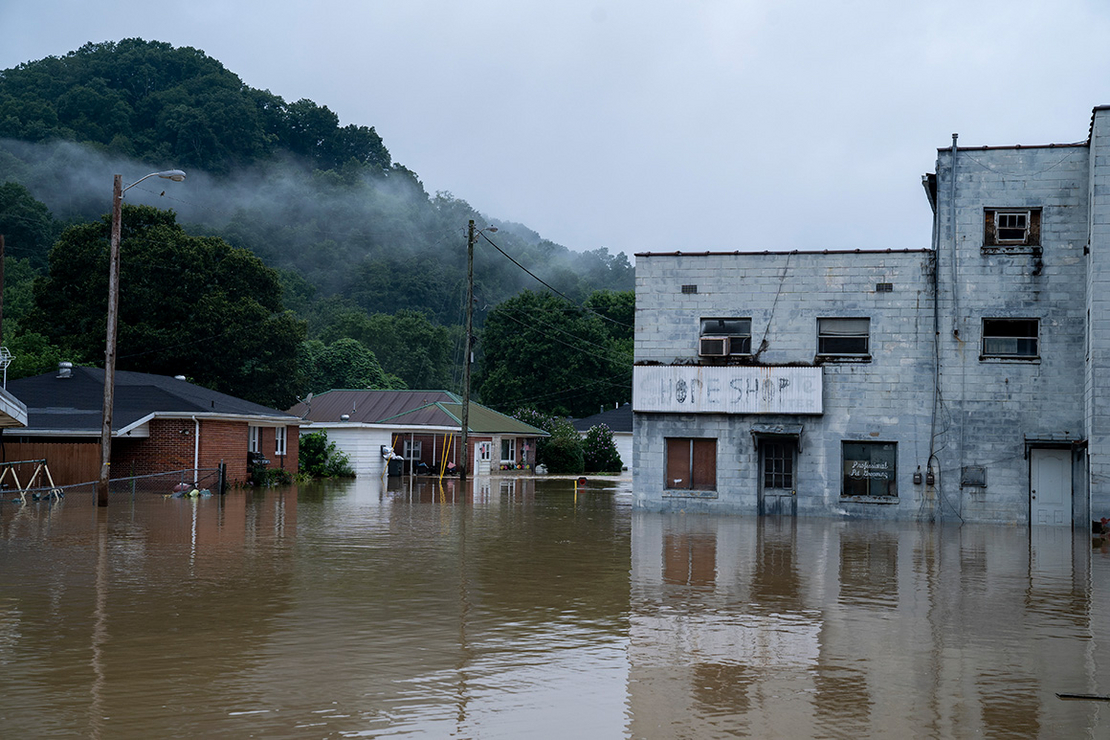 Flooding in downtown Jackson, Ky., on July 29. Only a fraction of state homeowners have flood insurance. Michael Swensen/Getty Images

Kentucky residents who are struggling to rebuild after devastating flooding face huge financial obstacles because almost nobody in the state has flood insurance.

The area hit by the flash floods that began in late July and killed at least 37 people has a large concentration of low-income families.

Only 17,250 property owners in Kentucky have federal flood insurance, government records show. The public program provides the vast majority of flood policies in the United States.

A recent Federal Emergency Management Agency report found that Kentucky has a low rate of flood coverage and ranks just behind New Mexico in the percentage of residences with flood insurance.

In the 10 counties in eastern Kentucky that sustained significant flood damage in recent weeks, just 2,485 property owners have coverage through FEMA’s National Flood Insurance Program, an E&E News analysis of federal records shows. That’s about 2.3 percent of households in the 10-county area.

Many Kentucky residents decline to buy flood insurance because they think the premiums are too costly and the risk of being flooded is too remote, said Britney Hargrove, a spokesperson for Knott County, which sustained extensive flood damage.

“A lot of families don’t have that extra money to pay for something that may or may not happen,” Hargrove said.

Flood coverage is sold separately from homeowners’ insurance policies and is considered vital to disaster recovery because policyholders can collect up to $250,000 in claims payments. Federal disaster aid, on the other hand, typically pays residents just a few thousand dollars and covers only temporary home repairs.

The absence of flood insurance and the minimal disaster payments from FEMA are forcing residents to rely on private charity, Hargrove said.

“That is going to be what makes or breaks the county — the foundations and the amount of donations that come in,” Hargrove said.

Another factor discouraging the purchase of flood coverage is that FEMA flood maps have vastly underestimated the flood risk in eastern Kentucky, according to a groundbreaking analysis in 2020 by the nonprofit First Street Foundation.

The FEMA maps were especially inaccurate in eastern Kentucky, the foundation found.

“There is a significant portion of people there that don’t know they’re in a flood zone because they’re not in a FEMA special flood hazard area,” said Jeremy Porter, head of research for First Street.

In seven of the 10 flooded counties in Kentucky for which property records were available, First Street found that 40,300 properties faced a significant flood risk. FEMA flood maps showed only 12,800 properties in those seven counties were in a flood zone.

FEMA’s National Risk Index rates each of the 10 counties as having a “relatively low” or “relatively moderate” risk of riverine flooding.

FEMA has acknowledged that its flood maps can be misleading and has warned for years that people who live outside of a designated flood zone are nonetheless susceptible to flooding. People who live in a FEMA flood zone and have a federally backed mortgage are required to have flood insurance, though many people flout the requirement.

When flooding from Hurricane Ida caused 11 New York City residents to drown last year, Rep. Carolyn Maloney (D-N.Y.) disclosed that the homes where the drownings occurred were all located outside of FEMA flood zones in areas considered to have a minimal flood risk (Climatewire, Oct. 6, 2021).

One problem with the FEMA flood maps is that they only account for flooding along the coast or from major rivers. They do not account for flash floods such as those that recently devastated Kentucky, which result from intense rainstorms that overflow small streams or municipal sewer systems.

“They really only take into account major river channels and coastal flooding, not rainfall or small waterways,” Porter said. “That leaves out huge portions of the country that are susceptible to rainfall-driven flooding.”

FEMA Administrator Deanne Criswell acknowledged last year to Maloney that the agency’s flood maps “do not take into account [overflows of] the storm sewer systems.”

The low rate of flood insurance coverage in eastern Kentucky highlights long-standing problems with the affordability of flood policies. FEMA has warned for years that households with lower incomes are far less likely than higher-income households to buy flood insurance (Climatewire, April 6, 2021).

Hargrove, the Knott County spokesperson, said a subsidy program for flood insurance “would be an incredible asset to the people of Kentucky.”

Asked about the low level of flood coverage in Kentucky, FEMA said in a statement to E&E News that it is focused on “recovery efforts and helping survivors register for much-needed assistance.”