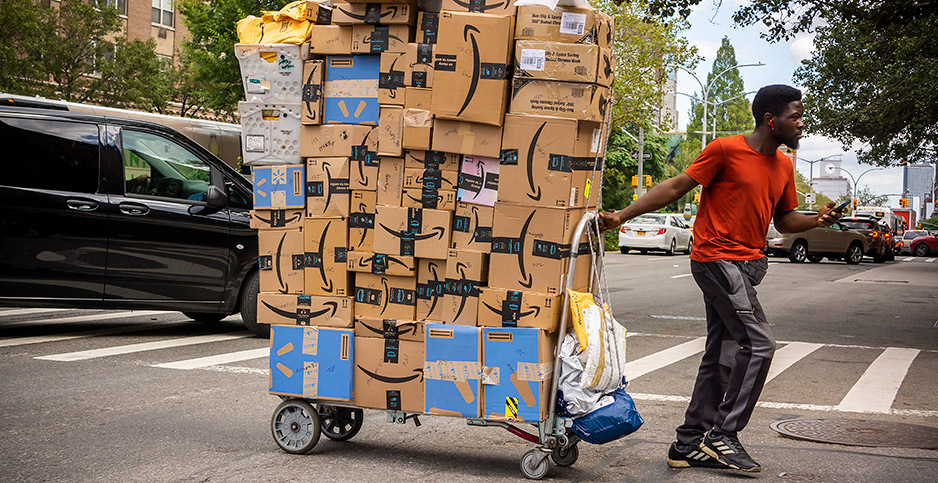 A worker delivers a pile of boxes, mostly from Amazon, in the Soho neighborhood of New York. Richard B. Levine/Newscom

U.S. paper mills hope to take advantage of the "Amazon effect" this holiday season and recycle a glut of used cardboard boxes into new paper products.

After the decline of newsprint, the rise of e-commerce is helping American paper mills transition to containerboard, or cardboard, because behemoths like Amazon.com Inc. are driving up demand.

Meanwhile, China, formerly the world’s top destination for exports of solid waste, in 2018 stopped accepting imports of recyclables too contaminated with garbage.

Last year, cardboard accounted for nearly 48% of U.S. paper capacity, up from about 38% a decade ago, according to the American Forest & Paper Association, an influential trade group.

Bell added that inexpensive used cardboard has encouraged foreign investment in U.S. paper mills, as companies seek to move closer to the source of cheap commodities.

"On the positive side, we are seeing much more investment in U.S. paper mills, and China’s largest mill group is one of those companies making large investments in the U.S.," he said.

That Chinese company is Nine Dragons Paper Holdings Ltd. It has bought paper mills in Wisconsin and West Virginia and revamped one that had previously closed in Maine.

Its West Virginia mill produces pulp completely from recycled materials. Shredded paper and cardboard get soaked in water until fibers are broken down. Some mills use chemicals like sulfur, which emits a rotten-egg smell, in the pulping process.

After the pulpy material is filtered to remove tape, plastic and other contaminants, it is dried and ready to be converted into paper or cardboard.

Pulp from Nine Dragons mills is either shipped to U.S. manufacturers or exported, mainly to China.

And years of shipping contaminated recyclables to China created unsustainable consumer habits that the domestic recycling industry is now paying for, said Terry Webber, the executive director for packaging at the American Forest & Paper Association. American facilities are having to clean up the mess they used to depend on China to deal with.

Contamination remains an issue for the paper industry, Webber said. "Our industry does an extraordinary job of recycling old paper into new paper, but we haven’t developed technology yet to turn food into paper, and we can’t turn plastic into paper," he said.

Last year, the paper industry used about half virgin materials and half recycled materials to make new cardboard.

Cardboard boxes reached a record recovery rate in the United States in 2018, when more than 96% were recycled, according to AF&PA. It’s a rare success story for recycling, considering that the rate for plastics is less than 10%.

"Here’s where I’ll be humble and say we do a lot better than they do," Webber said.