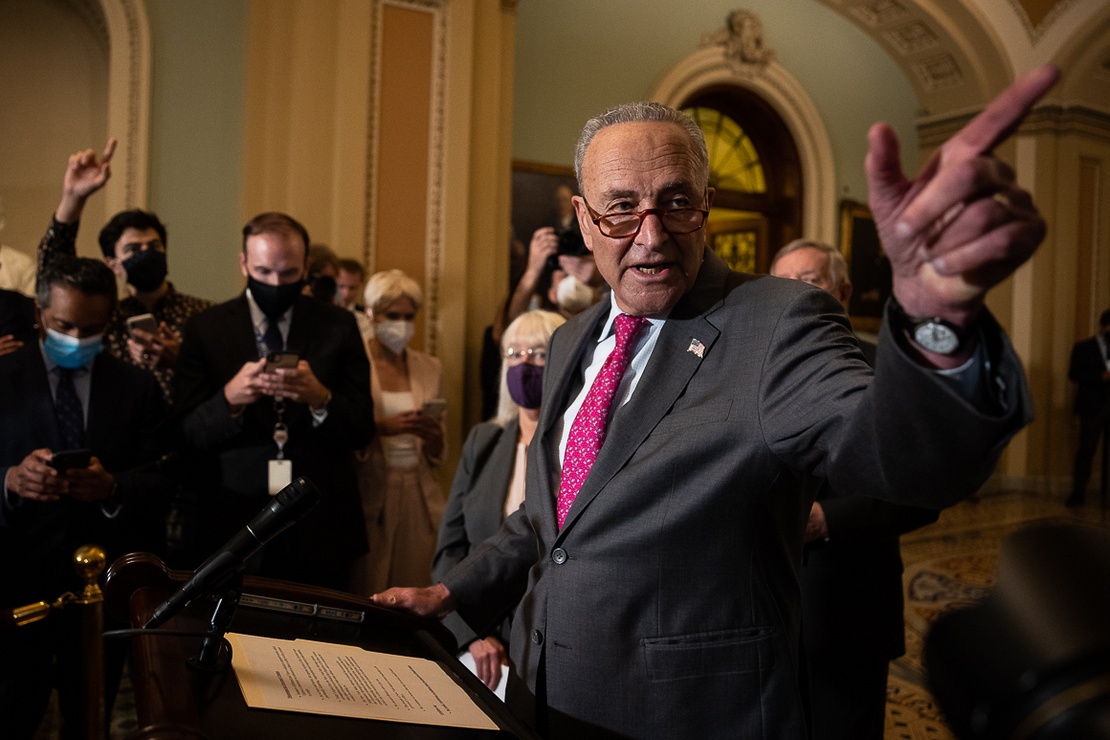 Senators are bracing for a likely weekend session and to remain in session into the scheduled August recess as they continued plowing through a backlog of more than 300 amendments to the bipartisan infrastructure package.

The chamber voted on five amendments yesterday, including a successful proposal from Sen. Chris Van Hollen (D-Md.) to attach payment and performance security requirements for infrastructure financing, and a proposal from Sens. Ted Cruz (R-Texas) and Raphael Warnock (D-Ga.) to designate additional high-priority corridors on the National Highway System.

Another amendment, from Sen. Mike Lee (R-Utah), to gut the bill and overhaul National Environmental Policy Act permitting failed, however, 20-78, as did one from Sen. Tammy Duckworth (D-Ill.) that would have required recipients of station accessibility grants to adopt transportation accessibility projects (E&E News PM, Aug. 3).

The pace and limited number of amendment consideration had Republicans reiterating their calls for an extended amendment process, given that the Senate is likely to be in session next week anyway to take up a budget resolution that lays the groundwork for Democrats’ $3.5 trillion reconciliation bill.

Senators will reconvene later this morning and take up at least one more amendment: a proposal from Sen. Ron Johnson (R-Wis.) that would prohibit the cancellation of construction contracts related to the U.S.-Mexico border wall. Additional votes will likely follow.

Majority Leader Chuck Schumer (D-N.Y.) held off on moving to wind down debate on the bipartisan package to appease Republicans. “We’re going to stay here as long as it takes to get this done,” Schumer told reporters.

Even with calls for more amendment consideration, Minority Leader Mitch McConnell (R-Ky.) suggested yesterday that he would like to vote for the final product, despite intense GOP opposition to the partisan budget resolution.

McConnell was one of 67 senators who supported the initial procedural votes on the bipartisan bill. “I’m interested in what it looks like at the end, but I’m in favor of trying to get an outcome on a bipartisan infrastructure package,” McConnell told reporters.

Many senators are planning to attend the funeral for former Sen. Mike Enzi (R-Wyo.) Friday, meaning procedural motions and final passage could bleed into the weekend.

In search of a manager’s amendment

Typically, the Senate would also take up a manager’s package that includes less-controversial amendments and technical fixes to the bill. Sen. Ben Cardin (D-Md.), a senior member of the Environment and Public Works Committee, yesterday said that hadn’t been decided on yet.

“This is how the process normally works,” Cardin said in an interview. “It’s a little frustrating, because there’s really not specific committees that would normally have jurisdiction, and we don’t know whether there’s going to be a manager’s package.”

Proposals continued to pour in yesterday, including several on critical minerals. One amendment, from Sen. Steve Daines (R-Mont.), would streamline permitting for critical minerals production. Cardin has an amendment that would create a production tax credit for zero-emissions nuclear power.

Sen. John Barrasso has also floated proposals to ban funding for zero-emissions vehicles purchased from China and to terminate the electric vehicle tax credit, a longtime priority for the Wyoming Republican.

But if the Senate does clear more amendments, they are unlikely to make changes to the major provisions of the deal or the top-line spending number, which adds up to $550 billion in new spending, as negotiators of the package look to maintain the delicate balance struck with the White House on the deal.

Minority Whip John Thune (R-Wyo.) told reporters that the group of 22 senators who negotiated the bill will hold heavy sway over which proposals get tacked on. “It’s going to be, I think, largely up to that group which amendments get considered,” Thune said.

Another potential wild card this week could be the release of the Congressional Budget Office’s score for the bill. It will offer more clarity on the deal’s pay-fors, which include a return of the Superfund tax and a sale from the Strategic Petroleum Reserve.

“People are going to be drilling down, looking carefully at how real these are, and the official CBO scorecard, when it comes out, will be pretty determinative for a lot of people,” Thune said.