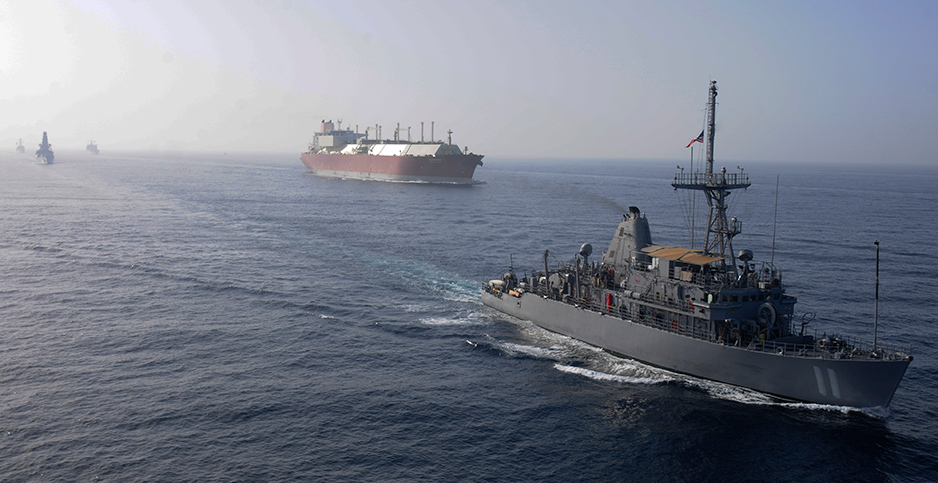 Energy companies are urging the Trump administration to promote natural gas as the president praises coal. A liquefied natural gas tanker is shown being escorted by U.S. warships during an exercise in 2013. U.S. Naval Forces Central Command/Flickr

As the Trump administration marches forward with its plan to aid economically distressed coal and nuclear power plants, the natural gas industry is looking for recognition from the White House.

Frustration has been building between oil and gas companies and the administration. Battles over renewable fuel policy, tariffs on steel that goes into pipelines and a confusing rollout about plans to allow offshore drilling have heightened tensions.

While those actions have stirred animosity, none has come close to eliciting the kind of angst stemming from the administration’s proposal to keep ailing electricity generators afloat on national security grounds. It’s a clear loser for the natural gas industry because the plan would extend support to competitors in the power sector. In turn, that could depress booming gas production.

The industry increasingly is turning to exports of natural gas as a way to soften the blow from an administration determined to assist its flailing domestic coal industry. That, too, has faced headwinds. President Trump’s trade wars have put liquefied natural gas in the crosshairs. China, the world’s biggest growth market for natural gas exports, is considering hitting U.S. fuel with a 25 percent tariff.

"If you make it more expensive for grid operators to purchase natural gas power, then there’s a surplus of natural gas capacity," an industry source said. "What we’re saying is start negotiations now. Get something done for us in the next year, so as soon as this thing happens, we have an outlet to make up for the loss that we’re not selling here."

To some, that was acknowledged in late July when the United States and the European Union announced efforts to ship more American LNG overseas. Trump and European Commission President Jean-Claude Juncker said they agreed to a deal after meeting at the White House.

That wasn’t altogether accurate. European import terminals are far from fully utilized. Perhaps some new import infrastructure could be built in underserved markets, like Croatia, but that’s at the margins. Besides, federal governments aren’t the entities that strike LNG deals. That’s left to private companies.

"Promises to sell LNG to other countries do not assuage the concerns that industry has on all things trade-war-related or the nuclear bailout issues — mostly because on the gas trade overture front, the government plays a very small role in creating commercial opportunity, whereas they can do real damage to project costs and domestic market opportunities on the other two fronts," Sarah Ladislaw, director and senior fellow of the Energy and National Security Program at the Center for Strategic and International Studies, said in an email.

In the end, advancing trade ties with Europe is a blip in the overall picture.

It’s the combination of Trump’s protectionist trade policies and the potential bailout of nuclear and coal facilities that bothers Dan Eberhart, CEO of oil services company Canary LLC and a GOP fundraiser. Eberhart said he questioned the coal and nuclear proposal in an energy forum last month in Bismarck, N.D., with Energy Secretary Rick Perry.

"Honestly, I think it’s very narrow for them to be so focused on coal. Either energy- or political-wise, it doesn’t make a lot of sense to me," Eberhart said. "Not all of these policies seem to work in concert together. [Trump’s] trade policies step on American energy dominance. They are for LNG exports, and Perry is going to stump for them, but they’re for this resiliency plan that stomps on natural gas."

The natural gas industry’s anxiety builds out of a political problem it never anticipated — that a GOP president would so radically upend trade and free-market philosophy, said Amy Myers Jaffe, an energy expert and senior fellow at the Council on Foreign Relations. She said companies were laser-focused on the potential to end environmental regulations they found burdensome, which Trump said he would do, and ignored his decadeslong criticism of U.S. trade policy.

It was under former President Obama that the natural gas industry soared, she noted. Approvals for export terminals, while criticized by industry defenders as taking too long, got their start under Obama, she said. Although he didn’t like taking credit for it, the expansion of natural gas also buoyed Obama’s climate change credentials, as its replacement of coal in the domestic power sector reduced carbon emissions. There’s a chance the same would have been true globally if it pushed out coal in markets like China.

The gas industry has been hesitant to openly criticize Trump, Jaffe said. But she said the president’s trade policies squandered an opportunity for companies that want to send their gas abroad. U.S. gas is prized because it’s linked to the Henry Hub price — a major distribution point on the natural gas pipeline network — that delinks it from world oil prices. At the same time, long-term contracts between Qatari and Russian suppliers and their customers are ending between 2020 and 2022. That meant the United States had a built-in advantage for securing new buyers.

Still, others said buyers are shifting away from long-term contracts. More fuel is being purchased on spot markets and on a short-term basis, underscoring a rapidly evolving natural gas market.

That doesn’t mean the United States is out of the woods, though. The rancor with China is worrisome, an oil and gas industry source said, noting that uncertainty is starting to undermine some confidence in U.S. suppliers.