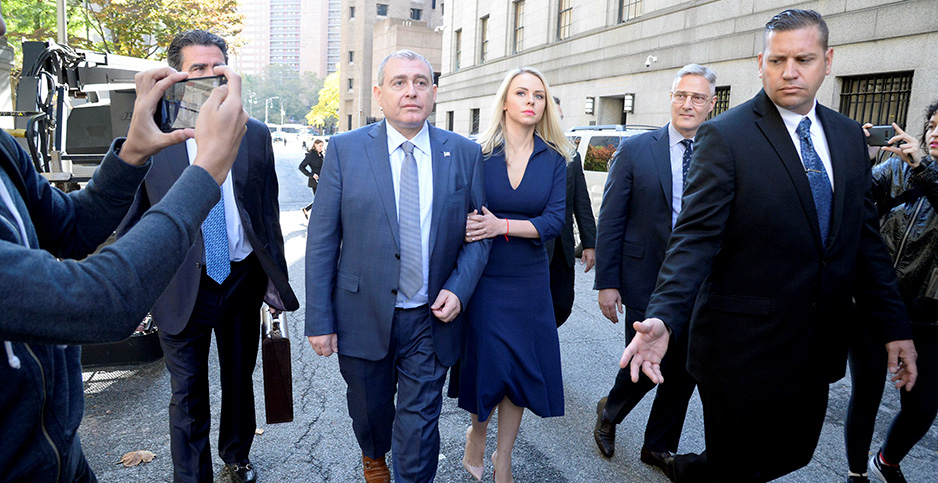 When Dale Perry met up with his former business partner earlier this year, he heard a troubling tale about allies of President Trump’s lawyer, Rudy Giuliani, and their efforts to manipulate Ukraine’s reforming energy market.

Perry was talking with Andrey Favorov, who is now an executive at Naftogaz, Ukraine’s state energy company. Perry told E&E News that what he heard was so "shocking" that he immediately wrote it down and submitted it to the State Department.

"When I was writing it, I was saying, ‘Am I crazy here? This can’t really be happening," Perry recalled.

In Perry’s recounting, Favorov said two associates of Giuliani, and a Florida energy billionaire, wanted to install one of their allies as head of Naftogaz and then use their political connections in the United States to make natural gas deals, according to a memo he sent to the U.S. Embassy in Kyiv. More troubling, he said, was that Lev Parnas and Igor Fruman, two businessmen with connections to Giuliani, were claiming to have advance knowledge of internal machinations within the U.S. government. They seemed to know that Marie Yovanovich, who was then U.S. ambassador to Ukraine, would soon be removed. There is no indication that Giuliani was part of the effort to replace the head of Naftogaz.

Perry’s revelations were one of the first indications that Giuliani and two of his associates were seeking top-level meetings in Ukraine with politicians and energy executives. In 2014, a student-led revolution ousted Ukrainian President Viktor Yanukovych and led to a series of anti-corruption reforms, including at Naftogaz.

Energy issues are ingrained in Ukraine’s national security efforts in part because the former Soviet satellite has been reliant on Russia and its supply of natural gas. At the same time, Naftogaz was under the sway of oligarchs who profited from insider deals and opposed an open market. In recent years, Naftogaz has shifted toward a liberalized market, a reform that encouraged outside investments and provided a bulwark against Russian influence.

The Ukrainian-American businessmen served as Giuliani’s fixers in Ukraine, helping him promote conspiracy theories that erroneously blamed Ukrainian hackers for meddling in the 2016 American election. Separately, Parnas and Fruman have been charged with breaking campaign finance laws. On Monday, Parnas said through his lawyer that he would cooperate with the impeachment inquiry.

The memo that Perry submitted to the State Department in April became public this week when Democrats released the transcript of Yovanovich’s testimony that she gave to impeachment investigators last month. Yovanovich received the memo as she was packing her office belongings in Kyiv after being recalled to the United States.

She told lawmakers that Perry’s letter was one of the first times she had heard of Parnas and Fruman and their alleged attempts to improve their own business relationships by pressing for a new head of Naftogaz, according to the transcript of her testimony. She said Parnas and Fruman wanted her to be replaced because they "needed a better ambassador to sort of facilitate their business efforts here."

"They felt that our policy to try to make Ukraine stronger and more resilient, through the anticorruption policies as well as through, you know, the other assistance that we’ve talked about today, and that our policies and our actions, and specifically my actions, as the leader of the U.S. Embassy, were, you know, problematic for them," Yovanovich told lawmakers.

Their efforts to install a business ally at the head of Naftogaz would have weakened reforms to reduce corruption in the Ukrainian energy sector, which had only recently emerged from its shadowy past as a murky state-controlled market, Yovanovich testified. She said the head of Naftogaz, Andriy Kobalyev, is as "clean as they come" and has successfully shifted the country away from a complete reliance on Russian gas, but that more progress is needed.

"It’s really cleaned up its act," Yovanovich said. "I mean, we consider it to be one of the success stories in Ukraine. But that doesn’t mean it’s done. I mean, there’s still issues going forward."

As Parnas and Fruman allegedly sought to force out the head of Naftogaz and the ambassador they believed stood in their way, Trump administration officials pushed for changes at Naftogaz, according to testimony released yesterday. Energy Secretary Rick Perry wanted to expand the board of Naftogaz and install two executives in those seats, according to text messages obtained during the inquiry. The messages were between Bill Taylor, the acting U.S. ambassador to Ukraine, and Kurt Volker, the former special envoy for Ukraine negotiations.

"Kurt, what’s the view of Kobalyev among the three of you?" Taylor wrote in June, referring to the chief executive of Naftogaz.

"I think Perry is the most negative — sees him as obstructing both the upstream and downstream opening up of the market. Perry also wants 2 senior US energy industry people on an expanded board," Volker responded.

"I remember Naftogaz before the reform, so I know K did a lot of good," Taylor wrote, referring to Kobalyev. "But now he needs to get behind even more ambitious reform. He is capable of doing it, but he needs to be committed to it."

Dale Perry said the revelations that Parnas and Fruman, along with Florida billionaire Harry Sargeant III, were trying to replace the reformer at Naftogaz troubled him deeply. He feared it would have taken Ukraine’s newly liberalized energy market back to a time when it was controlled by secret deals that benefited insiders. Parnas and Fruman wanted to steer energy contracts to their business, Global Energy Producer LLC, Perry said. Parnas and Fruman were charged last month with making illegal campaign contributions through Global Energy Producers and other sources.

They were also pushing to have Naftogaz pay $200 million to a Ukrainian oligarch, Dmytro Firtash, who is now awaiting extradition to the United States on federal bribery charges. Giuliani has been using documents obtained by Firtash to push for an investigation of Biden. Firtash remains a major player in Ukraine’s energy market, and controls about 70% of its gas distribution.

Perry has been operating in the region for more than 20 years and said his company, Energy Resources of Ukraine, can only succeed in the type of open, liberalized market that has existed for the last five years.

"We could not operate as we do if it were still in a corrupt paradigm as it existed up until the year 2014," Perry said in an interview. "These guys who approached my former partner wanted to take it back to the way it was before 2014, where corrupt people ran the industry, corrupt and not corrupt, and my thought was this is not where Ukraine was headed, and I thought it was shocking."

In a statement from his lawyer, Sargeant, the Florida billionaire, acknowledged that he had met with Parnas, Fruman and Favorov over dinner. He denied "any role or participation in any Ukraine venture, nor any specifics regarding the potential business ventures of the other dinner participants."

Last week, the Ukrainian government took another step toward modernizing its energy market to bring it in line with other European countries by splitting Naftogaz into production and transportation companies. With American assistance, the country has been working to increase its energy security to make it less reliant on Russian gas.

Some see the breakup of Naftogaz as a central reform to the future of Ukraine’s energy market as it tries to attract outside investors.

"It is the system that is screwed up, the system that did not allow private companies both domestic and foreign to engage in exploration [and] production and left distribution in the hands of tainted oligarchs such as Dmytro Firtash," said Ariel Cohen, a senior fellow at the Atlantic Council who was born in Crimea. "As long as Naftogaz wants to be the Gazprom of Ukraine, wants to both explore, produce, regulate and control distribution, it’s not going to work."

Ukraine’s energy market is still vulnerable to manipulation, he said.

While the Ukrainian market has improved in recent years, the pace of reform has been slow, Cohen said. Cohen, who recently returned from Ukraine, said oligarchs still wield tremendous control over the sector and that, even as U.S. officials push for more reform, Ukraine is still reliant on Russian electricity, coal and gas imports. That inhibits real reform, he said.

"It is still not the good governance that would open the oil and gas sector to domestic competition for both domestic and foreign companies and for competitive imports for gas from the West," he said.