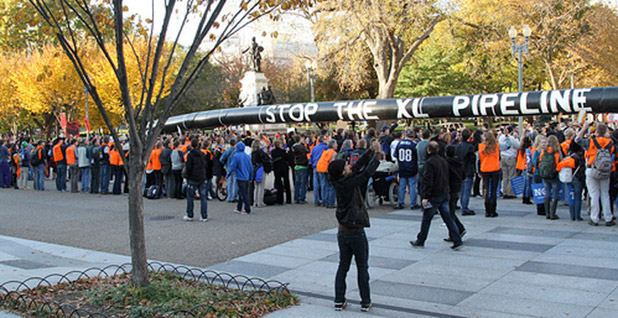 After nearly a decade of turbulent legal and regulatory fights over the Keystone XL pipeline, state officials in Nebraska are ready to decide whether the project moves forward.

The state’s Public Service Commission plans to issue a decision today on TransCanada Corp.’s proposal to ship Canadian oil through the Cornhusker State. Commissioners will vote on the company’s application in a public meeting this morning.

The five-member commission’s approval is the final major regulatory hurdle before developers can finally bring the project to life after years of intense public scrutiny. Legal battles, however, will continue.

Opposition to Keystone XL kicked off a high-stakes national conversation about whether the United States and Canada should continue investing in fossil fuel systems as the planet warms.

Over seven years, the Obama administration conducted several rounds of in-depth study into the pipeline’s impacts and ultimately rejected TransCanada’s proposal in late 2015.

President Trump revived the project earlier this year, calling it an "incredible pipeline" and signing off on a key cross-border permit.

States along the route have approved the plans — except Nebraska, which hosted a string of public hearings this year to weigh input from TransCanada, landowners, tribes, businesses, environmental groups and others.

The Republican-majority commission must decide whether the project is in the public interest. The regulators have focused their review on two route options: TransCanada’s preferred path cutting diagonally across the eastern half of the state or a "mainline alternative" that tracks more closely with the existing Keystone pipeline.

The existing pipeline leaked 5,000 barrels of crude oil last week, prompting calls by environmentalists for the commission to study safety issues before issuing a decision on Keystone XL.

Questions have also persisted over whether Keystone XL is even economical anymore. TransCanada said earlier this month that it had enough interest from oil shippers to build the project but has not yet finalized terms.

Not surprisingly, the fight over the pipeline will not end there. If the commission allows the project to proceed, new lawsuits will populate the dockets in Nebraska state courts, and existing litigation will move forward with renewed urgency. If the application is denied, TransCanada may head back to court.

Here’s a look at the legal landscape:

What’s next for Nebraska landowners?

Nebraska farmers and other landowners have been at the heart of the Keystone XL debate since the beginning.

In proceedings before the Public Service Commission, a group of nearly 100 landowners with property along TransCanada’s proposed route opposed the project, arguing that it was not in Nebraskans’ best interest.

They argue that TransCanada failed to prove any social or economic benefits for the state from the preferred route. The landowners, represented by the Domina Law Group, say the mainline route would be better because it would have a smaller footprint by paralleling much of the existing pipeline’s route.

The landowners are expected to challenge the commission if it approves TransCanada’s proposal.

"Obviously, we’re committed to seeing this through through whatever means necessary, and we’ll have to evaluate them at the time," Domina Law Group attorney Brian Jorde told E&E News.

Jorde declined to give details on what next steps landowners might take, but any appeal to the commission’s decision must be filed with the Nebraska Court of Appeals within 30 days.

"After we carefully consider the order and everything it means, then we’ll discuss our recommendations," Jorde said.

If TransCanada’s preferred route is approved, the company and landowners would also end up in eminent domain proceedings. Approval of the mainline route, meanwhile, would rope in a new set of landowners (Energywire, Aug. 11).

TransCanada has not said whether it plans to sue if its preferred route is rejected.

"I will not speculate on our next steps following the PSC’s decision," spokesman Terry Cunha said in an email, adding that TransCanada believes the project will support American energy needs.

Will environmentalists and tribes go to court?

Environmental groups and two tribes — the Yankton Sioux Tribe and the Ponca Tribe of Nebraska — also raised objections to TransCanada’s application during the PSC process.

"We would have to look at the decision and decide whether to appeal, but I think appeals are likely," Sierra Club attorney Doug Hayes said.

The Sierra Club and Bold Alliance, a grass-roots group formed to oppose Keystone XL, made their arguments together in recent filings to the commission. Though proceedings steered clear of environmental issues, which the PSC deemed beyond its jurisdiction, the groups argued that TransCanada failed to demonstrate that the pipeline is in the public interest.

"A review of the record indicates that what TransCanada really means by the term ‘public interest’ is actually its own self-interest, divorced from the real interests of the citizens of Nebraska," the groups told the commission.

The two tribes have similarly argued that TransCanada did not meet Nebraska’s public interest standard, which requires the commission to consider economic and social impacts.

Lawyers for the Yankton Sioux Tribe argued that the company neglected to weigh the social impacts at all, including, for example, the effects of construction worker camps on nearby communities.

If TransCanada’s proposed route is approved, potential challenges from environmentalists and the tribes would also go before the Nebraska Court of Appeals.

What about federal litigation?

While a new round of state-level challenges in Nebraska may be on the horizon, federal lawsuits are already in progress.

The U.S. District Court for the District of Montana is currently weighing whether to dismiss their claims. A decision is expected any day (Energywire, Oct. 12).

If the judge tosses their challenges, they could take their case to the 9th U.S. Circuit Court of Appeals.

They also have additional hooks for future challenges, as a few federal approvals for Keystone XL remain pending. The Army Corps of Engineers still must sign off on water crossings for the project, and the Bureau of Land Management must approve rights of way across public lands in Montana.

Environmentalists say the BLM needs to prepare an updated review under the National Environmental Policy Act before approving any rights of way because the existing State Department review was finalized in 2014 and includes outdated information.

And if the Army Corps approves water crossing through a general permit known as Nationwide Permit 12, groups will likely argue that the agency was required to take a closer look at cumulative impacts.

The Nebraska PSC’s decision today will also affect future federal litigation. If state officials approve the alternative route that parallels the original Keystone pipeline, environmentalists could argue that the federal government needs to conduct a new round of review — a supplemental environmental impact statement (SEIS) — to consider the impacts of that route.

"NEPA regulations require that if there are any changes to the project, an agency has to prepare an SEIS, and this would certainly be a change of the project that the State Department hadn’t considered before, so we would push for that," Hayes said.