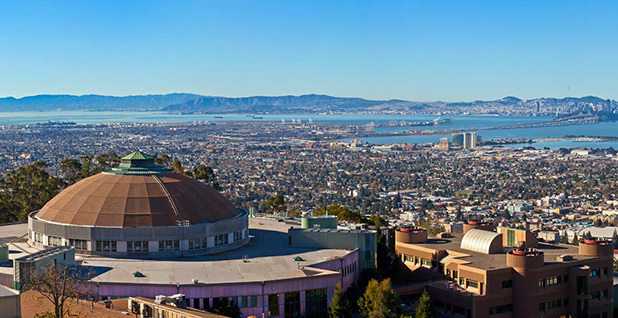 Lawrence Berkeley National Laboratory, situated in the hills above the San Francisco Bay Area, is among the national labs trying new ways to collaborate with their regional economies. Photo courtesy of the University of California, Berkeley.

The U.S. national energy labs, funded by taxpayers to the tune of $12 billion a year, produce too many dead ends and too few transformative clean technologies, some critics say. And they tend to ignore the local entrepreneurs who would love to collaborate.

Now a wave of new thinking seems to be afoot at the Department of Energy, which oversees the labs. A few pilot programs are nudging the labs to get their clean-technology ideas to market by working with regional tech firms.

"There’s been a cultural and programmatic shift within DOE," said Peter Littlewood, the director of Argonne National Laboratory, outside Chicago. He added that commercializing the labs’ intellectual property, known as technology transfer, is moving up the priority list.

Those leading the effort said they are trying to effect a cultural change at the labs, many of which date back to the 1950s and still behave as if they were the secretive bastions of the Cold War.

The labs have been given little incentive to engage with local companies, especially smaller ones, even as technology clusters have grown up near some of them, like Argonne in Chicago, the National Renewable Energy Laboratory (NREL) in Golden, Colo., and the four national labs in the San Francisco Bay Area.

The 17 national labs have diversified well past nuclear weapons and into many areas of inquiry. They now represent about 40 percent of the government’s budget for science and technology research. But the work is often stovepiped into rigid categories that resist the multidisciplinary work that defines 21st-century technology, some observers say.

They do significant collaborations with private industry, earning the labs tens of millions of dollars in licensing fees. But they tend to be with enormous companies and with rigid oversight from the Energy Department. Reaching a research and development agreement with a national lab can take four months and a squad of lawyers, neither of which small, fast-moving tech companies have.

"Let’s remember, the history of the labs is not about regional and economic development. It’s about nukes and cleanup," said Mark Muro, a fellow at the Brookings Institution and co-author of a 2014 report on the state of technology transfer at the labs.

"That’s begun to change," he added. "New personnel, new realities have begun to transform that. The increasing recognition of clean tech and of innovation in general has led them to realize the importance of regions and of local clusters."

Some lab leaders say that in the last 18 months or so, a change in tone has taken place at the national labs under Ernest Moniz, who took over from Steven Chu as secretary of Energy in 2013.

The new approach comes nearly a decade after a directive to improve the labs’ ability to transfer technology was ignored. Last year, DOE’s inspector general found that the department had failed to hire a technology transfer coordinator or find an effective use for $20 million of tech-transfer funds, as had been required under the Energy Policy Act of 2005.

This February, the department established an Office of Technology Transitions, with a staff of eight and an annual budget of $2.1 million. Its first acting director, Jetta Wong, reports directly to Moniz.

The creation of this office is just one of the latest signs of an Energy Department that has, under the Obama administration, put more emphasis on regional growth and entrepreneurship, Muro said.

Those include regional hubs focusing on particular issues, such as an energy storage hub based out of Argonne and a critical-materials hub out of Ames Laboratory in Iowa. Others, such as the Manufacturing Demonstration Facility outside Oak Ridge National Laboratory, have been credited with helping to spur a manufacturing cluster in Tennessee. Last year, the facility led the creation of the first 3-D printed car.

Another initiative is the Advanced Research Projects Agency-Energy (ARPA-E), which has become a leading source of funding for high-risk, high-reward energy technologies. It was created at the end of the George W. Bush administration, but without a budget, and is now funded at an annual budget of $280 million.

Notably, some of the first hires at ARPA-E have now moved into positions at DOE and the labs, where they are the leading advocates for regional economic development.

David Danielson, for example, is a former venture capitalist who became the first program director hired at ARPA-E. He now heads DOE’s Office of Energy Efficiency and Renewable Energy, which provides a large slice of the labs’ funding and directly oversees NREL in Colorado. Under Danielson, it is now spending $20 million a year on a voucher program for small businesses to use lab facilities.

"You can do really great science and engineering, but if you don’t have a relationship or connection to industry, to the actual folks who will get these technologies to market, if they’re not rubbing shoulders closely, the innovation may not be pointed in a relevant direction," Danielson said in an interview.

Other structural changes have taken place at DOE, such as a merging of two wings of the department, responsible for much of the labs’ basic and applied research, into a new undersecretariat for science and energy. With the change, 13 of the 17 national labs are now under the same undersecretary. Such changes seem to be giving lab directors greater autonomy to form local partnerships.

Littlewood, the head of the Argonne lab, said that it used to be a burdensome process to negotiate a deal with a company because of interference by officials at DOE. "A few years ago, all those deals would have died," he said. "Now they get to an undersecretary’s desk and get signed."

One of the most talked-about new ideas at the national labs is a program called Cyclotron Road at the Lawrence Berkeley National Laboratory, in the eastern hills above San Francisco Bay.

Named after the road that connects the lab to the University of California, Berkeley, it is a sort of incubator program meant to "spin-in" marketable ideas to the Berkeley lab, as opposed to the "spin out" represented by the licensing agreements, spinoff companies and published research by which the labs usually spread their knowledge.

Last fall, more than a dozen recent graduates of energy programs at top universities arrived to start work on six risky projects at various sites throughout the lab.

All have been given two years of funding to develop ideas that have the potential to be game-changers in producing low-carbon energy but require a great deal of deep science work and would have probably gone nowhere, given the scarce world of energy venture funding, said Ilan Gur, the program’s director. Gur, like Danielson, was one of the first program directors at ARPA-E.

One example is a project called Opus 12, run by three graduates of Stanford University who met while working together on a project to turn carbon dioxide into fuels and chemicals. It’s a little-understood technology that is orders of magnitude harder — and more important — than many of the software apps that are the rage in Silicon Valley these days.

"Generally, with something like an app, there’s no question as to whether you can build it. It’s more a question of whether people will use it," said Nicholas Flanders, one of the three researchers. "What we’re doing with hard science. There’s both market risk and a lot of technological risk."

A major benefit of working at the lab is access to its expensive and exotic tools. Much of the work at the national labs is centered on these machines, such as the Advanced Photon Source at Argonne, or the SLAC National Accelerator Laboratory, down in Silicon Valley, which uses a linear accelerator to examine the nature of subatomic particles.

To develop a working prototype, the Opus 12 researchers have gotten advice from five of the lab’s world-class researchers and have been able to run tests at fuel-cell testing stations, on an electron microscope, and at the Molecular Foundry to explore the performance of their project at the level of nanoparticles, Flanders said.

In addition to Cyclotron Road, the Berkeley lab is one of several national labs participating in a $20 million program to provide vouchers for private companies to get access to the labs’ brainpower and equipment.

All four of the Bay Area’s national labs — Berkeley, Lawrence Livermore, the Sandia National Laboratories and SLAC — are collectively making their facilities available to 20 to 25 companies in the first year, said Ramamoorthy Ramesh, the Berkeley lab’s director of energy technology.

A $200,000 voucher could get a small business access to equipment as well as the services of a full-time staff member for six to eight months. Over time, the program might build relationships with 100 promising Bay Area tech businesses.

"Hopefully, one of them will turn out to be a Google or a Tesla," Ramesh said.

By tapping the entrepreneurial smarts in the Bay Area, the projects’ leaders hope that they can do something the national labs have never done: act as catalysts for regional hubs of energy innovation.

"That’s the kind of impact that we’re striving toward," Gur said. "We want to see the private sector move mountains to be closer to what we’re doing."