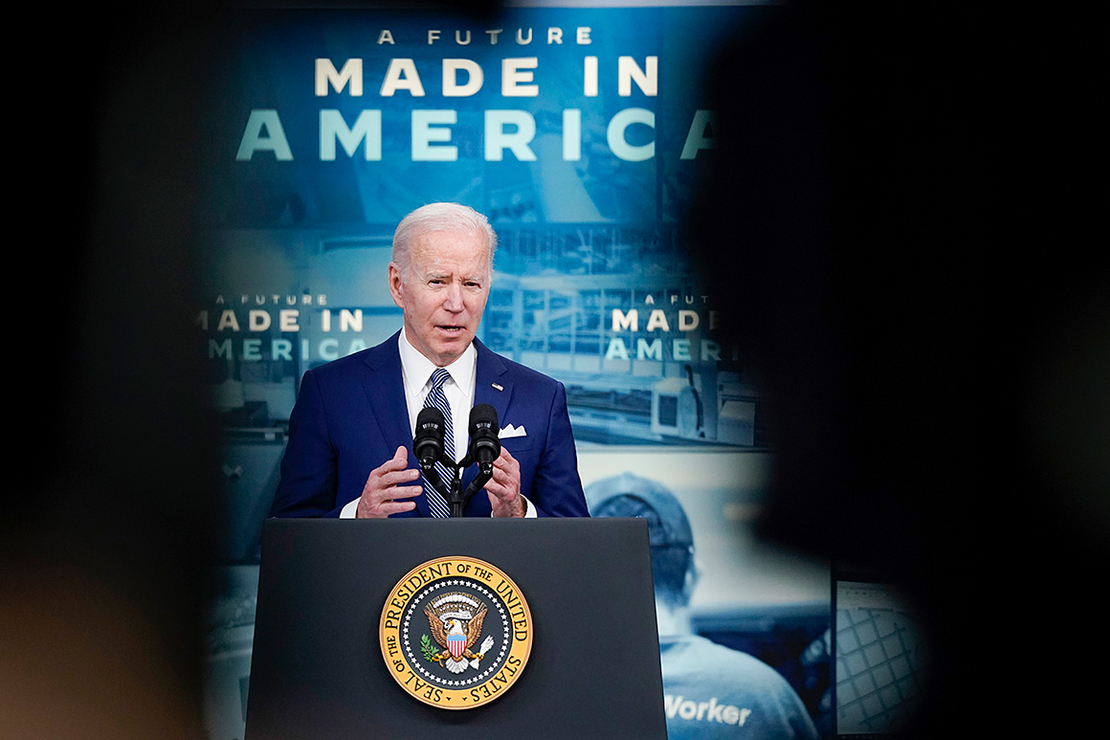 President Biden announced new investments in the production of equipment for electrical infrastructure on Friday. Unlike some members of his party, Biden hasn't pointed to Russia's invasion of Ukraine as a justification for clean energy spending. AP Photo/Patrick Semansky

Republicans are calling for more oil drilling. Europe says it’s doubling down on clean energy. But as the Russian invasion of Ukraine continues into its second week, President Biden has stayed mum about how tectonic shifts in global markets should affect the future of U.S. energy.

Gasoline prices have remained Biden’s consistent focus. He expressed concern about rising costs to motorists last month at the invasion’s opening, and again during his State of the Union address last week. The president’s highest-profile response has been releasing millions of barrels from the Strategic Petroleum Reserve to help soften price hikes at the pump.

But Biden has avoided linking the diplomatic and economic isolation of Russia — one of the world’s top three oil producers — to his goal of decarbonizing the economy, as international allies and some other Democrats have. Nor has Biden heeded calls from industry, Republicans and Sen. Joe Manchin (D-W.Va.) to jump-start domestic drilling to replace Russian oil.

Those responses would not soothe today’s spiking energy prices, experts say, because more drilling or more renewable energy would take months or years to come online.

But some Democrats are beginning to worry they’re losing control of an important narrative — one that encompasses inflation, jobs, national security and other important issues — in the lead-up to an already tough midterm election.

“We can’t let the fossil-fuel industry scare us into a domestic drilling free-for-all that is neither economically warranted nor environmentally sound,” House Natural Resources Chair Raúl Grijalva (D-Ariz.) wrote Friday in a Guardian op-ed.

“The U.S. is the world’s top oil and gas producer. Doubling down on fossil fuels is a false solution that only perpetuates the problems that got us here in the first place,” he wrote, calling for more investments in renewable energy as a way to “cut the lifeline to fossil-fuel despots like Putin.”

Biden has been reluctant to emphasize that argument. He’s continued talking about clean energy in the same terms he did last year — praising bipartisan infrastructure investments that have already passed and urging approval of more clean energy tax credits.

Instead, Biden has argued that electric vehicles and renewable energy are key to U.S. power — against China. By contrast, he has not argued that the United States should decarbonize to marginalize Russia.

Democrats risk missing a chance to reframe clean energy as a security issue, some observers say.

“The crisis has revealed some new economic and geopolitical opportunities that the Democrats, in particular, have yet to capitalize on,” said Paul Bledsoe, a former climate official in the Clinton White House. “But I think they will.”

European leaders have been more direct. European Commission President Ursula von der Leyen said on the eve of Russia’s invasion: “We are doubling down on renewables. This will increase Europe’s strategic independence on energy.”

Britain’s Conservative government has echoed that stance. Kwasi Kwarteng, the U.K.’s business secretary, said the government would boost renewable and nuclear energy as a defense against countries like Russia that are weaponizing the supply of fossil fuels like natural gas.

“The long-term solution is obvious: gas is more expensive than renewable energy, so we need to move away from gas,” Kwarteng wrote on Twitter. “The more cheap, clean power we generate at home, the less exposed we’ll be to global gas markets.”

The Biden administration agrees on the substance of that position. In January, Biden released a joint statement with the European Commission president pledging close cooperation on clean energy as a long-term security strategy.

“The current challenges to European security underscore our commitment to accelerating and carefully managing the transition from fossil fuels to clean energy,” Biden and von der Leyen said in a Jan. 28 statement.

But since Russia’s invasion of Ukraine, the Biden administration has deemphasized that stance in favor of stressing market stability. That’s not a bad thing to some Democrats.

But turning a conversation about Ukrainian sovereignty into one about clean energy, Freed said, might strike people as a “bank shot.”

That “is not the kind of conversation that most Americans have at their dinner tables,” he said.

Into that political vacuum have stepped those who say the best way to ensure stable energy prices is to step up U.S. drilling, which still remains below pre-pandemic production levels.

“We need to have an all-in energy policy,” Manchin said Thursday, adding that he’s been lobbying the administration to increase oil and gas drilling. The United States can boost oil production “overnight,” he added, “if they just let us.”

More clean energy is fine, too, Manchin added, but “the bottom line is the production of fossil fuels right now. I mean, wind and solar is not going to put natural gas over there [in Europe]. We have to be realistic with what we’re trying to do here.”

“They are sending a signal to the marketplace now that the United States’ policy is to be closed for business … for oil and gas. That is unacceptable,” he said. “It’s not what the American people want. It’s not what bipartisan policymakers on Capitol Hill want.”

To push back on those criticisms, the Biden administration has pointed to the industry’s stockpile of oil leases on public lands and highlighted short-term efforts like releasing petroleum reserves.

The long-term response has been where the White House has been more comfortable discussing clean energy.

“What overall we need to do here is reduce our dependence on oil,” White House press secretary Jen Psaki said Friday. “Europeans are doing that; we’re doing that. And I think what we’re all going through now in this discussion of banning oil imports and the volatility in the global markets — oil markets — is a reminder of that.”

On Friday, Biden spoke privately with the president of Finland, another country threatened by Russia, about “energy security and efforts to address climate change,” according to a White House readout.

“Having had conversations with our European colleagues in particular, I think there’s an incredible moment here to really accelerate the clean energy transition,” the official said on a background call with reporters. “It has a climate benefit, it has an affordability benefit and it also has a security benefit.”