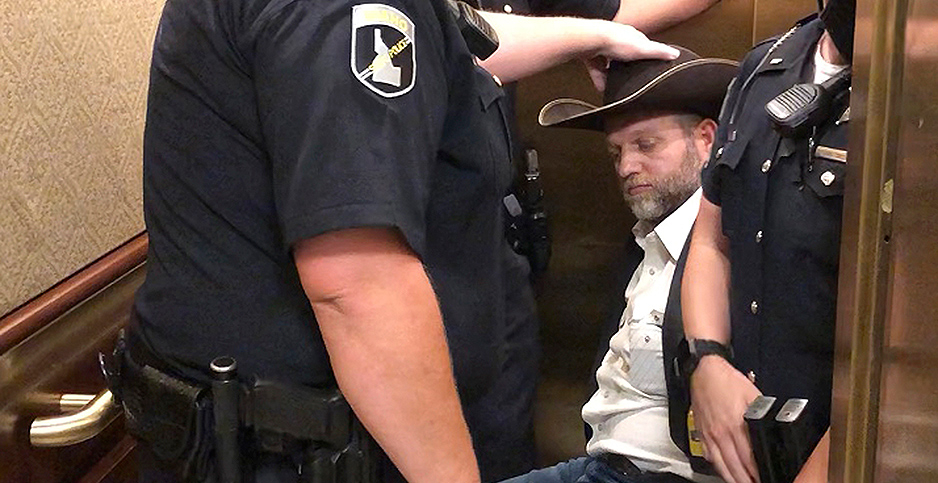 Ammon Bundy being wheeled into an elevator in a chair following his arrest at the Idaho Statehouse in Boise yesterday. AP Photo/Keith Ridler

Idaho State Police arrested Ammon Bundy last night as he led a second day of protests at the state Capitol in Boise — rolling the cowboy hat-wearing anti-government activist out of the building after he was zip-tied to an office chair.

Bundy, who came to national prominence during his previous clashes with federal land managers in Oregon and Nevada, now leads protests of state efforts to curb the COVID-19 pandemic (E&E News PM, April 17).

Police took Bundy at the Capitol following two days of protests amid a special session on coronavirus-related legislation.

According to the Ada County Sheriff’s Office, Bundy was charged with two misdemeanor offenses, including trespassing and resisting or obstructing officers.

The Idaho State Journal reported that Bundy testified before a state House committee earlier in the day, then relocated to an area designated for credentialed media.

"The Idaho people are more than capable of keeping themselves safe," Bundy testified, according to the newspaper. "We the people are tired. We are tired of government force, and we will only take it for so long. I recommend you act wisely, because we will not live in fear."

He was arrested after refusing to leave the building, even though the state House and Senate had adjourned for the day.

"I’m going to sit here and assert the right of the people to keep their government accountable by filming them, by recording them and reporting that back to the people," Bundy told Boise-based CBS affiliate KUTV.

But the group plans to continue its protests at the Capitol today.

Earlier this week, Bundy appeared in online videos at the center of a group forcing its way into the state House gallery, where seating had been restricted in an effort to enforce social distancing.

Bundy spent nearly two years in jail over his previous clashes with federal agents, including an armed occupation of a national wildlife refuge in Oregon and a showdown with the Bureau of Land Management near his father’s ranch in Nevada.

But Bundy has never been convicted of wrongdoing in those incidents. In the Oregon case, a trial acquitted Bundy and other leaders of the 2016 occupation of the Malheur National Wildlife Refuge.

A federal judge declared a mistrial in the Nevada case in 2018 after finding that federal prosecutors had withheld evidence from the defendants. Earlier this month, the 9th U.S. Circuit Court of Appeals rejected the government’s bid for a new trial (Greenwire, Aug. 7).