Ammon Bundy offered to plead guilty to spare other militants 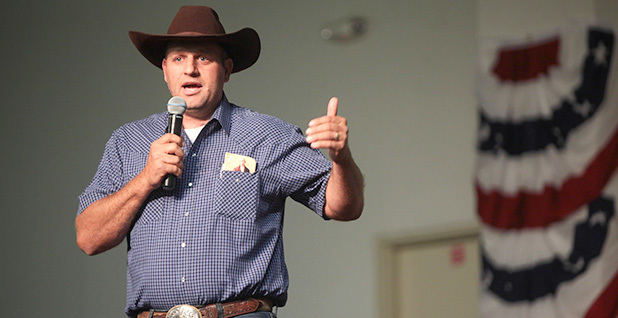 Three days after he was arrested on a remote highway north of the Malheur National Wildlife Refuge in January, Ammon Bundy offered to plead guilty to a felony conspiracy charge for occupying the refuge if the government would drop charges for other defendants and allow the remaining occupants to go home safely.

The plea deal, which prosecutors rejected two weeks later, was revealed yesterday in a legal filing from Bundy’s attorney Mike Arnold in the U.S. District Court for the District of Oregon.

"On January 29, 2016, when more government initiated violence seemed highly probable, Mr. Bundy reached out on his own initiative, through legal counsel, in an attempt to facilitate a speedy resolution, offering to take all responsibility for the protest," Arnold wrote. "This is the kind of leadership and responsibility with which Mr. Bundy has been known throughout his life, and certainly throughout this protest."

The government formally responded Feb. 10 — one day before the remaining four occupants peacefully exited the refuge — stating "it is simply too early to discuss resolution of the case," Arnold wrote in the 24-page filing.

Since then, Malheur occupants including Bundy have been charged with five additional felony charges.

Bundy argued a delay is needed because he was not able to "meaningfully communicate" with his attorney while he was in Nevada from April 13 to 25 to face separate charges for his role in his family’s standoff with the Bureau of Land Management at Bunkerville, Nev., two years ago.

Government attorneys said they’d be OK with a five-day delay.

Judge Anna Brown yesterday agreed to give Bundy until May 9 to file his motion. Bundy plans to argue that the U.S. Constitution does not allow the federal government to own the refuge, and thus the government has no grounds to prosecute him and the other dozens of alleged occupants.

As an alternative to extending his filing deadline — and over the objections of other defendants — Bundy proposed that his case be severed from the rest of the defendants’ so that it can proceed to trial within the next month. A trial is currently set for Sept. 7.

Bundy "was willing to sacrifice his broader interests and risk his liberty for his fellow protesters then, and stands ready now to go to an immediate trial now, as his right to a speedy trial entitles him," Arnold wrote. "In moving forward with this expedited trial, Mr. Bundy further hopes that his acquittal at trial will illustrate and make plain how unjust, inappropriate and misguided it has been for the government to prosecute his fellow protestors with absurdly trumped up charges — for doing only what was within their personal and well-established legal rights as American citizens to do."

Bundy’s filing said it will cost between $400,000 and $1.5 million per court-appointed attorney to defend all who have been charged in the 40-day occupation.

"That means that realistically, the government’s exaggerated, hyperbolic and politically motivated prosecution of peaceful protesters could take about $27,000,000," Arnold wrote. "If the court cannot see fit to accord the defense — even a fraction of the deference and accommodation it has shown to the government — it makes sense to try the leader first, before moving forward with the rest."