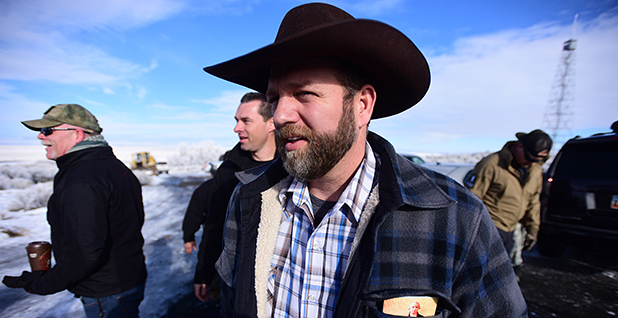 Ammon Bundy arrives to speak to the press during the 2016 standoff at the Malheur National Wildlife Refuge in Oregon. Alex Milan Tracy/Sipa USA/Newscom

Bundy, who came to national attention for his leadership roles in two armed standoffs challenging federal land management, said last night that he has now assembled at least 300 individuals in opposition to business closures and stay-at-home orders aimed at curbing the spread of COVID-19.

"We are going to be like a den of rattlesnakes," Bundy said last night in Emmett, Idaho, where he led a third meeting in as many weeks accusing state officials of violating the Constitution’s Bill of Rights. The meeting was broadcast via Facebook. "Because we will be so venomous if our rights are even threatened one bit … people that would normally trample on rights will simply walk around us" (Greenwire, April 3).

The ad campaign centers on a website, BradLittleisaDisgrace.com, and encourages visitors to share their stories about how the state’s stay-at-home order has affected their families or businesses.

Rodriguez, a onetime political candidate who failed to win the GOP nomination for a state Senate seat in 2014, characterized Little as a "criminal of the highest order" over a state order requiring residents to isolate until April 15. Little is weighing whether to extend the order.

Under Little’s executive order, state residents are required to "limit all non-essential gatherings of any number of individuals" outside their own households.

Rodriguez also repeatedly mocked the seriousness of the novel coronavirus, telling the crowd he had suffered from the virus in January before proceeding to breathe in an exaggerated, open-mouthed manner.

"This is a very mild virus," he said, and later added: "If you’re a pansy and you’re afraid of getting a cough, you stay home. I’m going to work."

Rodriguez said the campaign targeting Little would continue until the governor rescinds the stay-at-home order and also makes a "public apology" to all Idaho residents.

Bundy also said he is looking into a class-action lawsuit targeting Idaho’s state government: "There is a real need to save our businesses in this state."

Bundy, who owns the building where meetings have been held, is also set to host an Easter Sunday religious service followed by a potluck meal.

Despite his dismissive remarks about the seriousness of the novel coronavirus, Rodriguez warned attendees not to attend the Sunday event should they have "symptoms of the flu or a cold."

"I’m not afraid of the coronavirus; you shouldn’t be either," Rodriguez said, asserting that the group would be mocked in the media should any of its members become ill. "The last thing we need is someone coming to these meetings and someone gets coronavirus."