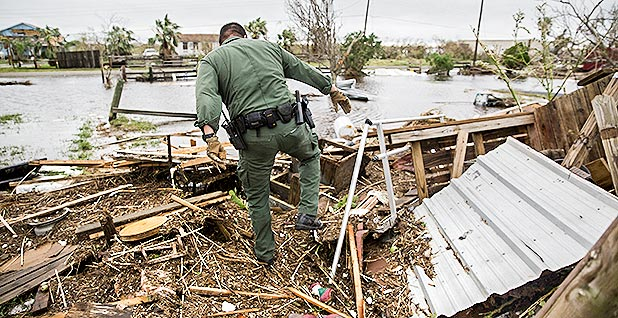 Texas Gov. Greg Abbott has suspended more than a dozen environmental regulations for the Hurricane Harvey cleanup, despite concerns that going without the rules for as long as four months could raise long-term public health risks and breaks with the state’s disaster plans.

Waiving environmental and other rules isn’t unheard of after a natural disaster and is specifically permitted under many federal laws, but the length and breadth of the Republican governor’s regulatory suspension worry some disaster recovery experts.

"The idea behind all of those provisions that allow for waiving various regulations after a disaster is so that we don’t slow down the emergency response phase of our coping with the disaster," said Deserai Crow, an environmental policy professor at the University of Colorado, Denver. "It becomes less justifiable the further past the actual disaster event."

Nearly three months after Harvey slammed southeast Texas as a Category 4 hurricane with record rainfall, Crow said she’s "very concerned" about the ongoing waiver of many debris management regulations and other environmental standards. "It’s quite likely," she said, "that there are numerous communities and counties that no longer need that."

The Texas Commission on Environmental Quality first asked Abbott to suspend dozens of rules on Aug. 28, three days after Harvey made landfall with top sustained winds of 130 mph. The governor quickly granted TCEQ’s request, and then on Sept. 20 extended the waivers for another month and broadened their reach.

While the initial rule suspensions applied to 30 of Texas’ 254 counties, the second added another 30 counties — some of which are more than 100 miles from the Gulf Coast, where Harvey lingered for days, dumping as much as 50 inches of rain.

The waiver extension also opened the door to suspending additional regulations "that would in any way prevent, hinder or delay necessary action in coping with this disaster," it says. All that was needed was "written approval of the Office of the Governor," the proclamation says.

A spokesman for Abbott didn’t respond to emails or calls requesting a list of rules that had been suspended at the request of businesses or other groups.

As a result, more than a third of Texas counties will now go up to four months without many environmental regulations, including ones governing the mountains of building materials, appliances, furniture and vegetation destroyed by the storm.

Florida Gov. Rick Scott (R), whose state was hit by a Category 4 hurricane weeks after Texas, also issued an executive order on Sept. 4 suspending "the effect of any statute, rule, or order that would in any way prevent, hinder or delay any mitigation, response or recovery action necessary to cope with this emergency." But the order didn’t specifically change debris management rules and expired on Oct. 4.

Since then, the Florida Department of Environmental Protection has waived regulations on dredging, procurement and — for just 22 days — power plant fuel sources.

The longer Texas tackles its debris problem without environmental regulations, Crow said, the greater risk its citizens are at of developing cancer or other ailments. Harvey has already claimed at least 88 lives, 26 of which were caused by "unsafe or unhealthy conditions," The Texas Tribune reported last month.

"All environmental laws are about dealing with risk to our environment or human health," she said. "And most of those are kind of long-term, chronic risks. So when you’re dealing with a disaster, it’s a much more immediate, short-term, life and safety type of calculation. So I think it’s really just a calculation of which risks must take precedence right now."

Crow noted that after the terrorist attacks of Sept. 11, 2001, and in the aftermath of Katrina, states decided that the urgent need to remove the toxic debris caused by the disasters was more important than enforcing environmental rules governing such actions.

While that helped New York City and New Orleans recover faster, some recovery workers who labored at the site of the World Trade Center attacks would eventually suffer grave health consequences from toxic dust and other pollutants.

"Those laws are there to protect us from chronic long-term or very immediate exposure problems," Crow said. "By suspending environmental laws longer than is a necessity for emergency response during a disaster, we’re doing our communities a huge disservice."

Disaster debris poses "a health and safety risk to the community unless properly disposed of," says the TCEQ plan, which E&E News obtained through a state open-records request.

The document acknowledged storms like Harvey could pose unique challenges.

"Severe disasters may generate debris in quantities that can overwhelm solid waste management resources and facilities or force communities to use disposal options that would otherwise not be acceptable," it says.

But the options the TCEQ plan listed for debris were temporary staging and separating, recycling, open burning, landfill, incineration, or on-site burial.

Of those options, "outdoor burning is the least desirable method of volume reduction, as there is no control over how much or how quickly it is allowed to burn and lacks any type of environmental control," the 3-year-old document says. "Close monitoring is needed to ensure that only clean woody debris is burned."

Yet at TCEQ’s request, Abbott waived rules that required burns to be overseen by certified and insured managers.

The governor also suspended regulations that limit burns to times "when wind direction and other meteorological conditions are such that smoke and other pollutants will not cause adverse effects" and lifted prohibitions on burning electrical insulation, treated lumber, plastics, rubber, heavy oils, potentially explosive materials, chemical waste, and other construction or demolition products.

TCEQ defended its decision to take drastic measures to respond to Harvey that weren’t considered in the debris document.

"This plan is used as a guideline and information resource for staff, but, like with any plan, is meant to be flexible to adapt to changing situations," spokeswoman Andrea Morrow said in an email.

She also noted TCEQ still requires regulated entities to "prepare and maintain records related to the actions and suspended rules."

But environmentalists question the value of record keeping without rigorous oversight and the threat of enforcement.

Landfill operators, for example, must track the amount and types of debris they’re accepting, "but they don’t have to turn it in to TCEQ," said Andrew Dobbs, the Texas Campaign for the Environment’s Austin program director. "It appears that TCEQ isn’t doing anything to go and check."

Although federal laws remain in effect, Dobbs doubts U.S. EPA under Administrator Scott Pruitt will be aggressive in backstopping TCEQ.

"It’s not like the current EPA is world famous for its commitment to environmental protection," he said.

In a statement to E&E News, EPA emphasized that it is helping TCEQ to address the state’s debris problem, as well as other environmental challenges posed by Harvey.

"Over 250 EPA officials on the ground worked hand in glove with Texas officials to resolve the situation in Texas and will remain until the job is done," a spokesman said.