An abacus for 30×30 acreage? USGS is counting on it 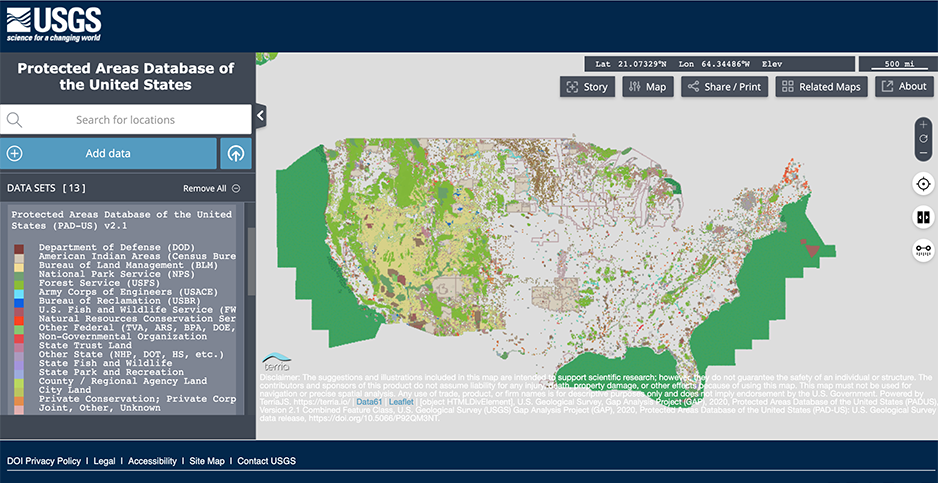 President Biden’s goal of conserving 30% of the nation’s lands and waters within the next decade faces obvious hurdles, but perhaps the most fundamental is this: Exactly which lands should count?

Nearly three months after announcing the pledge, included in a late January executive order addressing climate change, the Biden administration has yet to spell out how it plans to conserve hundreds of millions of acres of land before 2030.

"To summon the ghost of Donald Rumsfeld, there’s a lot of unknown unknowns at this point, and still a lot to sort out," said Brian Yablonski, who serves as CEO of the Montana-based Property and Environment Research Center, a free-market environmental think tank.

"The biggest unknown at this point is what conservation counts towards the 30%," Yablonski said yesterday during an online panel on the conservation program, sponsored by ConservAmerica. "I’m not even sure there’s a consensus on the baseline."

More could become clear soon, as the Interior Department must submit a report by April 27 outlining the steps it needs to take to meet the Biden administration’s "30×30" goals.

But in the meantime, there is an existing resource — a U.S. Geological Survey database that tallies data from more than 30,000 organizations — that could play a key role in how the government ultimately tracks its conservation plans.

Yablonski pointed to USGS statistics routinely cited by Interior Department and the White House that show only 12% of the nation’s lands are permanently protected in a natural state, as are about 23% of its oceans.

Some environmentalists believe "maybe the baseline is a little higher than that," he said. Noting that the current figure would require another 440 million acres of land — an area more than four times the size of California — to reach the 2030 goal.

USGS officials who oversee the Protected Areas Database of the United States, or PAD-US, the source for the 12% figure, agree that the total initial count of what is already protected could indeed be higher.

"Right now, we’re at this 12%, and that’s really accounting for these … lands that we know are very formally protected," said Mike Frame, who serves as the agency’s Core Science Systems associate program coordinator of science analytics and synthesis.

That’s because the database does not currently tally protected acreage on multiple-use lands, such as Bureau of Land Management or Forest Service sites that may be split between extractive industry or timber production and conservation.

Combing the data from those lands — which account for another 18% of the nation’s land mass per the database — could provide a boost to the current baseline.

"As this continues to evolve, we’re going to see more of that and how these multiple-use lands come into play in terms of meeting these goals," Frame said.

The PAD-US database draws its classifications from the agency’s Gap Analysis Project — which examines protections for common plants and animals.

Lands that qualify for the current 12% figure include those in the highest protection classes, known simply as Status 1 and Status 2.

"We always emphasize there’s a difference between protection and conservation," Frame said.

To count within the top tier, lands must be under a management plan that dictates "permanent protection from conversion of natural land cover." That group can include National Park Service units and designated wilderness areas.

But an expansion of the lands that qualify for the 30×30 tally could include those mixed-use sites now classified as Status 3. Those are lands where extractive uses like logging or mining, or activities like off-highway vehicle recreation, are permitted within an area’s boundaries.

A new count could combine stringently protected lands, like wilderness areas, with the conservation acreage found in many mixed-use sites — for example, lands adjacent to a fee area or working forest.

"I do think we’re going to the place where instead of just the classification of the entire unit, there is going to be some subclassification and delineation," Frame said.

But that expansion could require providing assistance to state agencies that provide data for the project, Frame acknowledged.

"If we do start getting into finite data and delineating sub-boundaries, we’ve been pushing there has to be some resources for these state providers," he added. "This data is only as good as what we get."

The PAD-US database came about in 2009. It was created to consolidate data from various sources to allow USGS researchers to track the status of lands — whether federal, state or even easements on private acreage — across the nation.

"This grew out of our research needs," Frame said. "We didn’t have these comprehensive, integrated boundaries of where are the lands, who owns them, what’s the status of them, all of these attributes that we needed to know for the research."

"It’s a database with boundaries, but the attributes are what are really important," Wiltermuth said, noting that the database is used by a wide range of organizations, like the National Wildfire Coordinating Group and state wildlife agencies, and even the U.S. Census Bureau.

Although the Interior Department has yet to determine if it will rely solely on the PAD-US database in its calculations, Wiltermuth noted that the program is prepared to become a tracking mechanism if needed.

"There are a lot of opportunities to build on this model, and I think that’s where bringing the data together and being an authoritative aggregate inventory and facilitating the use of these data from a single data source is a really good model," he said.

Wiltermuth continued: "There’s a lot about 30×30 that goes beyond just tracking what lands are identified as conservation. It’s more toward the underlying goals of conservation: climate mitigation and increasing access to nature. I think PAD-US has built that foundation, and there’s a lot of research and application of that data that will really help to move us forward."

What is considered conservation?

Getting straight what land will be included to meet the 30×30 goal has already become part of the political debate.

In an April 14 letter to Interior Secretary Deb Haaland, the panel’s GOP members described the conservation effort as "vague and undefined" following a meeting with agency staff.

"For example, the Administration had not yet determined how ‘conservation’ will be defined in the initiative," wrote Arkansas Rep. Bruce Westerman, the panel’s top Republican.

The letter goes on to quote from a March 30 "engagement session" that included White House Council on Environmental Quality chief of staff Matt Lee-Ashley.

"I think this gets to the question of how you measure and define what conservation means, which is going to be a challenging thing," Lee-Ashley reportedly told the lawmakers. That "comes back to how we collectively want to define as conserve and what should count towards the 30% goal."

Many conservationists have put forward a number of ideas about what should end up being included in 30×30, from private land that is protected in some way to city parks.

But Republican-leaning advocates for conservation this week put forth another option for the Biden administration to consider: quality over quantity of lands.

"The effort must be grounded in sound science," the letter states, calling for a focus on species and critical habitat.

"We’re focused on the metric of acres conserved," Yablonski echoed at yesterday’s online forum. He pointed to estuaries and wetlands in the coastal plains of the southeastern United States: "That might not get you the big acreage — a lot of that is developed already — but in those undeveloped areas, if you find ways to protect them, it might get you a higher ecological value: 1,000 acres there versus 10,000 acres somewhere in the arid West. There’s a qualitative element to this."