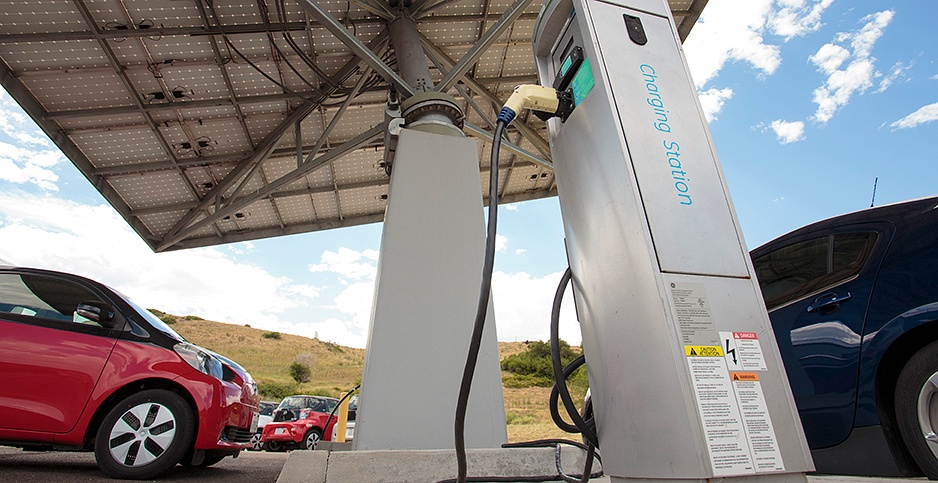 Electric vehicles being charged below a solar canopy. DOE

Washington state could electrify almost all of its 56,000 public vehicles by 2035, according to a new study that might have lessons for the incoming Biden administration.

The analysis found that some vehicles are already affordable for governments or soon will be, like buses, light sedans and garbage trucks. Other types, like heavy pickup trucks, could take a lot longer to fit into state and local budgets, based on the study led by the Atlas Public Policy research group.

"The case for cost effectively electrifying nearly all public vehicle procurements in Washington state looks very favorable over the timeline extending through 2035," the report said.

Such numbers could be relevant to President-elect Joe Biden, who has suggested lowering carbon emissions by requiring federal agencies to buy electric for the government’s vast fleet of 221,000 vehicles, including those owned by the military.

"It provides the federal government a road map for what can be electrified first," said Charles Satterfield, a project manager at Atlas.

The report was commissioned by Washington state’s Joint Transportation Committee, which is made up of the chairs and ranking members of the state’s House and Senate transportation committees. Besides Atlas, researchers came from the National Renewable Energy Laboratory and Washington State University.

Electric versions of government vehicles still have higher sticker prices than today’s gas and diesel vehicles, but may be less expensive to operate over their lifetimes because of cheaper fuel and lower need for maintenance. The combination of purchase price and running costs is often called the total cost of ownership.

By 2035, more than half of the vehicles studied will be within striking distance of the total cost of ownership of internal-combustion versions and could save $800 million, the report said.

The Atlas researchers looked not just at one type of vehicle or one government arm. Instead, they surveyed all types of vehicles used by many levels of government, from state agencies, to county and city governments, to transit agencies and school districts.

The $382,000 study made sense to do because the government can be a model for EV adoption, said state Rep. Jake Fey (D), the chair of the House Transportation Committee.

"It seemed like a logical thing to do because if we can’t get state government to all-electric vehicles, then it’s going to be hard to convince other people," said Fey.

Until last year, Fey was also the director of the energy program at WSU, which was involved in the study.

The Washington Legislature doesn’t have before it a bill to act on the study’s conclusions. However, lawmakers may consider a new version of a failed proposal from last year that would have banned sales of internal-combustion engine vehicles by 2030 (Energywire, Feb. 14).

The state government has fallen behind on a 2018 commitment to make 50% of its vehicle purchases electric by the end of 2021. The report pointed out that 3% of state vehicles are electric.

Washington Democratic Gov. Jay Inslee, a climate hawk whose name is often mentioned for a potential role in the new Biden administration, is reviewing the study, said his spokesman, Mike Faulk.

"The bottom line is the governor has been a leader in the conversion of state fleets and will continue to do so in order to meet our climate goals," Faulk said.

The Obama administration took measures to advance electric vehicles, but Biden will have much more ability to add them to the federal fleet. Since Obama left office in 2017, battery prices have plunged, driving range has improved and a lot more vehicles — and more types of vehicles — are coming to market.

Civilian agencies have 146,000 light-duty passenger vehicles, from subcompacts to medium-size vans, according to data from the General Services Administration. Dozens of new models from major automakers will arrive in showrooms in the next four years.

The Washington state study found that almost all light-duty vehicles — 97% — could be electrified by 2025 and the state could save money doing so.

The report found that some larger vehicles that rack up lots of road miles will soon be cost effective to electrify, including shuttle buses, full-size buses and garbage trucks.

"Transit bus electrification is one of the best beachheads for states and public fleets to consider early on as a first marketplace for ZEVs [zero-emission vehicles]," said Kyle Winslow, federal policy director at the clean-transportation advocacy group Calstart, who reviewed the Washington study but was not involved in it. "It follows that later ZEV applications like shuttle buses; cargo vans; and regional-haul, delivery-sized trucks owned by local or city fleets would be next in line."

Such vehicles are more commonly owned and operated by local governments than federal agencies. But their purchases could be accelerated through federal transportation funding under the Biden administration, said Atlas founder Nick Nigro.

One of the hardest areas is the heavier end of pickups, like the Ford F-250 and -350. "There just aren’t any options at the moment," Atlas’ Satterfield said.