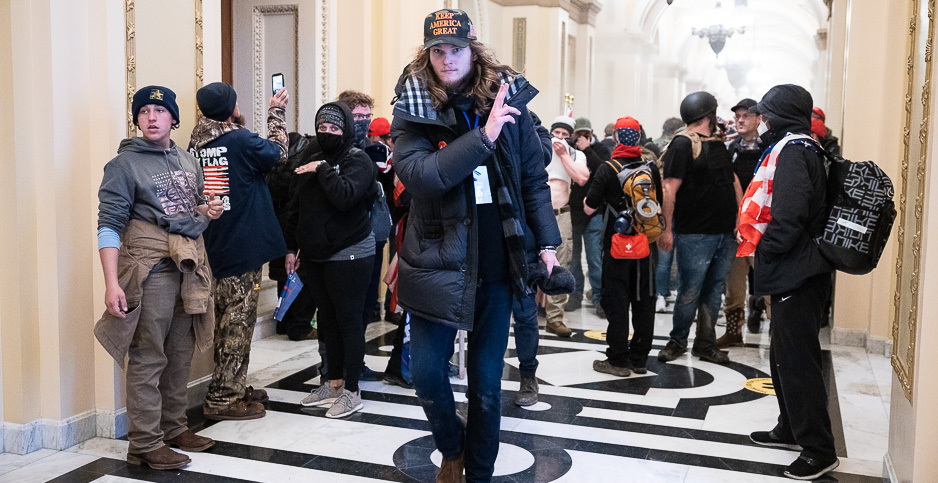 "We should not have both come in today," my wife texted me from the House gallery on Wednesday afternoon.

Both of us are reporters who were in the Capitol to cover the certification of the Electoral College vote. We were also looking to interview lawmakers about surprise Democratic victories in Georgia, which will shift control of the Senate.

Instead, we spent most of the afternoon locked down and frightened as angry rioters stormed one of the nation’s most famous buildings — forcing lawmakers, staffers and press to evacuate.

President Trump egged on the crowd during a speech near the White House earlier Wednesday, urging it to march on the Capitol. The chaos that followed will leave an indelible stain on his presidency and may also get him barred from trying again for a second term.

Arriving at the Capitol on Wednesday morning, I’d waded through a crowd of Trump supporters milling around, eager to protest the vote.

They seemed more a health threat than a security concern, decked out in their red MAGA gear. Only a few were wearing masks amid the pandemic.

But I was wrong, and a busy day at the Capitol — my workplace — soon turned dangerous.

"Stay away from outward-facing windows and doors," an antiquated intercom system crackled in the Senate Press Gallery around 2 p.m.

The Capitol Police were being overly cautious in response to the protesters, I figured. I ducked into a third-floor men’s room that has perhaps the best view of the building’s East Front from a massive oval window. A photojournalist was already there.

Looking out, I was stunned as the crowd of protesters had grown exponentially. They had turned into a furious sea of thousands — waving pro-Trump flags, screaming "Stop the steal," and climbing over one another up marble steps and around massive columns trying to break into the building.

Quickly, their shouts grew more raucous. There was pounding on doors and windows and the sound of glass shattering on marble floor.

I ran down the hallway to a balcony overlooking the front door, only steps from the famed rotunda. The Trump flagpoles had become weapons to poke through the door’s windows in an effort to pry them open.

Capitol Police were nowhere to be seen. Unbeknownst to me, as rioters were breaking in the Capitol’s front door, officers were dealing with mobs already threatening the Senate and House chambers.

By 2:30 p.m., I was locked down with about a dozen reporters, photojournalists and congressional aides in the House Periodical Press Gallery — a cramped, windowless room in the middle of the Capitol.

We locked the door and barricaded it with a chair, wondering whether we should push a copy machine against it too.

One of the staffers grabbed a fire extinguisher from the wall as a makeshift weapon in case any demonstrators tried to enter.

We could hear the rioters yelling as they moved through the Capitol and occasionally pounded on our door. We worried the "press only" sign would invite attention.

Escape strategies were contemplated and quickly scrapped. We had no clear idea of what was going on in the building.

At one point, we peeked out the gallery’s back door and could see rowdy looters taking selfies as they streamed through the Capitol’s Statuary Hall.

But mostly, we were glued to our phones and gallery TVs trying to make sense of the chaos we could only hear.

"Shots fired in the House chamber," one reporter yelled around 2:45 p.m., scrolling through Twitter. The report later proved to be false.

I fired off a text to my wife, who works for the Associated Press, hoping she had escaped the House chamber, where she was watching the proceedings. I also called her.

She answered in a hushed voice, saying she was crouching in the balcony overlooking the chamber. She was locked down too and hoping to be evacuated soon.

We agreed it was probably not a good idea to be talking; I swallowed hard as we hung up. Ten minutes later, she called back to say she had been evacuated. The most harrowing part of the day was over for me.

But another hour of nervous waiting went by. We could smell residue of gas fired in the nearby rotunda and heard reports the National Guard was being deployed. We wondered whether it or the Capitol Police even knew we were stranded.

Thankfully, my elementary school-aged children were at home doing virtual learning with my mother-in-law, oblivious to the day’s developments.

My older college-aged daughter had seen the news; she texted to check on us and I said we were safe.

I never felt in imminent danger during the lockdown, but I felt the same unsettled feeling about my safety as I had nearly two decades ago covering wars in Iraq and Afghanistan. I was trapped in the fog of war in our nation’s Capitol, not sure what would come next.

"Grab your bags," someone yelled around 4:15 p.m. It turned out we had not been forgotten.

Minutes later, Capitol Police and other federal law enforcement agents, brandishing large rifles, led us out of the building through tunnels to a cafeteria in a nearby House office building, where I was reunited with my wife and other reporters.

By 8 p.m., lawmakers reconvened to continue the process of certifying the winner of the presidential election: Democrat Joe Biden.

The rioters — some of whom carved "murder the media" into a door — had been chased away. But reporters didn’t leave.

Instead, the press gallery was full as journalists finished covering the proceedings. Many filed stories about Congress finalizing Trump’s loss after midnight.

On the House Press Gallery wall hangs a photo of Trump’s 2016 inaugural. It was a similarly gray, winter day.

I covered that swearing-in and sometimes look at the photo and play a "Where’s Waldo?" game of trying to spot myself in the press areas.

When I looked at that picture last week, it took on new meaning. I recalled Trump’s tough talk that day and thought about how the "American carnage" he vowed to end had instead made it into one of the nation’s most sacred institutions.

Early Thursday morning, my wife and I finally headed out of the Capitol, stopping to gaze up in the magnificent rotunda, which by then was already cleaned up.

Outside, the building’s white marble edifice still blazed in all its glory, and the Statue of Freedom remained atop its dome.