An electrical substation to delight the senses 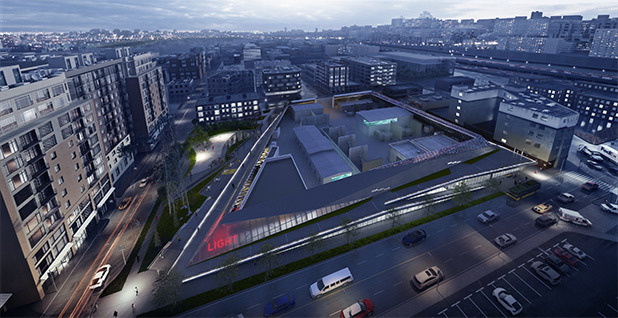 An aerial rendering of Seattle's new substation, which breaks ground this year and is scheduled to come online in 2018. It is envisioned as a new city landmark in a neighborhood that is home to Amazon.com and other high-profile tenants. Image courtesy of NBBJ, rendering produced by MOTYW.

SEATTLE — There’s a matter upon which power companies and the public agree: No one wants to live near an electrical substation. They are ugly places, full of gray boxes and crisscrossed with wires, and an unwary visitor could cause a blackout while also getting killed.

But Seattle, faced with the necessity of building a giant substation in the middle of its booming South Lake Union neighborhood, is taking a different tack: Make it a hip multimedia playground that everybody can’t wait to visit.

If Seattle City Light’s $209 million Denny Substation is completed as planned in two years, the food trucks will be near a new dog park. Passersby heading to a class at the community center can admire the 110-foot-tall piece of public art called Transforest, which looks like what might happen if an electrical transmission tower mated with a local Douglas fir.

All the dangerous, industrial stuff will be cloaked behind a gleaming, three-story-tall structure that the architect calls the "screenwall." Roughly a trapezoid in shape, and measuring exactly a quarter-mile at the periphery for the pleasure of the joggers, it will have embedded within it the community center and an educational space called the "Energy Inspiration Center."

It’s open-topped, so residents of the surrounding apartment high-rises will gaze down at critical infrastructure, such as transformers and reactors. Other parts will be housed in buildings. (Necessary security provisions have been made, officials say.)

For the pedestrians with their umbrellas, there will be educational kiosks with viewing portholes, so they can learn about how hydropower turns into lighting in this damp corner of the country.

In the past, utilities have responded to the need to conceal substations by burying them, such as under the World Trade Center in New York City. Others have dressed them up to look like something else, such as a tract home or a barn.

Seattle’s electric utility, Seattle City Light, arrived at this new approach to electrical infrastructure partly by intent and partly by accident. It sought "a celebration of the functionality," said substation program manager Michael Clark, to "make it an environment that people would actually want to go to."

"If you look at some existing mindsets in the utility business," he added, "that’s the exact opposite of what we do."

For existing mindsets in the utility business, the substation might be just another reason to envy Seattle City Light, which is one of the country’s largest city-owned power companies. Its tag line — "The Nation’s Greenest Utility" — derives from its carbon-neutral status, which comes in most part from the region’s giant hydropower dams.

Only time will tell whether the Denny Substation signals a trend toward classy, accessible electrical substations, or whether it all can be chalked up to Seattle’s quirky circumstances.

The South Lake Union neighborhood, downtown’s northern flank, had been a warehouse district for decades. In 2003, the city reclassified it as a high-tech and biotech corridor. This zone would need more electricity, so Seattle City Light began planning for what would become its first new substation in 30 years — a giant 300- to 400-megawatt facility that would step the voltage down from transmission lines for distribution to a dense high-rise neighborhood.

No one expected quite how thoroughly South Lake Union would transform.

Today it is one of the hottest construction zones in the country, with yellow cranes and the sparkle of welding torches lighting up the cloudy skies. Nearby are the headquarters of the Bill & Melinda Gates Foundation, some of the region’s foremost medical labs, and most importantly the headquarters of Amazon, the e-commerce giant, which aims to occupy about 10 million square feet, nearly a quarter of the city’s Class A office space.

By 2006, Seattle City Light had bought a parcel for its substation on Denny Way, one of the city’s main thoroughfares, and at the junction of three key neighborhoods: downtown, South Lake Union and Capitol Hill. Clark, the substation manager, said the company knew it couldn’t place an ugly electrical substation in the heart of the city.

For architectural design, Seattle City Light chose NBBJ, a global architecture firm known for building skyscrapers, hospitals and sports stadiums. NBBJ had a special incentive: Its world headquarters is right next to the building site.

"We thought, what an opportunity, heavy infrastructure near downtown Seattle," said Carl Tully, a principal at NBBJ who headed up the project. "It needed to be something other than a cloaked, mundane substation."

One other crucial fact came to bear. Construction would erase one block of a city street, Pontius Avenue, from the city’s maps forever. Such a disruption in the urban fabric triggered the involvement of the city’s Design Commission, a panel of urban planners and architects. In return for losing a city block, the project would have to provide some public amenities.

Undergirding this substation’s plan, both Clark and Tully said, was a subtle but inescapable aspect of life here, known as "the Seattle process" — an extraordinarily slow and deliberative way of arriving at decisions, sometimes described as "seeking consensus through exhaustion."

Now, a decade and dozens of community meetings later, the utility, architect and commission seem a bit surprised that they arrived at a plan that everyone actually likes.

"The design team was very thoughtful and worked with us very hard," said Shannon Loew, the chairman of the Design Commission.

In 2014, the project was to cost $173 million and break ground in 2015. Now the cost is $209 million and is due to start next month. Of that, $10 million is for the public amenities, Clark said, and the majority of the expense is for equipment and extensive underground work. All costs will be borne by Seattle City Light customers.

A model of the Denny Substation has been exhibited at the Seattle Architecture Foundation, and it is most likely the first substation in America to have its own logo, Twitter account and Facebook page. Fast Company magazine called it the "world’s coolest electrical substation."

Tully, the architect, calls it "the project of a career."

Visitors to the substation will climb and descend a series of ramps. One corner will be flanked by an installation called "Switchwall" by artist Ned Kahn — a carpeting of LED lights that will toggle between blue and orange with every gust of wind. And instead of the grinding buzz of electrical equipment, pedestrians will be soothed by speakers broadcasting sounds to evoke the power sources of the Pacific Northwest, like babbling brooks and rain.