An end to ‘oil and gas’? Industry rebrands in climate push 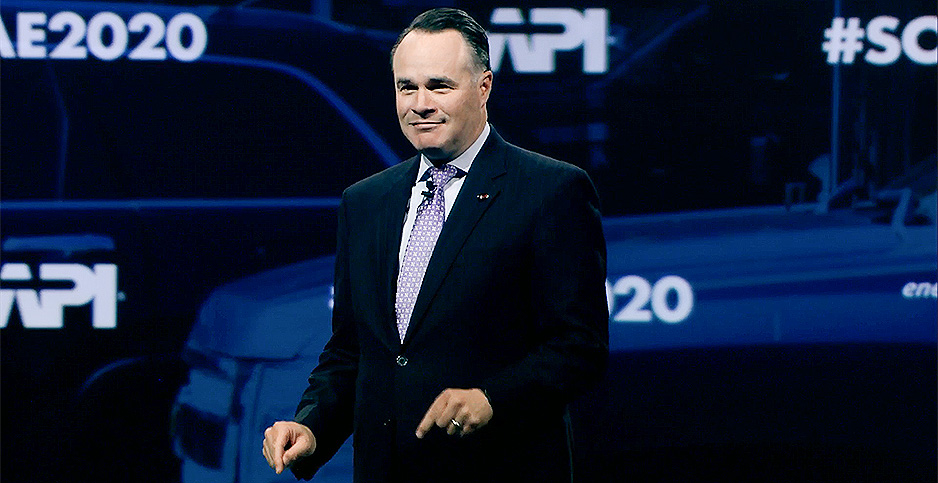 Amid an all-out push to paint itself as a climate change champion, the nation’s main oil lobby appears to be undertaking a subtle shift in how it brands its industry.

"Oil and gas," the long-standing terminology used by industry, finance, government and others, is out. Instead, the American Petroleum Institute has largely switched to "natural gas and oil," putting the low-carbon fuel front and center.

It’s unclear when the change began or even how official it is, though API and its staff have been using the phrase for months. But it was clear at API’s "State of American Energy" event, a massive annual gathering the organization held with hundreds of allies at a shiny new music venue on Washington’s waterfront, that "natural gas and oil" is in.

"The global benefits of American natural gas and oil on the international stage are compelling," API President Mike Sommers said in his speech at the event yesterday.

"Natural gas and oil help explain why, in parts of America that haven’t seen job growth for decades, you’ll now find a vibrant manufacturing base, people moving in, Main Streets busy again," he said later. Again: "Bold and achievable action on climate change at the global level is essential, and America’s natural gas and oil industry is committed to innovation and leadership to make these ambitions more than just hopes and dreams."

API’s materials surrounding the event and its website largely put gas first, too, as do a series of video advertisements it rolled out yesterday on climate change and the impact of the industry on key election swing states (Greenwire, Jan. 7).

"The innovators in America’s natural gas and oil companies have teamed up with the country’s brightest minds and reduced carbon emission levels to the lowest in a generation," a voice-over in one ad said.

Asked about the terminology, Sommers downplayed any difference.

"Sometimes, we use ‘gas and oil’; sometimes, we use ‘oil and gas.’ There’s no definitive moment when we’re using one or the other. I think we use them interchangeably," he told reporters after his speech.

"I think I used ‘gas and oil’ in my remarks, but we’ve also used ‘oil and gas’ today. So I don’t think there’s one way or another that we’re using more."

Gas results in about half the carbon dioxide emissions of coal and much lower levels of other pollutants. Oil has a far dirtier reputation.

Gas has been touted as a clean fuel, especially in contrast to coal and oil, and it’s a label its supporters still embrace. Mainstream Democrats and even environmentalists have promoted gas as a path toward a cleaner environment and climate, although concerns over hydraulic fracturing and methane emissions have overshadowed the cleanliness message in many corners.

In some ways, gas deserves the accolades. The Rhodium Group reported yesterday that the United States’ greenhouse gas emissions likely fell 2.1% in 2019, "almost entirely" due to an 18% drop in coal-fired power generation — which was made possible in large part by competition from cheap gas (Climatewire, Jan. 7).

He attributed it both to a desire to boast about gas replacing more-polluting coal as an electricity fuel and to other ways gas is growing in importance, like the booming production over the last decade connected to fracking and horizontal drilling.

"It’s taken a front-and-center role. I don’t think it’s a big surprise at all," he said. "Natural gas is a big and important industry; it’s driving a lot of our environmental change; it’s driving a lot of the emissions reductions we have. And I think that it’s obvious why it’s that front and center and prominent."

Natural gas producers used to have their own lobbying group, America’s Natural Gas Alliance, but it was folded into API in 2015. API now represents companies across the entire field for both fuels, but other organizations focus more squarely on small producers, gas utilities, pipeline companies and others.

The shift comes at a time when oil and natural gas — or natural gas and oil — producers are under increasing pressure and scrutiny over climate change. Nearly all of the Democrats running for president favor policies that would dramatically hurt the industry, like banning fracking, closing public land to drilling and putting the United States on a path toward net-zero greenhouse gas emissions.

But it’s a trying time for gas specifically. Researchers continue to find that methane emissions and gas flaring from the industry are higher than many previous estimates, putting the climate benefits of gas on shaky ground (Climatewire, Aug. 15, 2019). Methane, gas’s main component, is a greenhouse gas far more potent than carbon dioxide.

Barry Rabe, an environmental policy professor at the University of Michigan, said it’s not a great time to call attention to the gas industry’s climate record, particularly when API is one of the most powerful forces lobbying against efforts to cut methane emissions.

"This is not a moment when the gas side of the ledger is looking particularly good, and API is in the middle of that," Rabe said.

He said it is notable how much gas has displaced coal, but with methane, it’s far from clear that’s a positive.

"It is an extraordinary story, the amount of the electricity sector that comes from gas now, compared to five or 15 years ago. But most of that was predicated under the assumption that methane was extremely low," Rabe added.

Kelly Martin, director of the Sierra Club’s Beyond Dirty Fuels campaign, criticized what she sees as an attempt to clean up the industry’s image.

"This embarrassing attempt at rebranding doesn’t change anything about the dirty fossil fuels API is pushing," she said. "No matter what order they say them, oil and gas are both deadly, both dangerous, and both pose a grave threat to our communities, public health and the climate."