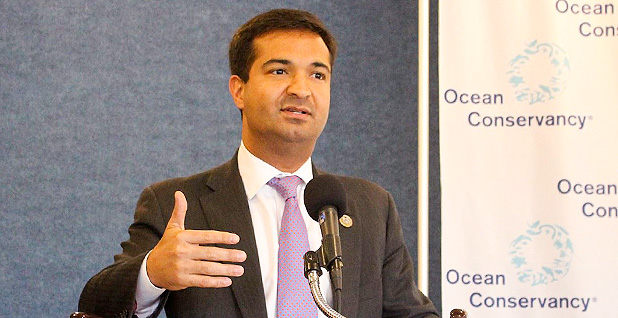 The scene in the Speaker’s Lobby would have made any other House Republican uncomfortable.

Curbelo talks about climate change as inevitable. There’s no ambiguity about the cause of warming, though he would rather talk about fixes than doom-and-gloom models. "I think we turn some people off when we say, ‘Hey, you know, in five years the country is going to be underwater,’" he said.

The impromptu climate news conference that day helped Curbelo deflect tougher questions on his party’s plans for health care. Curbelo would answer, but first he asked for more questions on climate.

"Yeah, there’s no taboo terms when it comes to this issue," the congressman answered with a smile. "We just want to be honest and focus on the science and the facts."

Democrats fixated on turning Curbelo’s district blue in 2018 started attacking him early this year. Those efforts have intensified since Curbelo cast a vote that helped the House pass the "American Health Care Act" earlier this month.

Lewis is a self-identified Democrat who voted for Curbelo when she lived in his district. Lewis said in an interview last week that she was quite impressed with Curbelo’s understanding of the science, seriousness and urgency of the issue.

The Environmental Defense Fund’s advocacy arm, EDF Action, endorsed Curbelo and launched an ad campaign on behalf of the GOP’s most vocal climate warrior. Its 30-second spot, "Beautiful," dubbed Curbelo "a Republican seeking solutions, not excuses, for what matters most."

Curbelo displays a photo from that October fundraiser in his office. There’s also a snapshot of Majority Leader Kevin McCarthy (R-Calif.) posing with Curbelo’s two young daughters on the House floor.

‘Kicking me in the can’

In 2016, Curbelo and fellow South Florida Rep. Ted Deutch (D) founded the Climate Solutions Caucus with the goal of putting partisanship aside and advancing policies that make economic and environmental sense for their districts. They adopted a "Noah’s Ark" strategy for building membership, in which each new member must join with a lawmaker from the other side of the aisle.

Two dozen members of the House GOP have shown interest in climate this Congress, either by co-sponsoring a resolution that acknowledges the problem and calls for action or by joining the caucus. But most Republicans in Washington aren’t feeling the pressure from back home to take action.

Curbelo asserted a "moral responsibility" for his leadership on climate. Politically, there’s a greater awareness about climate and environmental issues in his district, an area highly vulnerable to sea-level rise, he acknowledged, "but it’s still not the top issue for most people."

"If I wasn’t as engaged as I am, I don’t know that politically it would make much of a difference," Curbelo said. "But I do know it’s the right thing to do — not just for my district, for the country and the planet."

Curbelo’s photo collection includes a snapshot of Pope Francis making his way down the center aisle of the House chamber in 2015 to deliver his address to a joint session of Congress. There’s also a Bible on his bookshelf. As a practicing Catholic, "protecting God’s greatest gift to humanity is significant to me," Curbelo said.

‘More of a religion’

Florida’s 26th District encompasses Key West and portions of Everglades National Park, the network of wetlands and forests that is home to dozens of threatened or protected species, including the American crocodile, piping plover, green turtle and Florida panther.

"Even among the most conservative members in the Florida delegation, because of the Everglades and how important it is to our state and our way of life in Florida, there’s an environmental conscience," Curbelo said. He thinks the park’s "sacrosanct" status with Florida politicians could one day help him convert Rep. Mario Diaz-Balart, the GOP congressman who represents the neighboring 25th District.

Diaz-Balart was at Curbelo’s side on the night he flipped the South Florida seat for the Republican Party, ousting Garcia in the 2014 midterm election dominated by the GOP.

"Look, I’ve known Carlos since he was 15, so he and I are friends, and I trust him," Diaz-Balart said in an interview, praising Curbelo as "a humble, brilliant, hardworking guy."

"It’s more of a religion … on both sides of the issue," Mario Diaz-Balart said when asked about global warming. Past climate legislation would have been hugely costly to businesses and people in his district, he said, with only a minuscule impact on halting temperature rise. "I don’t play that game," he said. "My issue is, ‘All right, what is the problem that you’re trying to solve?’ and ‘Does it solve it?’"

Karina Castillo, Latino outreach organizer at Moms Clean Air Force and a resident of Curbelo’s district, described him as "very soft-spoken" and solutions-oriented in his approach.

Castillo, who earned two meteorology degrees at the University of Miami, met him after being invited to join his climate change advisory committee. She wrote the congressman’s office in 2015 to thank him for his leadership and offer local expertise.

"He talks about it as a very matter-of-fact thing, not talking about whether it’s happening or not, but solutions. And how it is really impacting our community," Castillo said in an interview.

Progressive Democrats aren’t counting on climate-savvy Republicans to lend muscle for the heavy lift of fighting global warming in the era of President Trump (E&E Daily, March 31). For the most part, they see GOP leaders willing to repeal Obama-era climate regulations without acknowledging the need for a replacement.

"Look, this is a unique White House," he said. "This is not a White House committed to either Republican or Democratic party orthodoxy, which is encouraging, in my opinion, because it means that a lot of people in the administration are more likely to be open-minded and just consider a broad diversity of ideas and put those before the president. That’s good news."

"Once you join the caucus, you are at least willing to recognize that this issue is important to you, and that you’re going to consider it when you use your voting card," he said.

Curbelo announced during his 2016 campaign that he would not vote for Trump. Last week, in the wake of Trump’s firing of FBI Director James Comey, Curbelo was quick to call for an independent probe of Russian meddling in the elections.