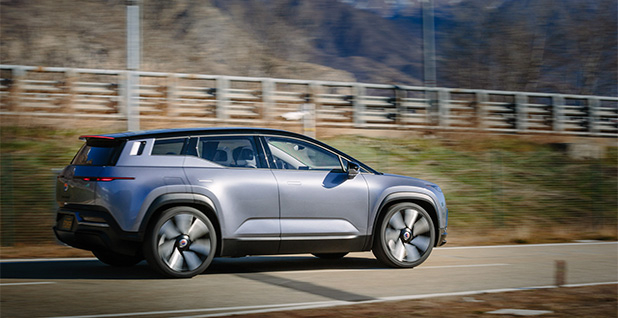 Startup electric vehicle companies won funding in the last week in a surge of investor interest. Pictured is the Ocean, an SUV that Fisker Inc. is promising in 2022. Fisker Inc./Facebook

Electric vehicle makers with names like Fisker, Karma and Rivian got jolts of new investment last week, at a time when Tesla’s rampaging stock price has made the sector unexpectedly hot.

Fisker Inc., a California-based company, garnered $50 million in funding and is rumored to be heading toward a public stock offering. Karma Automotive, also headquartered in California but owned by a Chinese firm, has secured $100 million and is looking for a lot more.

Dwarfing either of them was Rivian, which plans to produce its first e-trucks and e-SUVs from a factory in Illinois early next year. On Friday, it announced a whopping $2.5 billion of new dollars.

Analysts said the level of these investments — especially in the relatively untested Karma and Fisker — smacks of a hype cycle.

"The EV uprising is real, but the scale of investment into what I would view as fledgling companies is staggering," said Ram Chandrasekaran, a transportation analyst at consultancy Wood Mackenzie.

In other EV news, General Motors Co. said it would switch a second factory over to manufacturing of mostly EVs, in a further sign that America’s largest automaker is planning to ramp up electric vehicle production.

The news came as GM said it would retire the gasoline-powered Chevrolet Sonic, one of its last small vehicles, which has become a weak seller amid strong customer preference for SUVs.

The factory where the Sonic was made, the Orion Assembly plant in suburban Detroit, has also been where GM has made the Chevy Bolt, its current electric offering. Now the plant will be given over entirely to EV production with the possibility of internal-combustion models if customer demand calls for it. Cars to be produced at Orion include a refreshed version of the Chevy Bolt, and a new, larger model called the Bolt EUV ("electric utility vehicle"), said Megan Soule, a GM spokeswoman.

The Orion factory joins the Detroit-Hamtramck Assembly plant, which GM said in January would become an all-electric factory. That plant will make the new electric Hummer and the Cruise Origin, a self-driving electric shuttle vehicle.

Analysts mentioned two trends that could lie behind this money cascade.

The first is a piling-on by investors who are excited about other leaders in the EV space, mostly Tesla Inc. but also including Nikola Corp., which have recently been on the receiving end of runaway interest from investors.

Tesla’s stock has launched to record highs in the last few weeks, rising to $1,544 a share as of the closing bell Friday. That’s more than four times its price in March.

The company has reported strong sales in China, where people are in a car-buying mood after emerging from coronavirus lockdowns. If Tesla reports a profit in the second quarter, it will have the yearlong profit streak that is a requirement for inclusion in the S&P 500 Index, a milestone on Tesla’s road to mainstream credibility. Tesla reports its second-quarter results on July 22.

Despite struggling to produce 90,000 vehicles a quarter, nowhere close to the millions of units made a year by many major automakers, Tesla’s market capitalization now far exceeds the combined value of GM, Ford Motor Co. and Fiat Chrysler Automobiles NV, the major U.S. automakers.

Tesla’s red-hot status confounds those who look at the numbers.

"I am yet to come up with a logical explanation for Tesla’s valuation," Chandrasekaran said.

Meanwhile, Nikola has made a similar splash, though it is an infant manufacturer that has yet to produce a vehicle.

Nikola’s proposition is to build big, long-haul trucks that are powered by either hydrogen fuel cells or by lithium-ion batteries. It also plans to remove a barrier to adoption by constructing a network of hydrogen truck fueling plazas.

Investors applauded the premise by sending Nikola’s stock soaring after its initial public offering in early June. It is now almost 60% above its initial price.

"It holds a lot of promise," said Sam Abuelsamid, an auto analyst at advisory firm Guidehouse LLP. But, he added, "the challenge is that Nikola is still vaporware."

The second reason is intensifying interest from large, institutional investors, some of which have started to take climate impacts more seriously this year. EVs are an easy way to start.

"EVs represent the strongest way to battle transport emissions, and with that, climate change," Chandrasekaran said. "Considering how forward-thinking some of the institutional investors need to be, it is a smart move to future-proof their portfolios."

Fisker announced on Wednesday a new round of $50 million of funding to advance the engineering of the Fisker Ocean, an all-electric SUV that the company claims will be ready in two years.

That, however, could be small change compared with a potential $2 billion acquisition of Fisker that was reported by Reuters on Thursday.

The so-called blank-check acquisition would have a different, publicly traded shell company take over Fisker and thereafter assume Fisker’s identity. The leading candidate to do the takeover, Spartan Energy Acquisition Corp., shot up in value on the news.

Nikola pursued a similar strategy with its IPO last month.

The Fisker deal could be announced as soon as this week, Reuters reported. Fisker did not respond to a request for comment.

Fisker is the eponymous creation of Henrik Fisker, a Danish veteran of automakers BMW and Aston Martin.

In 2007, he founded Fisker Automotive. Its flagship electric car, the Karma, produced a great deal of publicity and about 2,000 road vehicles before the company filed for bankruptcy in 2013. In 2014, the Karma’s design and other assets were sold to the Wanxiang Group, a Chinese company active in clean energy.

It is Wanxiang that is behind the new and resuscitated Karma.

Karma currently makes the Revero GT, a long and low-slung performance hybrid-electric sports car that starts at $135,000. After several iterations that failed to impress, Karma found some footing and sold 500 units last year.

It plans to make an all-electric version next year, and then split its offerings into a luxury supercar, an electric delivery vehicle, and a "skateboard" chassis that would serve as the basis for other automakers’ electric models.

On Wednesday, Karma garnered $100 million from outside investors and revealed it is seeking $300 million more, a spokeswoman confirmed. Bloomberg first reported the funding round.

Both Fisker and Karma also share a history of struggling to mass-produce EVs, which might not bode well for them.

"I’m not sure how much anyone is going to trust Karma. They don’t necessarily have the greatest track record," Abuelsamid said. Of Henrik Fisker, he said, "his background in making and selling vehicles is spotty, to say the least."

The company to get the biggest funding boost last week was Rivian, a new automaker that unveiled prototypes of its electric pickup, the R1T, and SUV, the R1S, in 2018 to rave reviews. The vehicles are due off the assembly line early next year.

Last year, Rivian was buoyed by investments of $500 million by Ford and $700 million by Amazon.com Inc., which ordered 100,000 delivery trucks based on Rivian’s skateboard.

The new haul of $2.5 billion reflects the fact that others take Rivian seriously — and suggests there are other big orders for Rivian vehicles that are not yet public, Abuelsamid said.

"They’re coming out of the stage, when they start production, with a backlog of real orders," Abuelsamid said.

Rivian, with a factory in Normal, Ill., that was once a Mitsubishi plant, now boasts total investment of $5.6 billion, according to Crunchbase — an astonishing sum for an automaker that has yet to make a single production vehicle.

But "their valuation," said Abuselsamid, "is probably not insane."