An explosion of lava. Did warming trigger this eruption? 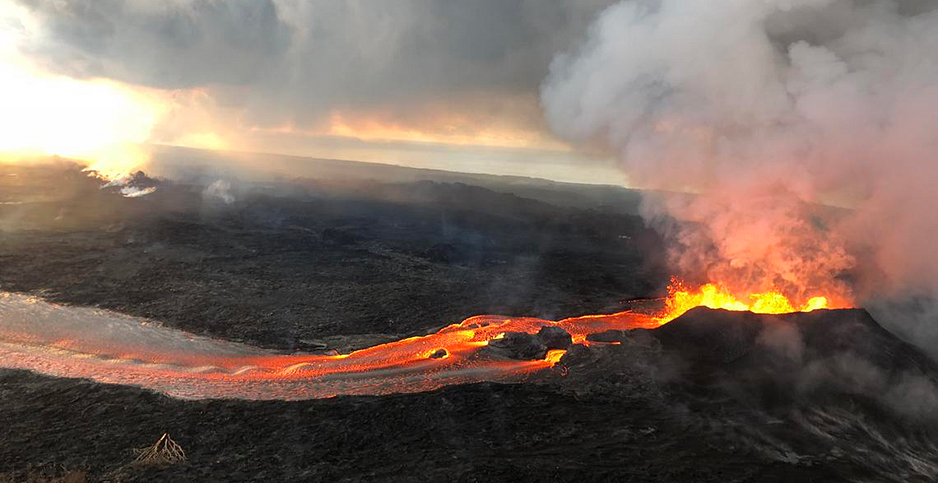 In the spring of 2018, Hawaii’s Kīlauea volcano exploded in what would be its most devastating eruption on record. More than 200 billion gallons of lava spewed from the ground and oozed across the landscape, destroying hundreds of homes in fiery rivers.

The volcano had likely been ready to blow for several weeks before it finally erupted. Now some scientists believe an unexpected factor helped push it over the edge.

A surprising study suggests that extreme rainfall in Hawaii may have been the trigger.

If that’s the case, the researchers suggest, intensifying downpours — potentially worsened by climate change in the coming decades — might influence other volcanoes around the world. But experts caution that it’s still too early to start connecting those dots.

Kīlauea was hit by unusually heavy rains in the months leading up to its eruption. At one point in April, more than 4 feet of rain fell in a single day — a record not only in Hawaii, but for the entire U.S.

As this was happening, large volumes of water were seeping into the porous rock around the volcano. Eventually, the underground water pressure became too great. The rocks began to fragment, and magma flooded to the surface.

The findings were published in Nature this week by Jamie Farquharson and Falk Amelung, scientists at the University of Miami.

The pair used a simplified model of Kīlauea to investigate their theory. Their model suggests that the underground pressure, or "pore pressure," caused by the rainfall was the highest the area had experienced in nearly 50 years. It should have been enough to weaken the rock, they say.

Still, the heavy rains weren’t the only driver of the eruption. Volcanic activity had been increasing for some time, and pressure was already rising below the surface as magma was bubbling up.

The water pressure just gave things an extra kick, according to Amelung.

"The volcano has to do its regular things," he said in an interview with E&E News. "So I think it was a combined effect, both the water pressure and the magma pressure, that did it."

The study isn’t the first to suggest a link between rainfall and volcanic activity.

According to Farquharson, other scientists have made similar suggestions about eruptions at Mount St. Helens in Washington state and the Soufrière Hills volcano on the island of Montserrat.

Some studies have also suggested a related connection among heavy rains, rising underground pore pressure, and earthquakes or other seismic activity. In general, it’s well known that changes in pressure underground, often caused by the injection of fluids, can affect the movement of the earth.

"This is a concept that’s actually pretty common in geophysics and has been known about for many decades," said Bill Hammond, a geophysicist at the University of Nevada, Reno, who commented on the study for E&E News.

But according to Farquharson and Amelung, these kinds of processes have rarely been observed occurring so deep below the Earth’s surface — at least when it comes to volcanoes.

"In the case of Mount St. Helens and Soufrière Hills Volcano, for instance, researchers were mostly interested in the interaction of rainfall on the surface or immediate subsurface," Farquharson said in an email. "By contrast, we are proposing changes in pressure at depths of 100s to 1000s of meters below the surface."

What’s more, the researchers suggest, the 2018 event wasn’t the only time Kīlauea was triggered by rainfall.

"It’s not [that] each time there is rainfall we’re going to have an eruption in Hawaii," cautioned Fabien Albino, a volcano expert at the University of Bristol. "It’s more like it can help to make the final push."

For now, experts are uncertain how significant the influence of rainfall was at Kīlauea in 2018.

Michael Manga, a geophysicist at the University of California, Berkeley, published a written comment on the study in Nature this week. He noted that "the pressure changes computed by their models are small — smaller than stresses from tides."

If the rocks were already close to breaking, he suggested, small pressure changes could deal the final blow. But ultimately, whether water pressure can initiate a failure at the depths suggested by the study remains uncertain, he said.

According to Hammond, the general theory is reasonable.

"It is a mechanism that has been cited many, many times in many different contexts," he said. "So they’re looking at an effect that has a certain scientific plausibility and acceptance."

But he also cautioned that the overall influence of heavy rainfall, at Kīlauea or elsewhere, is probably minor. The added water pressure would most likely slightly adjust the timing on an eruption or an earthquake that was already bound to happen.

"You can maybe make it happen on a Tuesday instead of a Friday if you move the earth the right way," he said.

‘A lot of work to continue’

For now, scientists are scratching the surface of the links among rainfall and volcanic or seismic activity. That means any possible influence from climate change is deeply unclear.

In the study, the authors note that "as our climate continues to change, the occurrence of prolonged periods of extreme rainfall is predicted to increase in many parts of the world, increasing the potential for rainfall-triggered volcanic phenomena."

It’s true that climate change will likely drive an increase in extreme rainfall, or a more intense rainy season, in some parts of the world. But whether it will be enough to cause noticeable changes underground — or whether the geology in these locations would even permit that to happen — is another question.

Kīlauea, for instance, sits in a bed of highly porous rock, where water can easily trickle into the ground. That’s not true everywhere.

"If you look around the entire Earth and you found a place where there are active volcanoes, and if the vagaries of climate change happen to increase extreme rainfall in those places, and it’s the kind of volcano that you have in Hawaii with high porosity rocks that allow extreme rainfall to penetrate deep into the earth," Hammond noted — then the idea might hold up.

"There are a lot of geologic factors which limit the very broad applicability of this kind of mechanism to volcanoes around the world," he added. "But there may be other places on Earth where all those conditions would be met."

Hammond also pointed out that the processes described at Kīlauea aren’t the only potential links between climate and volcanic activity. Some of his own research has investigated the influence of pressure on the surface of the Earth, as opposed to fluid pressure underground.

In a less porous area, water — or snow — can accumulate on the surface and press down on the earth from above. This kind of surface pressure can actually inhibit earthquakes and volcanic activity. On the flip side, if a drought occurs and this pressure is released, seismic activity may increase again.

All of this is to say that links between climate and weather aboveground and the movement of the earth below ground are complex and likely to differ dramatically from one site to another.

For now, a good starting place would be to investigate other volcanoes and try to determine if they might also be affected by rain, Albino suggested. Monitoring other sites around the world to see if their activity has any correlation with weather patterns might be one step.

"I think there is a lot of things to do, a lot of work to continue before we get a sense of how climate change and events will cause — or not — an increase of volcanic eruptions," he said.