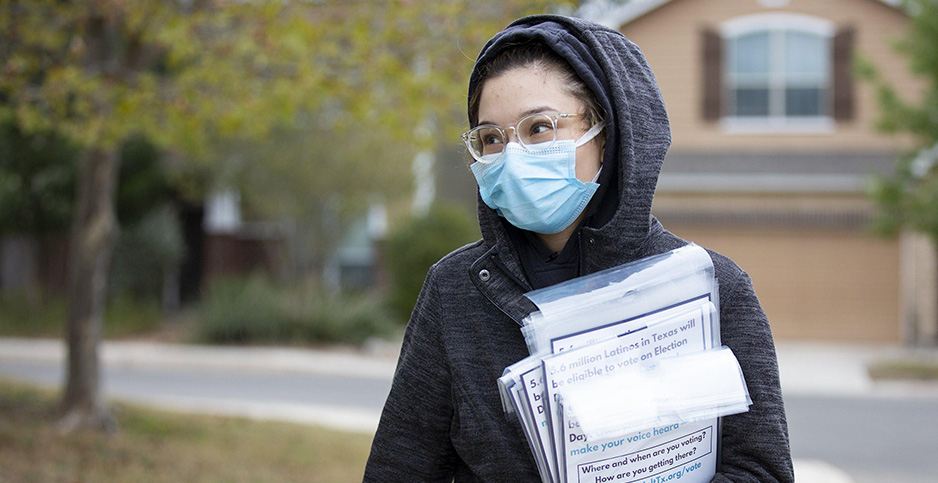 Heading into the 2020 election, Democrats and climate activists believed that Hispanics’ concern about global warming would drive a wedge between Latino voters and President Trump.

But Trump’s improved showing with Hispanic voters and his startling vote totals in some Democratic-leaning Hispanic counties are raising questions about the importance of climate change in the nation’s sprawling and diverse Latino communities.

The latest election returns and polling show that Hispanics minimized climate change as an issue in deciding whom to support for president this year and that some were alienated by President-elect Joe Biden’s approach to climate change.

A preelection poll by Latino Decisions found that while Latino voters strongly support government action to address climate change, only 9% said climate change was an important issue for their community that officials should address. Climate change ranked ninth out of 18 issues in importance — well below COVID-19, jobs and the economy, and health care costs as Hispanics’ top concerns.

In the same survey, 13% of whites said climate change was one of the most important issues, an apparent contradiction to earlier studies showing Hispanics were more concerned about climate change than whites. Preelection research from Yale University found that 69% of Latino voters were alarmed or concerned about global warming. That ran ahead of 57% of Black voters and 49% of white voters who said they felt the same (Climatewire, Sept. 18).

"They just have way bigger things on their mind," said Latino Decisions senior analyst Stephen Nuño-Perez. "If you’re talking about the existential crisis of climate change versus how am I going to keep my job so I can feed my kids, that’s generally what’s going to be the primary concern."

Although climate change was a minor issue in a campaign dominated by the pandemic and Trump’s leadership, Democrats and climate activists hoped that the sharp distinction between Biden and Trump would help draw Hispanics to support the Democratic nominee.

Biden won Hispanic voters by about a 2-to-1 margin, continuing a pattern that has spanned the past four presidential elections. But he lost ground in several key areas where climate change and climate-related policies were prevalent.

In Zapata County, Texas, which is 93% Hispanic, voters shocked Democratic leaders by supporting Trump narrowly over Biden. The small county on the U.S.-Mexico border near Laredo, Texas, had supported Clinton by a 2-to-1 margin over Trump in 2016 and supported every Democratic presidential nominee since at least 1992.

But Zapata County is a major natural gas producer. Its residents were swayed by Trump’s backing of the industry in contrast to Democrats, whose climate pledges in the presidential primaries showed they "were going to not support the oil and gas industry," said County Judge Joe Rathmell, who functions as the county’s chief executive.

"The statement in the final debate [by Biden] that the U.S. should transition away from fossil fuels, I think that threw many of our local Democratic supporters over to Trump," Rathmell said.

Zapata County voters supported every other Democrat on the ticket in November, including M.J. Hegar, who lost by a substantial margin statewide to Republican Sen. John Cornyn.

"Certainly it’s a concern," Rathmell said of climate change. "But their livelihoods will take precedence over that. We’re in a county where we have little or no industry."

Trinidad Gonzales, a professor of history and Mexican American studies at South Texas College, said the natural gas industry in South Texas "is one of the primary pathways for many people in this area of Texas to get a great job and support their kids to go to college."

Many Hispanics in South Texas are "Tejanos," culturally conservative Mexican immigrants whom Gonzales compared to the working-class "Reagan Democrats" of the 1980s.

Local Democrats vow that "they’re not going to take my guns or jobs from the energy field," Gonzales said. He added that many residents would not have been alienated by Trump’s criticism of immigrants and his vow to expand a border wall between the U.S. and Mexico.

Climate also had plenty of competition for voters’ attention this year. Shanna Edberg, director of conservation programs at the Hispanic Access Foundation, said Hispanics’ overriding concern about the economy, COVID-19 and health care access reflects their disproportionate suffering and economic harm from the pandemic.

But she added that climate concerns are related to these troubles. "We need to make the connection clearer that these really aren’t separate issues. Air pollution worsens COVID, and air pollution is what’s causing climate change," Edberg said.

The results in Zapata County were mirrored in many gas-producing Hispanic-majority counties in Texas and elsewhere in the U.S.

Heavily Democratic Webb County, Texas, is 96% Hispanic and the second-leading natural gas producer in the state. Trump received twice as many votes this year as he did in 2016, even as he lost the county. Biden received slightly fewer votes than Clinton got in 2016.

An E&E News analysis shows that in the 82 counties in which Hispanics are a majority of the population, Trump improved his performance over 2016 in 69 of the counties. The Hispanic-majority counties are mostly in Texas, California and New Mexico.

In perhaps the best-known example, Trump closed the gap in traditionally Democratic Miami-Dade County, Fla., winning 200,000 more votes than he got in 2016. Biden received slightly fewer votes than Clinton.

Miami-Dade County, which is 65% Hispanic, still gave a majority of its vote to Biden. But Trump’s stronger showing in the nation’s seventh most populous county was a key to his winning Florida and its 29 electoral votes.

Miami-Dade County is on the forefront of climate change, having been battered repeatedly by hurricanes in recent years and facing so-called sunny day flooding due to rising sea levels.

County voters ousted Democratic Reps. Donna Shalala and Debbie Mucarsel-Powell, both of whom had advocated for action on climate change.

Lizet Ocampo, political director of the liberal advocacy group People for the American Way, said Trump’s improved showing in Miami-Dade County was not a rejection of climate change but a payoff for Trump’s advertising and outreach.

"Trump had been investing for nearly three years there," Ocampo said.

Trump’s best showing among Hispanics occurred in Florida, where he took 38% of the Hispanic vote, according to the Latino Decisions poll, which was taken from 15,200 people who had already voted or were certain to vote on Election Day.

His worst showings were in the key swing states of Michigan and Wisconsin. Trump carried only 22% of the Hispanic vote in both states, which Biden won.

Latino voters were critical in moving Arizona into Biden’s column. An NBC News analysis of exit polling found that 63% of Arizona Latinos backed Biden, a slight uptick from the 61% garnered by Clinton in 2016.

"It’s important to see the bigger picture of how the Latino community supported Biden," Ocampo said, while acknowledging that Democrats and climate advocates need to do more outreach.

"There needs to be investment in Latino voters," Ocampo said. "A lot of people didn’t know Biden."

Trump’s showing in Miami-Dade County also reflects the diversity of Hispanics in the U.S., who come from numerous countries that shape their views toward issues including climate change.

"Latinos are not a monolith," said Edberg of the Hispanic Access Foundation. "Different Latin American countries have different economic sectors. Mexico is a big oil producer. If you’re a Mexican who has immigrated to Texas and is working in that industry, that’s kind of an anti-climate background from start to finish."

Roughly 60% of U.S. Hispanics are from Mexico, according to Census Bureau figures. But in Florida, Cubans are dominant and account for 28% of the Hispanic population.

Trump bombarded South Florida with advertising warning about Democrats and socialism, a message aimed at Cubans who fled Fidel Castro.

Michael Méndez, a professor at the University of California, Irvine, and author of the new book "Climate Change From the Streets: How Conflict and Collaboration Strengthen the Environmental Justice Movement," said Hispanics respond to climate change as an issue when it is presented in the context of its everyday effects.

"When you make climate change real — when you put it in that economic and public health frame — that’s when climate change becomes a priority for a lot of Latino communities," Méndez said.