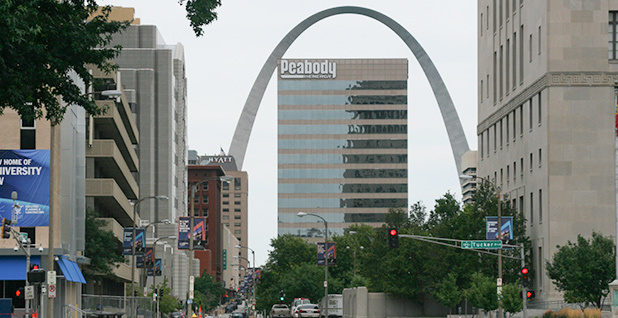 Cheap and plentiful natural gas, as well as an oversupplied market of inexpensive coal — not environmental regulations — are the primary forces behind Peabody Energy Corp.’s bankruptcy and others in the U.S. coal industry, a wide range of financial experts said.

Industry leaders and many lawmakers have laid the blame largely at the feet of a federal "war on coal" — specifically the Obama administration’s Clean Power Plan to curb power plant emissions. But analysts who follow the coal industry say that while government standards have increased costs for Peabody and other producers in recent years, they are not the leading cause of the bankruptcies plaguing the industry.

"The kind of collapse that we’re seeing in the coal industry right now" is primarily due to natural gas competition, said Anna Zubets-Anderson, who covers the coal industry for Moody’s Investors Service. Coal prices are too low for many mining companies to survive, and overseas competitors are closer to countries where demand is high, she said in a recent interview.

"That’s the critical issue for Peabody, and that has nothing to do with the Clean Power Plan," she said of natural gas. "It’s not really a question of a specific rule."

Peabody executives said the drop in prices for steel-making metallurgical coal and thermal coal — used for heating — pushed the business into bankruptcy. They also blamed a weakening Chinese economy, the El Niño effect and an "overproduction" of natural gas in the United States.

Managers at other top U.S. coal mining companies made comparable explanations when they filed bankruptcy papers.

Rivals Alpha Natural Resources, Arch Coal and Walter Energy each filed in the past year for Chapter 11 protection, which allows debtors to reorganize company finances and later re-emerge for business. Since 2014, at least five far smaller coal-mining companies in Kentucky, Pennsylvania and West Virginia have filed bankruptcy documents to liquidate their businesses.

The dozens of coal bankruptcy cases filed in recent years have ignited a debate regarding the decline of U.S. coal.

The industry contends that burdensome U.S. EPA policies — like the Mercury and Air Toxics Standards (MATS), Cross-State Air Pollution Rule (CSAPR) and Clean Power Plan — are to blame, while environmental groups maintain that low-priced natural gas, slowing coal demand and the flagging global and Chinese economies are primarily behind the collapse.

Wyoming Gov. Matt Mead (R) two weeks ago said climate regulations are driving coal companies out of business (ClimateWire, April 1). Other politicians in coal-centric states and industry leaders have echoed the same message in recent months, arguing that the federal government has declared a "war on coal" with regulatory red tape and carbon emissions targets.

"Things that the EPA has been doing on an incremental basis over the decades, those do have an effect on the cost of doing business," said Chiza Vitta, a metals and mining analyst at Standard & Poor’s, adding that MATS and CSAPR in particular add expenses for operating coal-fired power plants.

Yet while banks have recently slowed or stopped loaning money to the domestic coal industry, and the Interior Department froze coal leasing on federal lands in January, natural gas is still the most powerful force behind this bankruptcy wave, Vitta said (Greenwire, Jan. 15).

Industry: Government has ‘thumb on the scales’

Most of the nation, except for certain mines and regions of the Powder River Basin in Wyoming and Montana, has been priced out of the market by foreign competition, Vitta said.

Vitta and Zubets-Anderson said U.S. coal mining will certainly decline but, at least for many years, won’t disappear. "I would more liken it to changing in size," Vitta said.

Hurdles like the Clean Power Plan, restricted bank lending and the moratorium would crimp the industry if it were booming, Vitta said.

"A lot of this stuff, to put it in short, would have an effect only if the industry is growing," he said.

"The government has clearly had its thumb on the scales," Duncan said when asked of the leading cause of coal bankruptcies. "I think you’ve got to start with that, then you get into other factors."

Falling domestic exports, cheap gas, a slower Chinese economy and an oversupplied coal market globally have all contributed to the closing of coal mines, coal-fired plants and job losses, Duncan said. The MATS rule is especially pernicious, he added.

Yet the government has targeted coal plants, and rules like the Clean Power Plan make investors and companies skittish about putting down money in an uncertain market, he continued.

"This is all a signal to the industry to quit building coal plants," he said. "I believe during [the next five years] that you’ll see a natural rise in natural gas prices."

Natural gas prices per unit have fallen from more than $12 to $2 in the past eight years, based on the Federal Reserve Bank of St. Louis’ data.

The U.S. Energy Information Administration forecast last month that natural gas will supplant coal as the No. 1 source for electricity generation this year. And coal’s share of generation fell to 33 percent last year, compared to 40 percent in 2014 and 50 percent or more in the 1990s and early 2000s.

"Clearly, substitution of natural gas for coal was a huge driver," said Luke Sussams, a researcher at the Carbon Tracker Initiative in London.

He and his peers haven’t ruled out the role environmental rules play.

"We do also see a role for environmental regulation," he said by email. "Specifically because from 2012 to 2015 the price of U.S. natural gas actually rose steadily, but market indices for U.S. coal continued to fall noticeably." Prices overall in that three-year window rose slightly.

This pattern, Sussams said, suggests the U.S. energy market could have changed structurally, "which could be attributed to the numerous environmental regulations that were implemented before this gas price increase, that also suppressed demand for coal."

Peabody has $11.02 billion in assets and $10 billion in liabilities, the company told the U.S. Bankruptcy Court for the Eastern District of Missouri.

"This was a difficult decision, but it is the right path forward for Peabody," said CEO Glenn Kellow of the bankruptcy filing, calling the current market a "historically challenged industry backdrop." Peabody will address its "substantial" debts in court, he said.

The St. Louis-headquartered company listed billions of dollars in debts to its creditors, government agencies and local communities: billions to banks, lenders, states and equipment contractors, millions in black lung and retirement benefits and $723 million in reclamation obligations alone.

"The company is a global leader in sustainable mining, energy access and clean coal solutions," Amy Schwetz, Peabody’s chief financial officer, told the Missouri court. After exiting bankruptcy, she said, "the debtors believe these factors will provide the basis for the company to be a leader in the industry well into the future."

Peabody traces its history to 1883 and operates mines in the United States and Australia, all of which will continue running.

At the end of last year, Peabody had a stake in 26 active coal mines in both countries, including in Arizona, Colorado, Illinois, Indiana, New Mexico and Wyoming and Western Australia. No Australian units of the business are part of this bankruptcy case.

"It’s clear that Peabody had another outstanding quarter," said then-CEO Greg Boyce on an earnings call for the second quarter of 2010.

The company made $214 million during the period and in 2011 acquired Macarthur Coal Ltd., an Australian company, for about $5 billion.

"Now in the U.S., economic activity is yet to fully recover, with much more upside potential in the future," Boyce told analysts. "But even so, coal supply demand fundamentals are solid in 2010."

Employment in the U.S. coal industry has fallen from roughly 90,000 in late 2011 to 56,700 in March, according to the latest Bureau of Labor Statistics projections. The drop has been steady and swift. Several thousand miners have lost their jobs every year since 2011.

By 2014, unemployment rates in U.S. counties were far higher than the national average, which hovered around 6 percent. In Mingo County, W.Va., unemployment then was 11.8 percent. In Letcher and Pike counties in Kentucky, the rates were respectively 12.3 percent and 10.5 percent.

In a Feb. 18 note titled "Two Steps Forward, Three Steps Back," Barclays PLC analyst Matthew Korn
and colleagues said Peabody stock was worth $1 a share, down from more than $1,000 in 2011. Shares hit about $2 this week.

"We’ve seen the company hustle over this past year to make use of every available vehicle for cost and cash savings," they said, "but unfortunately management hasn’t been able to outrun the declines in coal and gas prices."