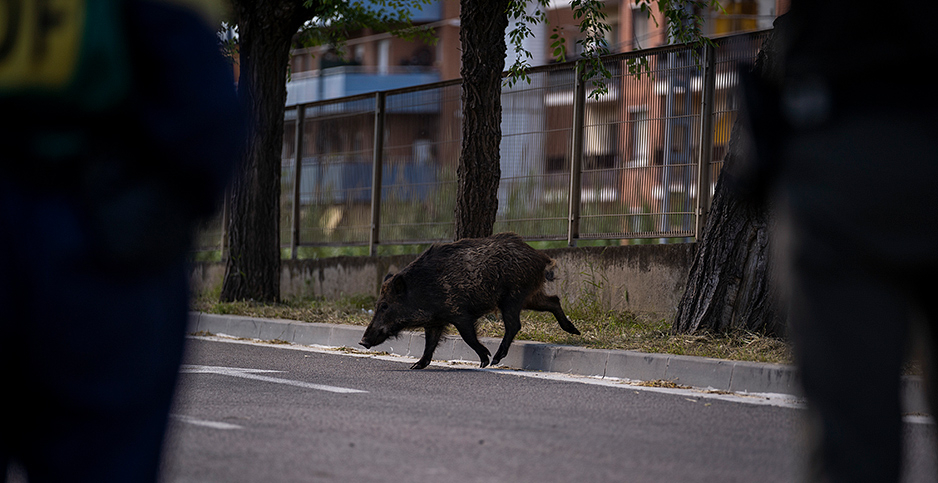 A wild boar walked through an empty street in Barcelona as people sheltered in place during the coronavirus pandemic. Xinhua News Agency/Newscom

"Now that there are no people, the bears are literally just walking down the road to get to where they need to go, which is kind of cool to see — absolutely," said wildlife biologist Katie Patrick in a recent Facebook Live video.

Similar stories abound as animals adjust to the novel coronavirus pandemic. With more people staying indoors, animals are discovering their playgrounds have expanded. As places start to reopen, experts are eager to study whether there will be any long-term changes in both animal and human behavior.

"Wildlife are behaving differently — they’re moving into spaces that we’ve vacated," said Beth Pratt, the California director of the National Wildlife Federation. "You’re seeing this play out all over."

At South Africa’s Kruger National Park, a ranger found a pride of lions sleeping on a road that usually would be filled with tourists.

And in South Florida, sea turtles won a temporary reprieve from the bright lights of boats and packed beaches, giving them a more peaceful environment in which to nest.

"I am convinced that some of the most significant sources of sea turtle mortality that we typically see in Florida, including boat strikes, disturbance of nesting turtles by people on the beach and disorientation of hatchlings by lights from onshore will be lessened as a result of massive changes in human behavior," said David Godfrey, executive director of the Sea Turtle Conservancy in Gainesville, Fla.

While the pandemic might come as a silver lining for domestic turtles, there’s a flip side that has wildlife advocates worried. The risk to sea turtles in developing countries has grown as the travel industry has collapsed, leaving people desperate for food and beaches unprotected from poachers.

"The situation for sea turtles on beaches in places like Costa Rica, Grenada, Nicaragua and elsewhere is dire," said Brad Nahill, president and co-founder of SEE Turtles, a nonprofit based in Oregon.

The internet has exploded with videos and stories of animals acting in new ways, though National Geographic warned of "fake animal news." One fake post that went viral showed a group of elephants on a street in Yunnan, China, after they supposedly got drunk on corn wine and passed out in a tea garden.

‘They’re having a party’

But there have been plenty of authentic reports, too.

Wild boar showed up on the streets of Barcelona and mountain goats took over a small town in Wales, according to a report in The Washington Post.

And in Pennsylvania, The Morning Call reported that an official at the Pocono Wildlife Rehabilitation and Education Center had noticed something very unusual on Lehigh Valley highways: With fewer cars on the road, fewer opossums were getting run over this spring.

Pratt said she has noticed many smaller changes, too: more people hearing the sound of birds singing in new places, more birdwatching and a report of one bird that made its nest on the rearview mirror of a car that was no longer being used Greenwire, May 4).

"People are making picnic tables for their backyard squirrels," she said.

While the issue of wildlife behavior has drawn widespread attention, not all national parks are experiencing visible changes. That includes Yellowstone National Park, where officials say little has changed.

"Yellowstone’s got so many animals all over the place all the time — I’ve not seen anything out of the ordinary," said Superintendent Cam Sholly.

With many parks still closed, the National Park Service is urging those locked indoors to connect with parks online. Among other things, NPS is pitching its wildlife webcams and encouraging visitors to check out a "virtual park."

At Yosemite, park officials have been busy promoting their wildlife on Facebook. The park posted a photo of a coyote in an empty parking lot and a video showing a bobcat, deer, foxes and its famous black bears roaming freely in the shuttered park last month.

In the Facebook Live event, Patrick said bears have enjoyed the break from humans. Park officials say there’s been no increase in the bear population since the park closed on March 20, but they’re definitely easier for park staff to see now.

"For the most part, I think they’re having a party," Patrick said.

While the stories are only anecdotal at this point, experts say studies are sure to follow to determine any long-lasting changes that result from the pandemic.

"The thing we really have to watch is what happens when human activity ramps up," Pratt said. "As more and more people wake up to bird songs they’ve never heard, I do think we’re building a conservation movement here. Not everybody’s going to be willing to go back to hearing the loud noises."

For now, she said, more people are connecting with wildlife "in a way that is meaningful," and she hopes people adjust their behavior and become more respectful of wildlife in the long run.

"This is a scientific experiment in some respects that we never wanted to conduct this way — it’s on the back of a lot of human suffering," Pratt said. "But wildlife is something that does bring us a lot of solace and a lot of peace and joy, and now more than ever, we need it."