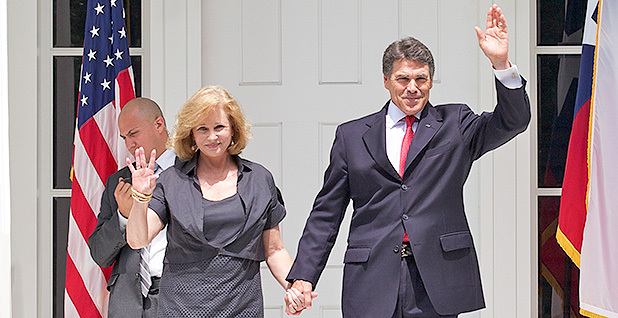 Perry spoke on energy issues and was briefed by State Department officials and private companies at the 24th annual Africa Oil Week in Cape Town, according to DOE.

"In addition to speaking about women in energy, she attended the Secretary’s keynote address to Africa Oil Week and engaged with both public and private energy stakeholders at events throughout the week," DOE spokeswoman Shaylyn Hynes said in an email.

"Mrs. Perry was an effective member of the delegation. Both her passionate message and presence were well received and we look forward to utilizing her as an asset to further the Department’s efforts in the future."

Perry’s trip has raised a host of unanswered questions among former agency officials and ethics experts at a time when investigations into the use of chartered flights are occurring across the federal government.

While it remains unclear who Perry met with in South Africa, the Energy secretary last week tweeted photos of his wife standing alongside State Department officials, appearing on panels discussing gas exports and sitting at the table during a discussion with the U.S. Consulate General of Cape Town, a branch of the U.S. diplomatic mission to South Africa.

DOE declined to provide information about the cost of Anita Perry’s travel or her qualifications for serving as a delegate. But the department touted her expertise as Texas first lady in April when she was part of a DOE delegation that traveled to the Group of Seven ministers’ meeting in Taormina, Sicily.

DOE then said that Perry’s trip, for which no cost estimate was provided, would be covered as part of the department delegation and that it had been reviewed by the agency’s general counsel and was "not out of the norm."

Anita Perry, 65, graduated from what was then West Texas State University in 1974 with a bachelor’s degree in nursing. She has a master’s in nursing from the University of Texas Health Science Center at San Antonio and spent more than a decade in health care, including as a nurse in the areas of surgery, pediatrics, intensive care, consulting and administration.

The daughter of a physician, Perry has called health care "a lifelong passion" and helped develop and host the annual Texas Conference for Women that draws attention to women’s professional development, health care and personal growth, according to an online biography. Her former chief of staff in Texas, Michelle Sneed, has also landed a DOE job (Greenwire, Oct. 3).

Perry’s trip to South Africa comes as House Democrats push for more details about Rick Perry’s travel and whether DOE’s oversight is sufficient to prevent fraud, waste and abuse.

DOE recently released documents showing the secretary spent $56,000 on trips with ethics approvals, mainly to visit national labs, nuclear sites and at least one coal mine at the request of the White House.

Tara Porter, assistant inspector general for management and administration at DOE, said in an email the office had received a request from Democratic Reps. Frank Pallone of New Jersey, Bobby Rush of Illinois and Diana DeGette of Colorado.

"We are reviewing the contents of the letter," Porter said.

DOE’s general counsel declined to comment on Anita Perry’s trip or whether the secretary had sought ethical guidance.

Ethics experts highlighted the need for details surrounding her travel.

Richard Painter, who was chief ethics lawyer for President George W. Bush from 2005 to 2007, said it appeared Perry was serving as a government official uncompensated on a part-time basis. He also raised questions about whether the former Texas first lady’s service would violate anti-nepotism statutes.

"The D.C. Circuit in a controversial opinion in 1994 went to great lengths to explain why there might be an exception to the nepotism law that would allow President Clinton to delegate certain health care policy duties to Hillary," said Painter, who’s now a law professor at the University of Minnesota and vice chairman of Citizens for Responsibility and Ethics in Washington.

DOE did not immediately provide information about past trips other spouses of Energy secretaries have taken, but in the most recent examples, the spouse either was directly invited by the White House or reimbursed the cost of travel.

One former Obama-era agency official said past travel by Cabinet members’ spouses was rare and would have been closely coordinated with DOE ethics officials.

Cabinet secretaries, for example, may be asked to lead the U.S. government’s official delegation to the inauguration of a foreign leader or at a major gathering like the Group of 20, said Jeff Navin, who was acting chief of staff at DOE under Secretary Steven Chu.

At those events, there wouldn’t have been any official policy role, expectations or official U.S. representation for the spouses of Cabinet heads, he said.

Aside from legal questions, Navin said, there are obvious optical concerns, given that President Trump’s Health and Human Services Secretary Tom Price resigned amid a firestorm over the use of private and government planes.

"If I were there, it’d be the kind of thing I would do if, and only if, the White House ordered me to do it in writing," Navin said. "You know the question is going to be asked. Being the spouse of a Cabinet secretary is different than being the first lady of the United States or first lady of Texas."

‘Visible but not prominent’

Often described as a quiet and camera-shy yet powerful force in Rick Perry’s political campaigns, Anita Perry is known for her work on health care issues.

Cal Jillson, a political science professor at Southern Methodist University in Dallas, said it would make sense for husband and wife to travel together, noting the Perrys have been careful not to run afoul of travel restrictions and payment.

Jillson said Anita Perry has been better known for her work in health care and during her husband’s tenure as Texas governor, when she was "visible but not prominent." He cast doubt on either the secretary or his wife jumping into future political roles, saying they’re likely destined for the private sector.

"She’s an adviser and counselor [to Rick Perry] on everything from glasses to whether to make a second run for president," Jillson said. "As wives and husbands talk about what’s next in their collective life, that’s a very common thing, but she doesn’t seem to have political aspirations."