Another GOP group wants to tax carbon. Does it matter? 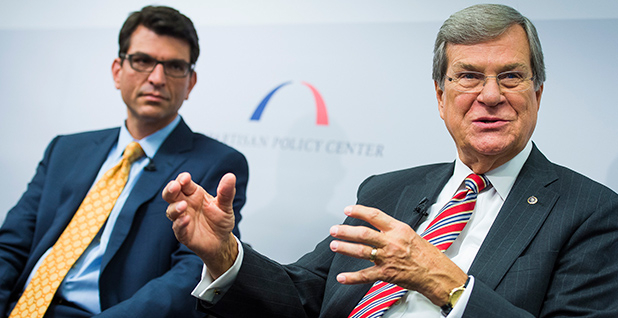 And yet a group of companies thinks the time is right to add muscle to a carbon tax push.

The new group, Americans for Carbon Dividends, brings lobbying heavyweights and energy industry influence behind a concept that has generated chatter but little action. Its supporters envision a multiyear process of engaging the public, lawmakers and businesses to promote the idea of taxing carbon and returning the revenue to Americans.

"It is envisioned as something that is likely going to take some time, and I don’t think there is any expectation that something will happen on this before the next year," said Dick Keil, a spokesman for the group. "But public attitudes on this topic are shifting."

It will push an idea advanced last year by the Climate Leadership Council, which includes former GOP Secretaries of State James Baker and George Shultz; environmental groups like the Nature Conservancy; and oil and gas companies such as Exxon Mobil Corp., Royal Dutch Shell and BP PLC.

The major development is the level of lobbying that Americans for Carbon Dividends plans to use and its financing by energy firms. It hired former Senate Majority Leader Trent Lott (R-Miss.) and former Sen. John Breaux (D-La.) from Squire Patton Boggs to push the idea and eventually develop legislation (E&E News PM, June 20).

That Exelon is dumping money into the effort signals a new approach for the energy industry, as well. The company has been fighting in various states to secure funding for its financially vulnerable nuclear reactors. Many of those policies have credited nuclear for benefiting the climate with the carbon-free energy it provides.

"This marks the first time in US history that an industry-funded campaign is launched to promote a direct price on carbon, and the first time an industry-funded campaign supports returning all the money directly to the American people," Greg Bertelsen, senior vice president with CLC, said in an email. "It is also the most ambitious climate plan currently being discussed."

The new group is supporting a plan by the Climate Leadership Council, which counts Baker and Shultz among its leaders. It would impose a $40-per-ton tax on carbon dioxide emissions, rising over time. Those revenues would be returned to taxpayers. Regulations enforcing greenhouse gas emissions reductions would be eliminated. Imported goods from nations without a similar tax would face penalties. Companies that emit planet-warming gases could be shielded from liability in litigation involving climate change.

Keil said the basic idea of taxing fossil fuel emitters and giving Americans monthly checks in return is popular. Fifty-six percent of respondents viewed the idea favorably, compared with 28 percent who opposed it, according to an online survey of 2,000 respondents that Hill+Knowlton Strategies conducted between June 4 and 10.

But the survey also revealed what’s been true of climate policy and politics for years — just 6 percent identified climate change as a top-three issue facing the nation. Protecting the environment garnered 3 percent of responses.

"[W]hen Mitt Romney announced he was running for Senate, he said he wanted to focus on three things. I can’t remember the first two, but the third one was addressing climate change," Mike McKenna, a GOP energy lobbyist, said in an email. "That’s an exceedingly odd thing to worry about, given that approximately no one in the Republican Party would put that issue in their top 10, let alone their top 3. No one except … George Schultz [sic] and Jim Baker and the other fellow travelers and the fifth column crowd from the Republican Establishment."

The goal of Americans for Carbon Dividends is ambitious. It’s trying to turn a politically daunting idea into something real during a period of sharp partisanship.

Many conservatives object to a carbon tax because they say it would funnel money back to the general Treasury without clearly reducing overall spending or cutting the deficit. They also worry that it would hike energy prices for businesses and consumers.

A dividend approach is different, its backers emphasized. As the carbon price rises, the checks delivered in the mail will get bigger. That could help lawmakers sell the concept to their constituents, proponents contend.

"Dividends changes the conversation around carbon pricing and are what make this a politically viable long-term solution," said Bertelsen, the group’s senior vice president. "By returning all of the revenue to the American public, we ensure the long-term popularity of the policy, which is what is necessary for ongoing regulatory certainty for businesses and a significant reduction in carbon emissions."

Many carbon tax advocates on the so-called eco-right — a clutch of free-market groups that want to address climate change without top-down regulations — have for years discussed a carbon tax as a key piece in efforts to overhaul the federal tax code. Last year’s tax deal didn’t include any such provision.

Some are optimistic that other chances might emerge. The nonpartisan Joint Committee on Taxation, for example, noted that the tax law signed by President Trump would expand the deficit. Meanwhile, climate change stands to get worse without action. Something will have to give.

"It’s a private discussion moving into the public sphere," said Alex Flint, executive director with the conservative group Alliance for Market Solutions. "Over the last year, I have seen more Republicans looking for climate solutions consistent with their values and also recognizing that tax policy will have to be addressed in the coming years because of the expiration of tax cuts, because of deficit spending."

In terms of addressing climate change, the proposal that CLC outlined would have a major effect, according to nonpartisan think tank Resources for the Future. Modeling based on the proposal showed energy-related carbon dioxide emissions dropped 19 percent below a business-as-usual scenario in 2021 at a $43-per-ton carbon price, fellow Marc Hafstead found. The decrease in emissions becomes more dramatic as the tax’s growth rate increases.

The plan’s supporters also say most Americans come out ahead financially, citing a 2017 Treasury Department report that said the bottom 70 percent of households stand to gain rather than lose. The smaller the carbon footprint, the better return an individual receives.

Still, the political hurdles are numerous. The tax would, as a matter of necessity, raise the cost of energy and energy consumption. That will rile many congressional Republicans who have described various policies to address climate change as energy taxes. The few GOP lawmakers who might feel inclined to support a carbon tax-and-dividend approach aren’t in leadership, limiting their ability to push for votes. Congressional Democrats, meanwhile, have been loath to forfeit regulations that provide a backstop for forcing emissions cuts.

All that assumes a static situation. Americans for Carbon Dividends is betting on change. That’s the goal, anyway. And those who back the idea think the organization’s emergence represents a watershed moment.

"This hopefully brings financial resources to build up right-of-center climate champion — people who really want to entertain ideas about how we can create climate policy that is ambitious, effective, and saleable to their current political coalition," Joseph Majkut, climate policy director with the libertarian Niskanen Center, said in an email. "The ecoright has been pretty successful on making the intellectual and policy case, but both policy and politics matter here."

Correction: An earlier version of this article listed Marc Hafstead as a senior fellow at Resources for the Future; he is a fellow.