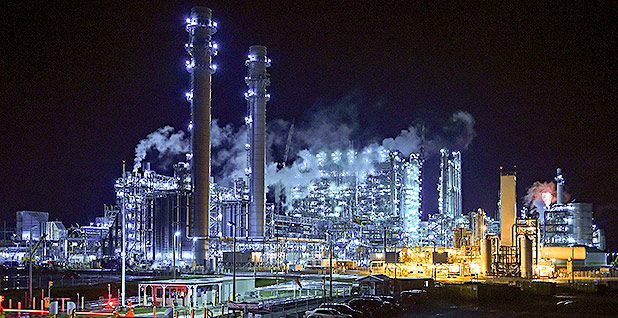 The Department of Energy-funded project will determine whether it is feasible to store carbon dioxide from three of Southern’s power plants in Alabama and Mississippi, including Plant Ratcliffe, a natural gas plant that was originally designed to gasify lignite coal and store the majority of its CO2 emissions. That power plant was known as "Kemper" for much of its construction life until delays and cost increases prompted Mississippi utility regulators to say the facility could run on natural gas only (Energywire, June 22, 2017).

But while some utilities have seriously considered the technology more than others, it’s unclear whether efforts can be turned into working projects anytime soon — and whether company carbon targets may be unreachable as a result. That is so even though electric companies are relying on natural gas more as they transition away from coal and tap backup for renewable power.

Natural gas has less carbon than coal, but it’s not emissions-free. Getting it there is "the biggest issue to solve," said Tom Fallgren, vice president of generation for Public Service Co. of New Mexico (PNM). PNM has a goal to have 100% carbon-free power by the end of 2040.

For PNM, that may be carbon capture, replacing natural gas with hydrogen or methane capture. All have potential but either are costly or haven’t been tested at scale.

"There’s now more certainty amongst investors that there’s a path forward that the utilities can use for that," Powell said.

To what degree utilities consider CCS on gas depends on the makeup of their portfolios and if the technology’s price comes down enough to spur more retrofits, Abouelnaga said. Some utilities — like in Texas or the Midwest — also have better renewable resources like wind at their disposal than Mid-Atlantic states or those in the South, C2ES said. Until storage capability increases to a sufficient degree, natural gas plants will be around as a backup, or "buffer," to renewables, Abouelnaga added.

John Thompson, technology and markets director at the Clean Air Task Force (CATF), said while it’s important that CCS is a part of Southern’s strategy — particularly on gas and biomass — utilities generally need more incentives if they’re to become early adopters of the technology.

"I think the challenge as companies make these pledges, including Southern, is how do we structure incentives at a federal level to encourage them to be a first mover, as opposed to waiting," Thompson said, referring to utilities’ various emissions targets.

There are two current large-scale carbon capture projects on fossil fuel plants globally, including NRG Energy Inc.’s Petra Nova project on a coal plant in Texas. According to the Global CCS Institute, there are at least three large U.S. power generation projects in "advanced development," including Project Tundra, a proposal led by Minnkota Power Cooperative to build a carbon capture project on a coal generator in North Dakota.

In the meantime, many utilities say they are considering CCS technology, even if there’s not advanced construction occurring.

"This is really a study to assess the feasibility … what it would take to get the permits for it, what it would cost," said Jeff Burleson, Southern’s environmental and system planning vice president, in an interview with E&E News last week.

Southern’s coal-fired power plants Miller in Alabama and Daniel in Mississippi will be included in the plan as well as Plant Ratcliffe.

But the sound of it brings back bad memories for Louie Miller, director of the Sierra Club’s Mississippi chapter, which fervently opposed the project for years.

"You’ve got to pipe this stuff," said Miller. "You’re talking about hundreds of millions of dollars … someone has to come up with the money."

What’s more, Plant Daniel runs only 25% of the time, according to data from the Institute for Energy Economics and Financial Analysis. This raises the issue of how much CO2 the power plant will contribute overall.

"It’s hard to capture something that you aren’t making," Miller said.

"The concepts, the engineering concepts are still very valid, but we just don’t recognize that there’s any real value for our shareholders at this point," Burleson said in an interview after the company’s 2019 annual meeting.

"It’s like any failure, you learn from it," Burleson said in 2019. "Now, were the learnings worth the price? I don’t know, but it’s important to learn from failure. The important thing is to learn from everything we do."

"That’s a big transition, and we’ve made that transition for setting that up," he said.

Aside from a large, emissions-free nuclear plant in southeastern Georgia, any additions to Southern’s generation fleet will be a mix of renewables, energy efficiency and natural gas, Burleson said.

The work is so new, is hasn’t reached the pilot stages yet.

The goal is to increase that figure to 60% by the end of this year and then reach 70% by 2030. This will be done primarily by removing what’s left of the remaining coal plants from its generation fleet.

The Charlotte, N.C.-based energy giant’s zero-emissions goal for 2050, with interim cuts by 2030, has kept CCS as an option.

"We see a clear path to that 2030 marker, but by about 2035, we see a need for new technologies," said Sarah Adair, Duke’s public policy director.