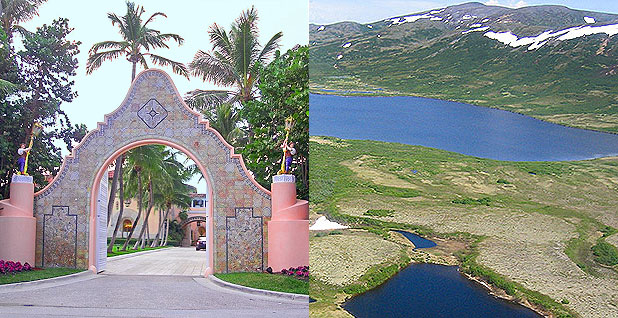 An Alaska financier opposed to the Pebble mine in the Bristol Bay area of Alaska is set to meet with President Trump at his Mar-a-Lago resort, sources said. Photos by Ebyabe/Wikipedia (Mar-a-Lago) and Earthworks/Flickr (Bristol Bay).

One of Alaska’s richest men and a chief opponent of the controversial Pebble mine will meet with President Trump at the Mar-a-Lago resort in Palm Beach, Fla., sources said.

Bob Gillam, who graduated with Trump from the Wharton business school class of 1968, arrived at the president’s Florida retreat today from his home in Alaska, said the sources.

Neither Gillam nor the White House responded to repeated requests for comment or to confirm the meeting. But sources with knowledge of the situation, who spoke with E&E News on condition of anonymity, said Gillam will be at the resort for several days.

Gillam told the Alaska Dispatch News he was in touch with Trump throughout the campaign. The generally media-shy financier publicly vied to become Interior secretary last year after Trump’s election victory.

"I recognized that suddenly it was possible for me to serve in a role that has otherwise been one of career politicians," he said in a statement.

Gillam also told right-leaning blog Must Read Alaska that he was offered a position as deputy Interior secretary but turned it down.

"If you’re not the lead dog, the view never changes," Gillam said he told the Trump team.

When asked about the statements, Interior pointed to the White House, which did not respond to requests for comment about whether Gillam was indeed in line for a job.

Opponents of the Pebble mine hope Gillam, who has helped fund their efforts, will raise his objections to the controversial southwestern Alaska project with the president.

Gillam, 70, owns a private fishing lodge not far from the proposed site for mining one of the world’s richest deposits of copper and gold.

The Trump administration’s antipathy to regulations has spurred hopes that U.S. EPA will turn back on proposed limits on mining in the headwaters of Bristol Bay — home of the world’s largest sockeye salmon fishery.

Conservation groups have appealed to the president to block mining in an area his son Eric Trump, an avid sportsman, visited on a 2014 fishing trip.

The first failed. But more than 65 percent of voters approved the second one in 2014. Mine defenders have yet to challenge it in court, like they did a local one by the Lake and Peninsula Borough (Greenwire, Nov. 5, 2014).

Pebble "will destroy the Bristol Bay salmon runs which have, for generations, provided a livelihood for thousands of Alaskans," Gillam said in sworn testimony.

The statement was part of an Alaska Public Offices Commission investigation into the 2008 ballot measure fight — the most expensive in Alaska history.

The state election watchdog agency accused Gillam of making nearly $2 million in improper payments either directly or indirectly to Alaskans for Clean Water, the group pushing the initiative. Gillam, the group and several others involved never admitted wrongdoing but eventually settled for $100,000.

Most of the money went through Americans for Job Security. The dark money group was founded by political operative Mike Dubke — the new White House communications director.

"It will be a plus for Alaska that someone in President Trump’s inner circle knows and understands our state, our issues and our concerns," Senate Energy and Natural Resources Chairwoman Lisa Murkowski (R-Alaska) told the Alaska Dispatch News.

Despite the proximity of Pebble foes to Trump, the company behind the mine project did not express concern. Pebble LP has said that once the new regulation-averse administration settles in, it will quickly resolve its lawsuits against EPA.

"While we would anticipate [Gillam] may share his well-known personal opposition to Pebble," Chairman John Shively said, "we would also hope he would tell the president, as he recently stated to leaders of Alaska’s mining industry, that he does not believe that EPA should pursue a pre-emptive veto."

Once the restrictions are lifted, Shively said, "we would then be able to file a permit before the [Army] Corps of Engineers that would initiate a comprehensive, rigorous [environmental impact statement] process."