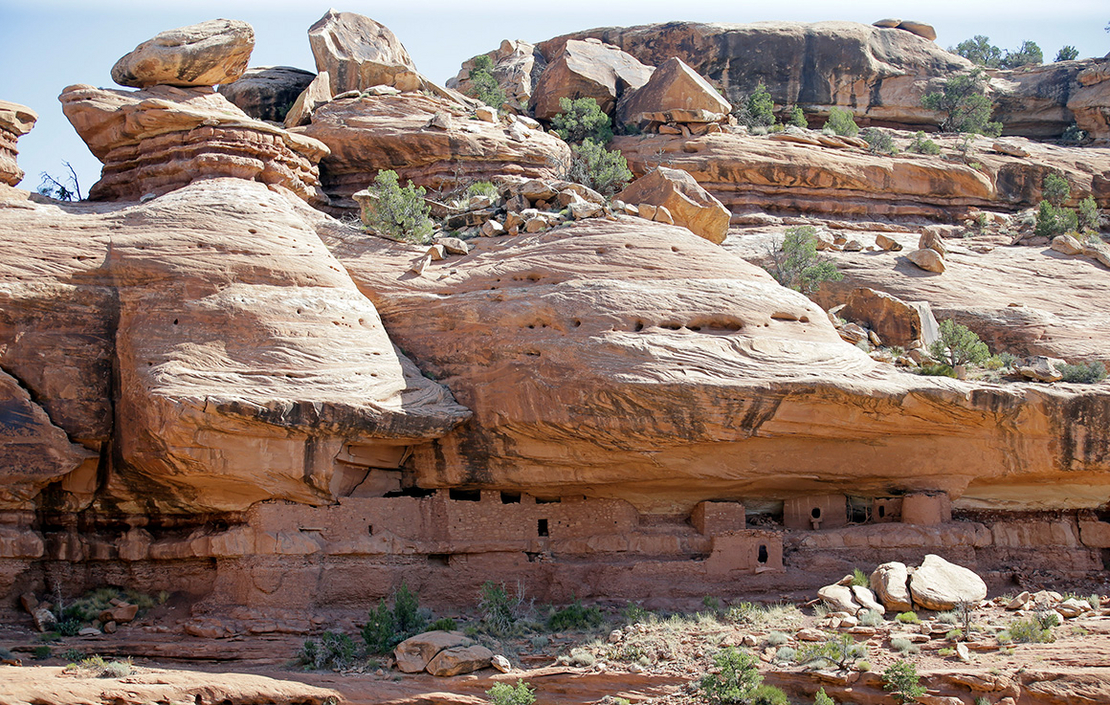 In a July 2016 file photo, the Moon House at Bears Ears National Monument is shown during a tour with then-Interior Secretary Sally Jewel. Rick Bowmer/AP Photo

Utah state officials are threatening new legal challenges over President Biden’s restoration of more than 2 million acres of public lands to a pair of national monuments in the Beehive State, potentially setting up an eventual Supreme Court review of a key conservation law.

The action drew sharp criticism from Utah’s congressional delegation and state lawmakers, including Gov. Spencer Cox (R), who have long criticized the monuments as the epitome of federal government overreach. They had successfully lobbied then-President Trump to scale back the sites.

"We think this is definitely an abuse of power of the Antiquities Act," Holyoak said, referring to the 1906 law that allows presidents to set aside existing public lands as monuments to protect areas of cultural, scientific or historic interest.

She added: "Under the Antiquities Act, it has to be limited to the smallest area compatible with the proper care and management of these structures."

Republicans seized on that language to argue the Bears Ears site — which President Obama set at 1.35 million acres when he established it in late 2016 — was unnecessarily large.

State and congressional lawmakers successfully lobbied Trump to shrink that southeastern Utah monument to about 202,000 acres.

Biden’s proclamation restores the monument’s original acreage and retains another 11,200 acres added by Trump, setting the site at 1.36 million acres.

Although some legal observers suggest Utah would be unlikely to prevail in a lawsuit challenging the monument’s size, Cox has seized on remarks Chief Justice John Roberts made earlier this year to argue otherwise (E&E News PM, Oct. 7).

Roberts suggested the Supreme Court could take a fresh look at the Antiquities Act, in particular precedent that has favored presidential authority to set the size of monuments without limits. That precedent dates back to 1920 on a challenge to what was then the Grand Canyon National Monument (Greenwire, March 24).

"Somewhere along the line, however, this restriction has ceased to pose any meaningful restraint," Roberts wrote in March. "A statute permitting the President in his sole discretion to designate as monuments ‘landmarks,’ ‘structures,’ AND ‘objects’ — along with the smallest area of land compatible with their management — has been transformed into a power without any discernible limit to set aside vast and amorphous expanses of terrain above and below the sea."

But University of Colorado Law School professor Mark Squillace, who specializes in natural resources law, suggested the Supreme Court may ultimately opt out of the fight.

"It’s pretty unlikely that the Supreme Court is going to tackle this case," Squillace said, adding: "The circuit courts have been pretty consistent in upholding the president’s authority in all these cases."

He added: "Despite Roberts’ comments, the sort of justification for protecting cultural landscapes — particularly in the case of Bears Ears — is really strong and powerful."

In the meantime, lawsuits challenging Trump’s use of the Antiquities Act to reduce both Bears Ears and Grand Staircase-Escalante national monuments remain pending in the U.S. District Court for the District of Columbia.

After Trump ordered new boundaries for the monuments in 2017, environmentalists and Native American tribes filed lawsuits arguing the law doesn’t give presidents the ability to reduce or eliminate existing national monuments. Only Congress has that power, they said.

Late last month, Chutkan administratively closed the cases, which removes the lawsuits from the court’s active docket but does not equate to a dismissal.

Plaintiffs and defendants in the case, who must still file regular status reports, must ask for the lawsuits to be returned to active status before the cases can be formally closed.

Although Biden referenced the lawsuits in his new proclamations for both the Bears Ears and Grand Staircase-Escalante monuments, he did not directly address whether Trump violated the law in reducing the sites.

Instead, Biden noted that Trump’s own proclamation removed "protection from objects of historic and scientific interest" across both sites, including "some objects" specifically identified in the original proclamations for each monument.

Squillace, the author of an amicus brief in the Grand Staircase-Escalante monument lawsuit, said he had hoped to see the White House release a new legal opinion from either the solicitor general or the Office of Legal Counsel at the Justice Department, in conjunction with the new proclamations.

"I’m a little frustrated by the lack of a clear opinion," Squillace said. "I would have liked to see more discussion about the legality of what Trump had done."

Squillace said he remains concerned that the monuments will continue to shrink and expand each time control of the White House changes hands.

"You can’t go back and forth on these things. That’s just not a good way to manage public lands," he added.

Interior Secretary Deb Haaland also noted the pending lawsuits in her private recommendations to Biden earlier this year, but characterized them only as "unprecedented."

Still, Haaland pointed to a 1938 opinion from then-Attorney General Homer Cummings that found that a president may not revoke a monument, although it did not address lesser modifications.

"Multiple pending lawsuits challenging President Trump’s modifications … raise serious and fundamental questions as to whether a President has authority to reduce boundaries or reduce core protections in a way that is tantamount to revocation of the monument," Haaland wrote in the report, which Interior publicly released Friday.

"It’s a big question mark," Desormeau said, noting that the cases could remain mothballed while the Bureau of Land Management and Forest Service work out new management plans for the sites.

Potential disputes after those management plans are completed — on issues like mining claims made after Trump diminished monument boundaries — could trigger the cases to restart.

Still, Desormeau said she is not concerned that a new lawsuit from Utah over the monuments could imperil the sites.

"I look forward to the chance to defend them if we get there, because they absolutely merit Antiquities Act protection," she said.