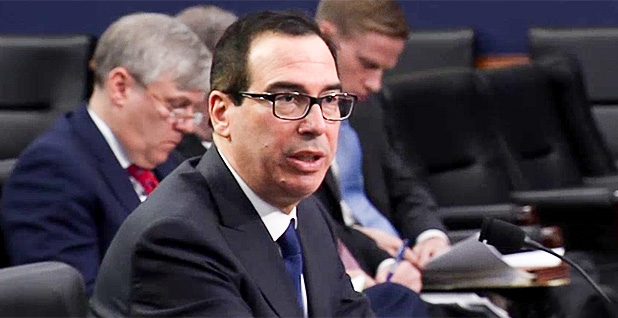 Energy interests and lawmakers from both parties are ratcheting up pressure on the White House as they look to tamp down President Trump’s threat to slap broad tariffs on steel and aluminum imports.

Those concerns were galvanized last night by the revelation that Gary Cohn, Trump’s chief economic adviser and leading opponent of the proposed tariffs, is preparing to step down.

On Capitol Hill yesterday, Senate Majority Leader Mitch McConnell (R-Ky.) in his first public comments on the issue acknowledged the mounting concerns within his caucus.

"There is a lot of concern among Republican senators that this could metastasize into a larger trade war, and many of our members are discussing with the administration just how broad, how sweeping, this might be," McConnell told reporters. "And there’s a high level of concern about interfering with what appears to be an economy that is taking off in every respect."

"It seems initially it’s not well targeted, it seems to have a greater negative effect on Canada and Europe than on China," Schumer told reporters.

"The smarter way to go is to make it more surgical or more targeted," he told reporters.

Senate Finance Chairman Orrin Hatch (R-Utah) put pen to paper over his concerns, telling Trump in a letter that the proposed tariffs "would not be paid by foreign steel and aluminum manufacturers."

"Instead, they would be paid by American manufacturers and consumers that rely on steel and aluminum," Hatch wrote.

"As usual," the president "has pursued it in a very ham-handed way, giving great concern to our allies and friends" around the world, Hoyer told reporters.

Treasury Secretary Steven Mnuchin got an earful on the subject from members of both parties in an appearance before House appropriators, where he said Canada and Mexico would be exempt from tariffs if a new North American Free Trade Agreement is agreed to.

"In the case of Canada and Mexico, our objective is to have a new NAFTA, and once we do that, the tariffs won’t apply to them," Mnuchin told members of the House Financial Services and General Government Appropriations Subcommittee.

While anxiety grows on Capitol Hill, the energy sector is calling for protections if the White House does move forward.

A coalition of the United States’ largest oil and gas pipeline lobbies in a joint letter yesterday called on Trump to make exemptions for energy-related steel.

"While we discourage you from imposing steel tariffs, we urge you at least to allow exemptions when steel products needed for energy production, processing, refining, transportation, and distribution are not sufficiently available in domestic markets," wrote the industry groups. "Doing no less will threaten American energy workers and consumers."

Industry sources eager to take part in a meeting Cohn was reportedly planning at the White House to discuss the tariffs quickly learned yesterday the Wall Street veteran was leaving.

And yet Trump continues to downplay reports of internal chaos within the administration. Cohn, according to the White House, had been discussing his departure with the president for weeks as it was near his time to transition out. Cohn is expected to leave in the coming weeks.

"Will be making a decision soon on the appointment of new Chief Economic Advisor. Many people wanting the job — will choose wisely!" the president tweeted last night.

The administration is also facing pushback from major GOP donors like Dan Eberhart, CEO of oil field service company Canary LLC, who warned the president Monday that a threat of punitive tariffs is already rattling the steel markets.

Canary imports steel to manufacture parts and specialty equipment in its wellhead installation and fracking services.

"The nationalists have won this round," Eberhart said in a statement. "I just hope the president takes a targeted approach to resolve trade disputes with China and avoids any potential unintended consequences that could deal a blow to our nation’s energy dominance goals."

When asked about the growing chorus of concerns yesterday, Trump told reporters at a joint press conference with the Prime Minister of Sweden he plans to move forward.

"We’ll do it in a very loving way. A loving, loving way. They’ll like us better," Trump said. "And they will respect us much more."

Sen. Bill Cassidy (R-La.), a Finance Committee member who recently met with Trump on trade issues, said he was concerned by the president’s trade positions but suggested they were part of a negotiating strategy.

"Obviously you can imagine if he’s negotiating, he may start off with a forward position and then retreat," Cassidy told E&E News yesterday.

But Cassidy also noted he has heard the concerns from industry at home about rising domestic steel prices and a lack of supply.

"We have a lot of end users of steel in our state, both in oil and gas production and in manufacturing, the building of plants, etc.," Cassidy said. "And if they can’t get steel, it’s going to limit economic activity. And so it’s not just the price, it’s that you can’t get it. So we have to be careful about that, and hopefully the president gets that."

Sen. John Kennedy (R-La.) also told reporters that he believes Trump’s tough words are strategic. "Before we get all lubed up about this, we ought to wait and see what the president does," he said.