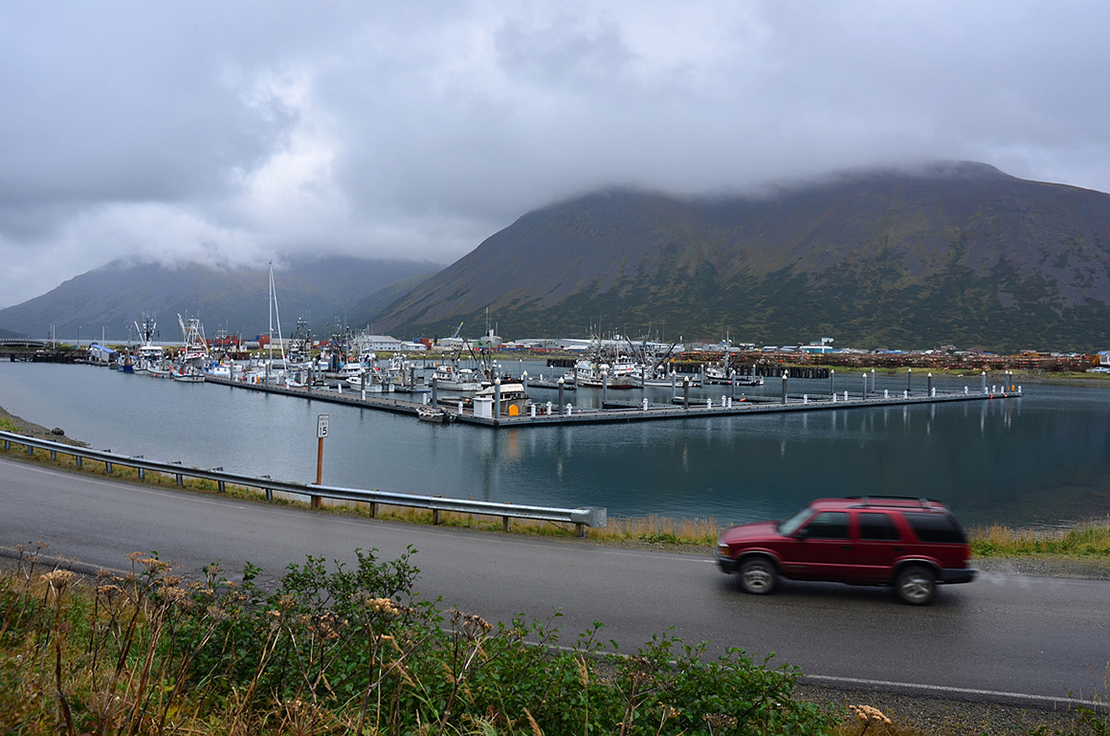 A driver in 2013 passing the small boat harbor in King Cove, Alaska. The small community has long sought a road to an all-weather airport in Cold Bay that would cut through the Izembek National Wildlife Refuge. James Brooks/Kodiak Daily Mirror/AP Photo

A federal appeals court today upheld the Trump-era approval of a land exchange agreement that could lead to the construction of a hotly contested road through congressionally designated wilderness within Alaska’s Izembek National Wildlife Refuge.

In doing so, a three-judge panel of the 9th U.S. Circuit Court of Appeals decided 2-1 to reject a district court’s 2020 ruling that former Interior Secretary David Bernhardt violated federal law when he approved the land swap. The agreement would trade property owned by King Cove Corp., an Alaska Native corporation, for acreage within the refuge that could be used to build a 12-mile-long gravel road.

Instead, the panel ruled that Bernhardt’s 2019 land swap decision “was correct” and did not violate the Administrative Procedure Act or the Alaska National Interest Lands Conservation Act (ANILCA), the 1980 law that established the wildlife refuge.

“Congress gave the Secretary discretion to strike an appropriate balance between environmental interests and ‘economic and social needs,'” wrote Judge Eric Miller, who authored the majority opinion on behalf of fellow Judge Bridget Bade. “The panel held that Secretary Bernhardt exercised that discretion when he found that, without a road, the economic and social needs of the people of King Cove would not be adequately met.”

Miller and Bade were both nominated to the appeals panel by former President Trump.

Judge Kim McLane Wardlaw, a Clinton appointee, authored the dissenting opinion. She wrote that Bernhardt’s decision represented a “tectonic shift” in policy from a 2013 decision by Obama-era Interior Secretary Sally Jewell that concluded a road “would lead to significant degradation of irreplaceable ecological resources that would not be offset by the protection of other lands to be received under an exchange.”

She also concluded Bernhardt in his decision “failed to adequately justify DOI’s change of policy” as required by the Administrative Procedure Act. And she cautioned that Bernhardt’s land exchange agreement, unlike similar proposals in years past, would not “limit use of the road to health and safety purposes, nor does it prohibit commercial uses,” potentially opening up more legal issues.

Supporters have said for years that the gravel road is needed to allow the residents of the remote town of King Cove access to an all-weather airport in nearby Cold Bay, where residents in need of emergency medical help can be transported to hospitals as far away as Anchorage.

A coalition of environmental groups filed a federal lawsuit challenging the Bernhardt land exchange. They oppose the road, in part, because they say it would disturb important habitat for migratory birds like the emperor goose and black brant.

It’s not clear what happens next. The appeals court decision remands the ruling made nearly two years ago by Judge John Sedwick back to the U.S. District Court for the District of Alaska for further review (Greenwire, June 2, 2020).

Bridget Psarianos, an attorney for Trustees for Alaska, which filed the original 2019 lawsuit challenging the land exchange on behalf of nine environmental groups, said they are evaluating the decision and plan to keep fighting.

Today’s ruling would only clear the path for a land exchange and does not guarantee a road will actually be built within the wildlife refuge. A road would need a permit, requiring a separate analysis and review process.

In addition, Interior Secretary Deb Haaland has vowed to visit residents near the 300,000-acre refuge — located in the Aleutian Islands between the Bering Sea and Gulf of Alaska, roughly 600 miles southwest of Anchorage.

A planned visit by Haaland last fall was canceled due to Covid-19 concerns, and a new date for a visit has not yet been announced. Haaland could make an administrative decision reversing Bernhardt’s land swap.

But Trustees for Alaska issued a press release today blasting the appeals panel’s ruling, saying it “threatens the health of land, water, and wildlife in Izembek National Wildlife Refuge.”

Trustees for Alaska could ask for a formal rehearing of the case before a full nine-member panel of the 9th Circuit, though Psarianos said it would have to discuss that with its clients, and no decision has yet been made.

“This dangerous ruling allows an unelected Interior Secretary to overrule Congress by simply giving away lands designated as Wilderness,” Psarianos said in a statement.

“This is not about medical access. Other transportation options have been studied that will provide King Cove the medical access it seeks,” she added. “No, this is about commercial corporate interests and the disregard for the laws that protect our nation’s lands, waters, and wildlife.”

Sedwick, in his 2020 ruling, rejected Bernhardt’s reasoning for entering into the land exchange agreement, determining Bernhardt did not justify overturning Jewell’s 2013 decision that the road would harm one of the most ecologically important sections of the wildlife refuge.

Many assumed that President Biden’s Interior Department would drop the Trump-era appeal when he took office last year. Instead, the Justice Department advanced the appeal and last year filed a brief in support (E&E News PM, March 8, 2021).

During an online hearing before the appeals court panel last summer, DOJ Attorney Michael Gray argued that Sedwick erred in tossing the land swap agreement to allow a road through the refuge.

Gray told the appeals panel that the residents of King Cove “often face a perilous journey” to the Cold Bay airport during emergencies and that the road through Izembek “would make the journey less difficult” (Greenwire, Aug. 5, 2021).

“Secretary Bernhardt acknowledged the competing policy considerations,” as well as the fact that not building the road “would best protect the habitat and wildlife of the Izembek Refuge,” the judges wrote in their majority opinion.

“But after examining the most recent available information about alternatives to a road, Secretary Bernhardt concluded that the value of a road to the King Cove community outweighed the harm that it would cause to environmental interests,” they added. “The panel held that there was no reason to look beyond the valid justification that Secretary Bernhardt offered.”