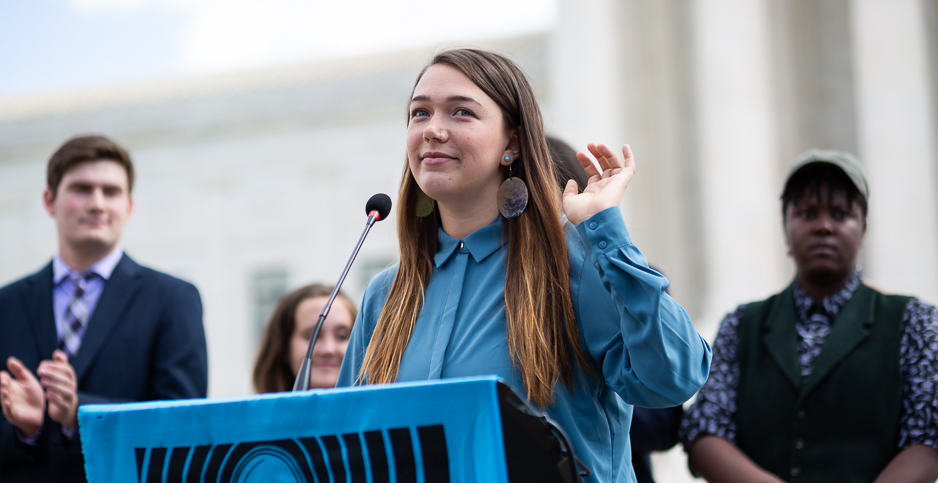 Kelsey Juliana, the lead plaintiff in the kids' climate lawsuit, speaks in front of the Supreme Court as co-plaintiffs and lawmakers watch Sept. 18, 2019. Francis Chung/E&E News

Judges for the 9th U.S. Circuit Court of Appeals "reluctantly" ruled in favor of the government in the kids’ climate case today, thwarting the young people’s historic legal fight while acknowledging the "increasingly rapid pace" of climate change.

The arguments presented by the 21 young people in Juliana v. United States proved too heavy a lift for Circuit Judges Mary Murguia and Andrew Hurwitz, who found that the kids failed to establish standing to sue.

"The central issue before us is whether, even assuming such a broad constitutional right exists, an Article III court can provide the plaintiffs the redress they seek — an order requiring the government to develop a plan to ‘phase out fossil fuel emissions and draw down excess atmospheric CO2,’" Hurwitz, an Obama appointee, wrote in an opinion issued this morning.

"Reluctantly, we conclude that such relief is beyond our constitutional power. Rather, the plaintiffs’ impressive case for redress must be presented to the political branches of government."

California District Judge Josephine Staton dissented, writing that the youths had a right to sue the government.

"Plaintiffs bring suit to enforce the most basic structural principle embedded in our system of ordered liberty: that the Constitution does not condone the Nation’s willful destruction," Staton, an Obama pick, wrote.

The panel moved to send the case back to district court for dismissal.

During June oral arguments in Portland, Ore., Assistant Attorney General Jeffrey Bossert Clark, head of the Justice Department’s Environment and Natural Resources Division, called the kids’ claims "a direct attack on the separation of powers" and insisted that the executive — not judicial — branch carries the authority to redress their grievances.

But Our Children’s Trust attorney Julia Olson, representing the youth plaintiffs, said the constitutional right to a safe, livable climate is an intrinsic part of rights to bodily integrity, personal security and family autonomy. She argued that the courts have a long history of stepping in to compel the government to take action when faced with cases of "catastrophic infringement" of human rights (Climatewire, June 5).

Ultimately, the 9th Circuit wasn’t willing to break the new ground presented by the kids’ arguments.

Juliana made it through multiple rounds of court proceedings prior to this appeal, including two at the Supreme Court. But it faltered in this most recent 9th Circuit bout — an interlocutory appeal by the government to have the kids’ case quashed before it reached trial.

Today’s decision blocks the kids’ suit from proceeding to the long-awaited "trial of the century" in the U.S. District Court for the District of Oregon, though the young plaintiffs could pursue reconsideration at the 9th Circuit and the Supreme Court.