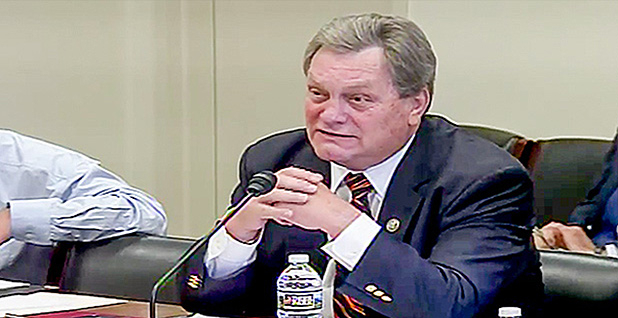 For members of Congress worried about the rising cost of forest fires, a tone of desperation may be settling in.

A sense of urgency — and unconventional thinking — around tackling wildfires on federal land were on display yesterday at a House Appropriations subcommittee hearing on the Forest Service budget.

Rep. Mike Simpson (R-Idaho), a senior appropriator, said he may try to block the agency’s practice of borrowing funds from other programs to fight the blazes.

And Rep. Marcy Kaptur (D-Ohio), whose state has one national forest, said she would be willing to engage one of progressives’ sworn enemies — investment bankers on Wall Street — in the effort to thin forests filled with dead wood ready to ignite.

"We’re not taking care of this problem for the country, we simply aren’t, and it’s not true to our heritage," Kaptur said.

"If we have to beg the private sector, go to Goldman Sachs and all these people that ripped off the people of the United States and beg the money, I’m willing to do it."

Behind the rhetoric is a crisis that’s only growing. Fire management used to account for less than one-fifth of the Forest Service’s budget but climbed to 50 percent a few years ago and is slated to consume 60 percent in the administration’s fiscal 2018 spending blueprint.

But the budget reflects decreased funding for removing hazardous fuels from forests, and a bad fire year could put the agency in a financial bind.

Limiting the Forest Service’s ability to borrow from other accounts would draw attention to the problem, said Simpson, who’s struggled to push through a more comprehensive bill to establish a disaster fund for wildfires.

Lawmakers without forests in their districts see the fires put out and they miss the budgeting implications, a frustrated Simpson said.

Blocking borrowing would change that, he said, by putting an emergency spending bill in front of Congress. "It would force the Forest Service to come to Congress for a supplemental, and then people would understand what the true costs of fighting these wildfires are," he said.

Such spending bills used to be an annual affair, but congressional interest has soured in recent years, with members seeing them as a sign of irresponsible budgeting.

Perdue urged lawmakers not to take that route.

"I hope that we will be able to prevail on your best choice, which is the fire budget, rather than the nuclear option of preclusion, because that would put the chief and us in a pretty untenable position having a fire," Perdue said.

But the energy package stumbled at the end of the year, in part because Congress ran out of time before adjourning. The measure would have treated wildfires similarly to tornadoes, floods and other natural disasters, helping the Forest Service plan for them, said a chief proponent, Sen. Steve Daines (R-Mont.).

"I think we got awfully close in the last Congress," Daines told E&E News. "We’re getting closer every Congress."

The legislation could also boost timber production, an issue pro-timber lawmakers pressed at the hearing. In some areas, timber sales by the Forest Service are barely 15 percent of what regulations allow, said Rep. Evan Jenkins (R-W.Va.).

"Good neighbor" authority in the 2014 farm bill is helping increase timber harvests in some places by encouraging work with nonfederal partners, Tidwell said. But Perdue said he’s not fully satisfied.

"These are not good statistics here," Perdue said. "These are crops. Those are crops there that ought to be harvested for the benefit of the American public."