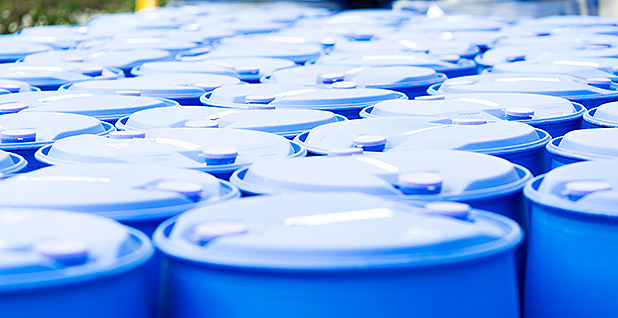 House appropriators are quietly urging the Trump administration to abandon proposed U.S. EPA regulations that would ban certain uses of three dangerous chemicals and restrict the number of hazardous waste reviews done by the Department of Health and Human Services.

And six months ago, the agency proposed bans on MC and NMP for most commercial paint and coating-removal applications. MC is a suspected carcinogen and NMP has been linked to dozens of deaths from acute exposure (Greenwire, Jan. 13).

The solvent rulemakings were prioritized by the Toxic Substances Control Act update that was signed into law last June. A provision of the law — named in honor of the late Sen. Frank Lautenberg (D-N.J.) — said the EPA "administrator may publish proposed and final rules" for chemical substances with completed risk assessments.

EPA determined in June 2014 that there are "cancer risk concerns and short-term and long-term non-cancer risks for workers and occupational bystanders at small commercial degreasing facilities and dry cleaning facilities that use TCE-based solvents and spotting agents."

The following year, it reached a similar conclusion for MC and warned that NMP could produce "adverse reproductive and other systemic effects" to people using the paint stripper.

But in a report accompanying the Interior-EPA appropriations bill that is poised to clear the House Appropriations Committee today, lawmakers urge EPA to abandon those draft regulations.

"Rather than continuing with those rulemakings, the Committee encourages EPA to consider those chemical uses as part of the risk evaluation process for the ten priority compounds recently designated by EPA," the 178-page report says.

EPA doesn’t have to comply with appropriators’ suggestions, but it gives them significant weight since the lawmakers behind them control the agency’s purse.

Under the reformed chemicals law, TCE, MC and NMP are set to receive comprehensive reviews of all their commercial uses — not just the ones EPA has already determined are harmful to human health and proposed to restrict (E&E News PM, Nov. 29, 2016).

"The notion that we are going to force the agency to start over, ignore these risks and put them into a process that’s going to take years to complete is an abdication of the agency’s responsibility, if this were to go through," said Richard Denison, lead senior scientist at the Environmental Defense Fund.

The EDF scientist noted that three months ago, a 21-year-old worker in Tennessee died while refinishing a bathtub. Although the death of Kevin Hartley is being investigated by state labor regulators, acute MC exposure is believed to be to blame.

"The House is now telling the agency, ‘Forget about that risk and defer any possible action on this chemical for years into the future,’" Denison said. "It’s one more example of private interests trumping public health protections of the most basic sort."

But the Halogenated Solvents Industry Alliance "believes that EPA should consider whether to regulate methylene chloride paint strippers and specific TCE applications under the new Lautenberg Act," said Faye Graul, the trade group’s executive director. "EPA should look at the risk assessment of our mission chemicals in total."

The alliance has urged EPA to abandon the rulemakings in its comments on the proposals and in letters to the agency’s rule-cutting task force.

The Interior-EPA bill would also limit the number of reviews of contaminants at hazardous waste sites that HHS’s Agency for Toxic Substances and Disease Registry could complete next year.

"None of the funds appropriated under this heading shall be available for ATSDR to issue in excess of 40 toxicological profiles," the bill says.

Chris Portier, who led ATSDR from 2010 until he retired in 2013, said the provision appears to be part of the push by this administration and Congress "to limit the amount of regulatory material … that could have impacts" on industry.

"Practically," he added, "it makes no sense because it really has no impact."

Portier, who now works part time for EDF, said that under his leadership, the agency managed to produce around 10 toxicological profiles per year. Still, he was surprised to hear that appropriators were targeting his former agency.

"I don’t recall a time when we got any direction from Congress," he said. ATSDR is "somewhat noncontroversial. They go into communities and help them to understand what to do with Superfund sites."

Portier explained that the "the tox profiles that they’re talking about [in the bill] are used to guide their decision about whether to act in a community to remove the exposure or not. And then it becomes the responsibility of EPA to actually clean up the mess."