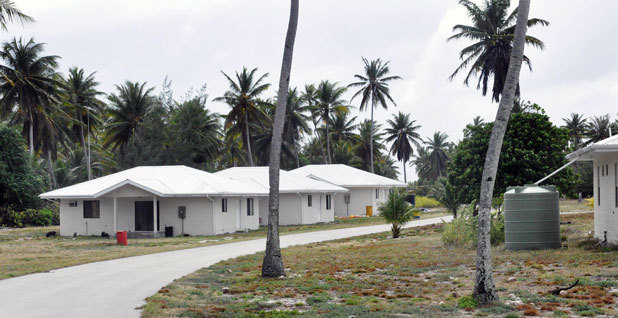 This 2014 photo shows the homes built under a resettlement plan for Rongelap Atoll. The atoll’s mayor hopes aquaculture will draw residents back decades after contamination from U.S. nuclear tests. Photo courtesy of AP Images.

Sixty years ago, the children of Rongelap Atoll played in what they thought was snow.

Their parents only later found out that it was radioactive debris, the dust of vaporized coral from the largest of the nuclear tests the U.S. government was conducting in the Marshall Islands. Castle Bravo was 1,000 times as powerful as the bombs used on Hiroshima and Nagasaki, and it caused the entire population of Rongelap to relocate.

Now Rongelap is poised to jump-start an aquaculture industry.

The vision is ambitious. Where once contamination drove residents away, dozens of cages would house the Pacific threadfin that Hawaii covets. The native population would move back to raise the reef fish, also called moi, in the vast lagoon at the center of Rongelap’s 61 islands.

James Matayoshi, the mayor of Rongelap Atoll Local Government, believes that aquaculture is the key to motivating people to move back. The government — using a $45 million trust fund from the United States — has cleaned up one island and built up its infrastructure.

"We’re at that point now we’re trying to resettle the community, but one of the missing components instead of building bricks and mortars is creating incentive through economic development initiatives," Matayoshi said during a recent visit to Washington, D.C. "We believe that when you create job opportunities through certain industries, it’ll create an incentive for people to have a more promising commitment to resettle."

So far, his plan seems poised to succeed. A pilot project in Majuro, the capital of the Marshall Islands, showed that the island nation could effectively raise moi. A new company called Aquaculture Technologies of the Marshall Islands (ATMI) now has six cages, and officials say they have lined up four potential buyers for the first harvest this July.

Armed with a new $1.8 million grant from the U.S. Agency for International Development, the company will soon add 10 more cages, four in Rongelap. A pending application for a $100,000 grant from the Interior Department could bring the total cages up to 20.

In a recent interview, Matayoshi and Rogelap legal counselor John Masek spoke about the project with barely contained enthusiasm. Since its independence, the Marshall Islands has largely depended on the U.S. aid, with little success in creating sustainable industries.

Could aquaculture change the equation?

"The U.S. really invested a lot of money in many projects in the islands," Matayoshi said. "Every time we come to D.C., they see us as, ‘Oh another failure, oh please go away.’ But now they’re turning around and saying, ‘Mayor, we think you may have really something unique.’"

The Republic of the Marshall Islands is about 2,500 miles west of Hawaii, in what Masek calls the "sweet spot" — or a place so remote that almost no one visits.

Only 60,000 people live on its islands, which constitute 70 square miles of land in the middle of 700,000 square miles of ocean. Just flying from Majuro to Honolulu can cost upward of $1,500 round trip.

Over the past few decades, a series of commercial ventures have failed. China tried to set up garment factories in the 1990s. Agriculture has never moved far past subsistence. Commercial fishing boats remain foreigner-owned. Tourism is sparse. Most of the nation’s gross domestic product is U.S. aid.

But with aquaculture, the Rongelap government thinks the Marshall Islands finally have a competitive advantage.

Dozens of islands create lagoons of calm water akin to vast swimming pools — allowing cages to bob on the surface, making it possible to clean them with "two kids, masks and snorkels," in Masek’s view.

Currents constantly wash away food waste that can otherwise cause algae growth on the ocean floor. Fish feed comes from the bycatch of the Pacific tuna fleet, which hands over some of its discards to ATMI’s sister company, Island Feed Inc.

"Usually in our part of the world, transportation is what kills you," Masek said. But "we’re a trans-shipment point for the tuna fleet. They’re already shipping fresh tuna out every week. They’re shipping it by plane and by boat."

The United States is also beginning to look at aquaculture as a solution to the overharvesting of the ocean’s resources (Greenwire, Nov. 20, 2014).

Wild-caught fish cannot sustain a growing population; already, the vast majority of the United States’ seafood is imported, half of which is farmed.

How that plays into the Marshall Islands’ venture is unclear. The project has received about $2 million in funding from U.S. agencies, including the upcoming $1.8 million from USAID. Rongelap’s government also hopes to receive a $100,000 technical assistant grant for sea cages from Interior’s Office of Insular Affairs and a $300,000 eco-development administration grant from the Commerce Department.

Fish farmed in the Marshall Islands could end up in Hawaii, where moi is known as the "fish of kings" because it was once farmed for local royalty. The reef fish is popular in Hawaii, where the flaky white flesh can be prepared many ways, from raw to grilled.

July’s sale will test the commercial viability of Marshall Islands aquaculture. Masek said the government expects to sell between 16,000 and 25,000 pounds of moi from the cages off Majuro, at between $4 and $5 a pound. Buyers then must figure out how to best ship the fish for sale elsewhere.

If all goes well, ATMI — of which the Rongelap government is the largest shareholder — hopes to attract venture capitalists willing to increase production.

Years from now, Matayoshi sees a repopulated Rongelap, with residents who own their own moi cages in the atoll’s lagoon. The industry would support a local economy to match the houses, runway, power system and other facilities recently built on the atoll’s main island.

It’s a tall order: in the past, Rongelap’s native population has expressed uncertainty about moving back to a place they associate with radiation sickness and lasting health problems.

Distrust remains from the days and years after Castle Bravo, when residents enlisted Greenpeace to relocate them after the U.S. government denied lasting contamination. Fewer than 40 people currently live there, mostly made up of construction workers and their families.

But Matayoshi insists the main island is free of contamination and ready to repopulate. The lagoon, he said, is ideal for fin fish aquaculture, with no development and almost unlimited expansion possibilities in 230 miles of water.

"We want to be independent," Matayoshi said. "We want to be a sustaining venture and really change the GDP of the Marshall Islands. We want to make it so dramatic that it becomes one of the main assets."