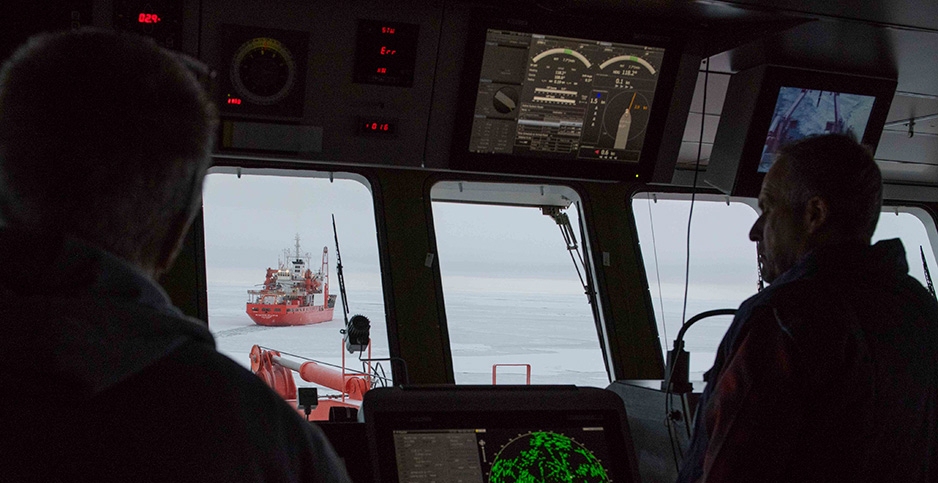 Akademik Fedorov as seen from Polarstern. The two ships reunited this week as the MOSAiC Expedition searched for the right Arctic ice floe in which to anchor the Polarstern for a year. Esther Horvath/@MOSAiCArctic/Twitter

ON BOARD AKADEMIK FEDOROV, Barents Sea — In a remote corner of the central Arctic, just a few hundred miles from the North Pole, a single drifting ice floe is having a historic moment.

Leaders of the MOSAiC Arctic expedition have selected an ice floe to serve as the mission’s primary science station and home base for its main research vessel, German icebreaker Polarstern, for the next year.

Today the Polarstern will attempt to moor itself to the floe without damaging it — the last litmus test that will confirm the site. If it’s successful, the setting-up phase can begin.

At the same time, MOSAiC scientists are investigating suitable sites for additional, secondary science stations — a "distributed network" of smaller sites scattered throughout the sea. They will provide supporting data to complement the central ice camp.

The researchers here are in a race against time to make their decisions and set up the ice camps. Daylight hours, essential for working with heavy scientific equipment, are vanishing by the day in the central Arctic. Weather conditions are often unpredictable, and entire working days can be lost to inclement conditions.

"It’s the multiplication, the cross section between the rapidly diminishing daylight hours and the weather windows, that just make it so hard," said Tim Stanton, a researcher at the Naval Postgraduate School and head of the distributed network activities.

Meanwhile, Akademik Fedorov — the Russian support vessel charged with setting up the distributed network — is only chartered through the end of the month. It must complete its mission with enough time to journey back to its launching point in Norway by Oct. 31.

The main ice floe is the linchpin of MOSAiC’s unique expedition. As the temperature drops and the Arctic winter sets in, the surrounding ice will thicken around the Polarstern and freeze it into place. It will spend the next year locked in position, collecting data on the complex central Arctic climate system as it drifts across the ocean with the ice.

This ambitious design will allow expedition participants — including hundreds of scientists from all over the world — an unprecedented window into the intricate inner workings of the Arctic climate. It’s the first time researches will be able to make continuous observations on a year-round basis in the central Arctic, where months of winter darkness and thick sea ice make access difficult and dangerous.

These observations will help scientists better understand the ongoing response of the rapidly warming Arctic to climate change. And in turn, better insight into the Arctic climate may help scientists make better projections about the effects of global warming all over the world.

MOSAiC’s enterprising strategy was carefully designed with these kinds of scientific breakthroughs in mind. But executing the plan has been easier said than done.

The perfect ice floe must have certain characteristics to be suitable for the mission. It must be large enough, thick enough and stable enough to support all the heavy equipment researchers brought along.

The expedition leaders have been looking for a site that’s a minimum of about 5 square kilometers in size and around a meter thick, according to Thomas Krumpen, one of MOSAiC’s science leaders.

They also have a specific goal for the Polarstern’s drift path across the Arctic Ocean. Ultimately, it should enter a kind of Arctic ice current known as the transpirar drift, which will carry it through the central Arctic and release it next October somewhere between Greenland and Svalbard in a region known as the Fram Strait.

To have a good chance of sticking with this trajectory, the ice floe must start out in a specific region of the Arctic Ocean, narrowing down the list of places the expedition can hunt for a suitable floe.

Expedition leaders armed themselves with satellite data on Arctic ice cover before setting sail from Norway on Sept. 20. These images helped them identify the most promising locations to begin their search.

But final confirmation of a floe’s thickness and strength is best made with on-site observations. Experts from both the Polarstern and Akademik Fedorov have been conducting ice surveys for days, both by helicopter and on the ice, using special electromagnetic sensors and drilling equipment.

They investigated multiple floes at multiple locations over the past week, with growing urgency as the days passed. Most sites were too thin or too unstable to be considered.

It’s a problem that may not have existed several decades ago. As the Arctic climate has warmed, its sea ice coverage has dramatically declined, and much of the older, thicker ice has begun to disappear.

Now, experts on the Polarstern have finally identified a promising site. It’s a mass of ice about 9 kilometers square with a chunky centerpiece about 4 meters thick, stable enough to support heavy equipment.

The announcement was met with applause at a general meeting on Akademik Fedorov earlier this week.

"It’s a hidden treasure," Krumpen said as he broke the news. "And I must say that we can be quite lucky that something like this was discovered."