Are highway rights of way an answer to power siting dilemma? 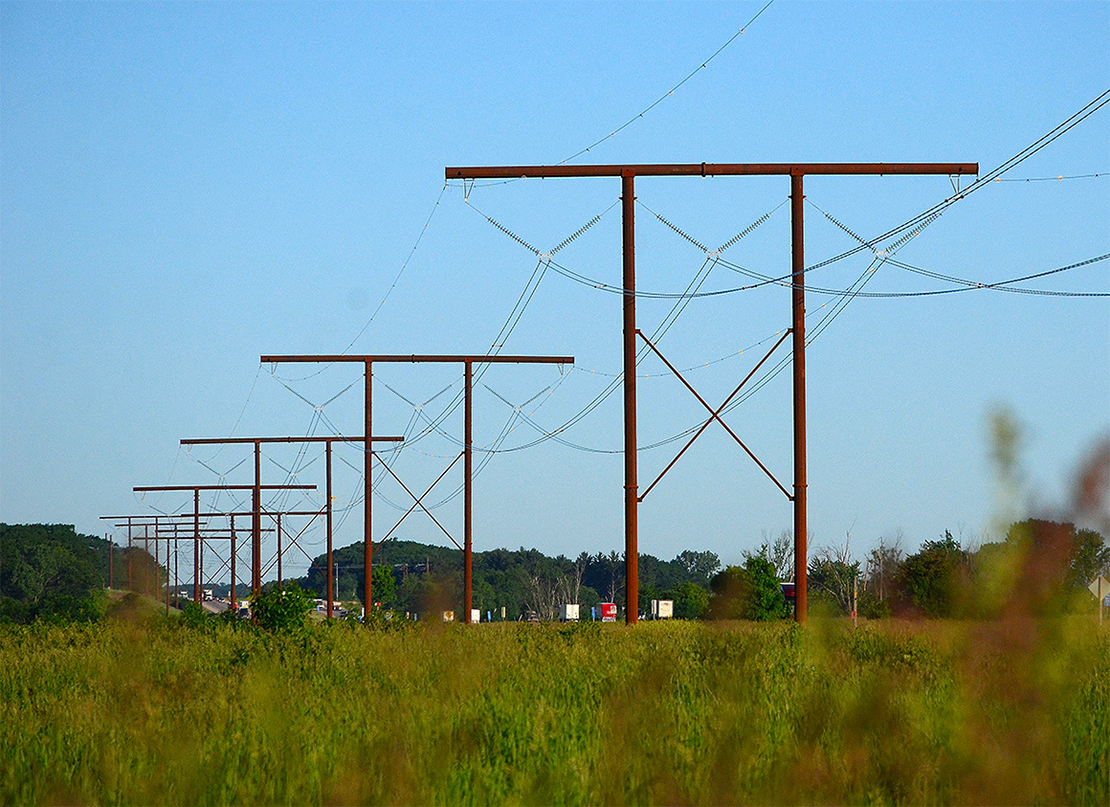 The 180-mile Badger Coulee transmission line in Wisconsin is an example of a high-voltage power line located within a highway right of way. A new study cited benefits to burying high-voltage, direct current transmission lines and fiber-optic lines along highways and interstates. American Transmission Co.

Could a key to unlocking a cleaner, more durable power grid and furthering the adoption of electric vehicles be found in vacant strips of land alongside highways and interstates?

The answer may be yes, and it’s a concept that’s gaining momentum across the country, according to a feasibility study done for the Minnesota Department of Transportation.

The study, released yesterday, was led by the Ray, an Atlanta-based transportation nonprofit, and Seattle-based NGI Consulting, and shows multiple benefits for co-locating high-voltage, direct current (HVDC) transmission and broadband underground along highway rights of way

The analysis focused on Minnesota but was expanded to include a broader set of findings that outline the “national” benefits of using existing highway rights of way for siting transmission and communication infrastructure. Among the benefits identified: more than $1 billion in societal value from faster grid decarbonization that would be possible per interregional transmission project.

The study also said underground HVDC transmission can be built at a cost comparable, on a capacity basis, to much of the 345-kilovolt alternating current (AC) transmission that has been built across the country. It’s a view not shared universally in the transmission industry, and cost is often cited as an obstacle to burying high-voltage power lines.

But transmission developers in the United States and Europe, including SOO Green HVDC Link LLC, a project being developed in the Midwest, are already siting HVDC lines underground in existing transportation rights of way. And the Biden administration has helped with guidance and funding to help states embrace the concept of using rail and highway easements.

NGI founder Morgan Putnam, one of the study’s authors, said the barriers in the way of next-generation highways are ones that states can overcome. “It’s really just a question of ‘Do we have the will?’ And where there’s a will, there’s a way.”

Interest in Minnesota picked up in 2020 with the establishment of a state advisory council to help reduce transportation sector carbon emissions. The council recommended that the Minnesota DOT take a further look at the potential for burying transmission and communications lines along highways.

The new 81-page feasibility study made more than a dozen findings specific to Minnesota and related to enabling the co-location of burying communications and transmission infrastructure along roadway rights of way. The report identified challenges as well as steps to overcome them.

Jessica Oh, strategic partnerships director for the sustainability and public health team at the Minnesota DOT, said the department’s primary interest wasn’t focused on transmission and the grid. It was more focused on future needs of the transportation system in light of emerging trends.

“We really were trying to be strategic about aligning so many of these future and emerging technology interests and these future uses of right of way,” Oh said in an interview.

“We really were trying to be strategic about aligning so many of these future and emerging technology interests and these future uses of right of way.”

The study identified some clear barriers to siting broadband or electric transmission along highways — including that Minnesota law doesn’t allow longitudinal utility siting in highway rights of way, so a policy change would be needed.

The DOT must also ensure that non-transportation infrastructure located in highway easements doesn’t interfere with the ability to maintain and expand roadways.

None of the challenges identified by the study have deterred the DOT’s interest in the concept, and a second phase is in the works later this year that will take a deeper dive some of the issues raised, Oh said. Along the way, additional state agencies, utilities and other parties need to be brought in to help with the analysis, she said.

While numerous policy and process barriers stand in the way of Minnesota burying power and communications lines in highway easements, Oh and the study authors agree that none are insurmountable. And for technical guidance, the state can look at its neighbor to the east, said Laura Rogers, deputy director for the Ray.

Wisconsin passed legislation almost 20 years ago that allows transmission to be built in highway rights of way. And the Badger Coulee transmission line, completed in 2018, is a product of that policy.

The 180-mile transmission line was built largely along the Interstate 90/Interstate 94 right of way. According to the study, developers American Transmission Co. and Xcel Energy Inc. worked with the Wisconsin Department of Transportation early in the development process to identify a rough corridor in which the line could be sited. And the DOT noted during the final siting process where highway maintenance, upgrades and expansion would affect the route.

“They have the playbook,” Rogers said. “They’ve done it. And they they’ve done a harder version, which is overhead [transmission].”

“We’ve spoken to quite a few of them [DOT partners] about this, and the response has been really good,” Rogers said. “But it seems as though everyone was waiting for the report to come out so that they could dig deeper and really understand with more clarity exactly what the vision is.”

An announcement from the White House also helped spur interest. Last April, the Department of Energy announced funding to help build high-voltage electric transmission, and the U.S. Department of Transportation issued guidance to enable the use of existing rights of way for power line siting.

Rogers plans to build a coalition of state DOTs, utilities and other interested groups to build on the momentum.

She’s encouraged by the trajectory of a similar initiative to encourage solar development in highway rights of way.

“Not even five years ago, everyone said, ‘We’re not going to put solar in the transportation right of way; that’s crazy. This is never going to be a thing.’ And we relentlessly pursued it,” Rogers said. “And now, you know, the Ray is helping 20 different transportation agencies analyze their rights of way, helping them look at the parcels, do the analysis, helping them through the procurement process. It is it is our most popular program.”

When it comes to buried transmission and communications infrastructure alongside highways, NGI’s Putnam said states will have different motivations for pursuing it, but he believes it’s a concept that will gain momentum after two or three states blaze the trail.

Some may want to bury transmission lines to accelerate renewable deployment. Others might want to avoid political backlash against overhead lines across private property. Others may see opportunity to expand rural broadband of prepare for the transition to EVs.