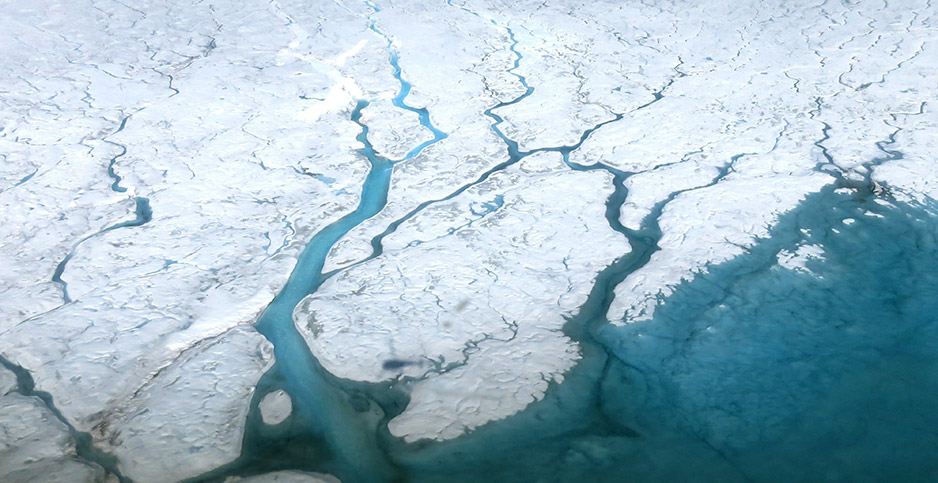 Scientists are studying the connections between melting Arctic ice and heat waves in the United States. NASA

U.S. cities are bracing for another summer of extreme heat, with temperatures already skyrocketing in some places. Multiple metropolitan areas in the West issued heat advisories last week as highs soared into the triple digits.

Even San Francisco, known for its mild weather, reached an eye-popping 100 degrees — an event reportedly unprecedented for the month of June.

Record-breaking heat waves are less and less surprising these days, and they’re expected to become increasingly commonplace in the coming years. As the climate continues to warm, models project that heat waves in many places around the world will become more intense.

It’s not just about rising temperatures, some scientists say. Climate change might be stirring up the planet’s air currents to increase the likelihood of heat waves in some places.

Increasingly, researchers are suggesting that these physical changes may be partly the result of rapid warming in the Arctic. The idea is still heavily debated among climate scientists, but it’s gaining attention as more and more researchers investigate the theory.

New research, published in the Journal of Geophysical Research: Atmospheres, has added to the mix.

Led by Dagmar Budikova of Illinois State University, the researchers point to a connection between U.S. heat waves and sea ice levels in the Hudson Bay, which is part of the Canadian Arctic.

During years when spring and summer sea ice extent is unusually low — often the case in abnormally warm years — heat waves become more common across certain parts of the country, the study suggests. Specifically, it finds that hot, humid heat waves increase across the Southeast, and hot, dry heat waves increase in the south-central states.

The study only demonstrates a statistical relationship — that is, when one event occurs, the other seems to follow. It doesn’t actually prove that the low sea ice is physically causing the heat waves, only that they tend to happen at the same time. But the researchers have some ideas about the mechanisms that may be at work behind the scenes.

At the heart of the theory is the idea that warming in the Arctic is changing the relationship between temperatures in the high latitudes and temperatures farther south toward the equator. Atmospheric temperatures have a significant effect on the way that air flows around the globe, and some scientists suggest that this shifting temperature gradient is affecting some major atmospheric circulation patterns.

In particular, many researchers have begun to suggest that Arctic warming may be altering the flow of the Northern Hemisphere jet streams — large, fast-flowing air currents that circle the globe — causing them to meander up and down as they flow around the Earth. A wavier jet stream can sometimes cause certain weather patterns to sit in one place for longer than they otherwise would, including the high-pressure systems that typically lead to heat waves.

Melting sea ice is one factor that can cause Arctic warming to become even more intense. As sea ice declines, it exposes more of the ocean’s surface to the sun, allowing the area to absorb more heat. As a result, some scientists suggest that even temporary changes in Arctic sea ice can have significant effects on the atmosphere, which may in turn have downstream consequences for the weather in other parts of the Northern Hemisphere.

"To me, the dynamics make sense," said study co-author Tom Ballinger of Texas State University. "That is, if you have warming taking place in the high latitudes and into the Arctic faster than in the midlatitudes, you would expect that the temperature, and therefore the pressure gradient, would be affected as a physical response. And so we’re seeing evidence of more persistent weather systems in the midlatitudes."

If the theory holds true, continued warming in the Arctic could cause an increase in certain types of severe weather events throughout the Northern Hemisphere. In addition to heat waves, scientists have also suggested links to long dry or rainy spells, severe winter weather in the U.S. and extreme cold in Siberia.

Understanding these connections could help scientists improve their projections about the kinds of climate and weather changes different parts of the world should expect in the future.

But while many studies have demonstrated statistical connections between Arctic warming, an erratic jet stream and severe weather, some scientists remain skeptical about the actual causes behind all of these events.

According to Trent Ford of Southern Illinois University, another co-author on the new study, there’s still debate about both the influence of the Arctic on the jet stream and about the jet stream’s influence on certain weather events.

For instance, while it’s widely agreed that the changing temperature gradient between the Arctic and the equator must have some effect on atmospheric circulation, some researchers have pointed out that climate change in the tropics may also be affecting the behavior of the jet stream. There’s disagreement about which is the dominant influence, and some scientists don’t believe that the Arctic plays such an important role.

And while it’s also widely agreed that the jet stream has a significant influence on weather patterns throughout the Northern Hemisphere, it’s not the only factor that affects them. Some researchers might argue it’s possible that other consequences of climate change, or even simple natural variations in the climate, could be bigger drivers of some of the changing weather patterns in places like the U.S. and Europe.

The new study begins to address this issue by looking at the possible influence of certain natural climate patterns, which are believed to have some influence on heat waves in the U.S. It finds that when those natural conditions shift, there’s still a statistical link between the heat waves and the Hudson Bay sea ice.

"That helps to strengthen the implication of some sort of connection there," Ford said.

Still, he added, the only way to really get at the actual causes would be to conduct a modeling study, a next step he says the research team hopes to pursue.

That said, mixed results from previous model simulations are one major contributor to the debate about Arctic linkages. While many observational studies have suggested statistical relationships between Arctic climate change and midlatitude weather patterns, models have not always been able to identify a physical reason for the connection — at least, not one that’s driven by Arctic climate change.

In an emailed comment to E&E News, climate scientist James Screen of the University of Exeter noted that previous modeling studies "have generally concluded that the midlatitude effects of Arctic sea-ice loss are weak, especially in summer."

Given the uncertainties in the scientific community and the limitations of the new study, he suggested that it’s "still too early to conclude that Arctic warming HAS influenced US heatwave frequency or if … it WILL significantly affect heatwaves in the future."

Some scientists have suggested that improving the model experiments used to investigate Arctic linkages, and standardizing certain methods involved in these studies, may help clear up some of the uncertainty. To that end, an international group of researchers is currently working together on a project known as the Polar Amplification Model Intercomparison Project, or PAMIP.

The project aims to develop a coordinated, standardized set of model experiments that will investigate the effects of Arctic climate change — including sea ice declines — on the rest of the world.

For now, though, the debate continues. But some researchers suggest that, even if the exact physical processes remain unclear, the concept of Arctic linkages is steadily gaining traction.

"I think the evidence keeps mounting in the direction of Arctic influence on the midlatitudes," Ballinger said. "So I definitely think that there is a connection."