Arid West starts dreaming about piping in water from afar 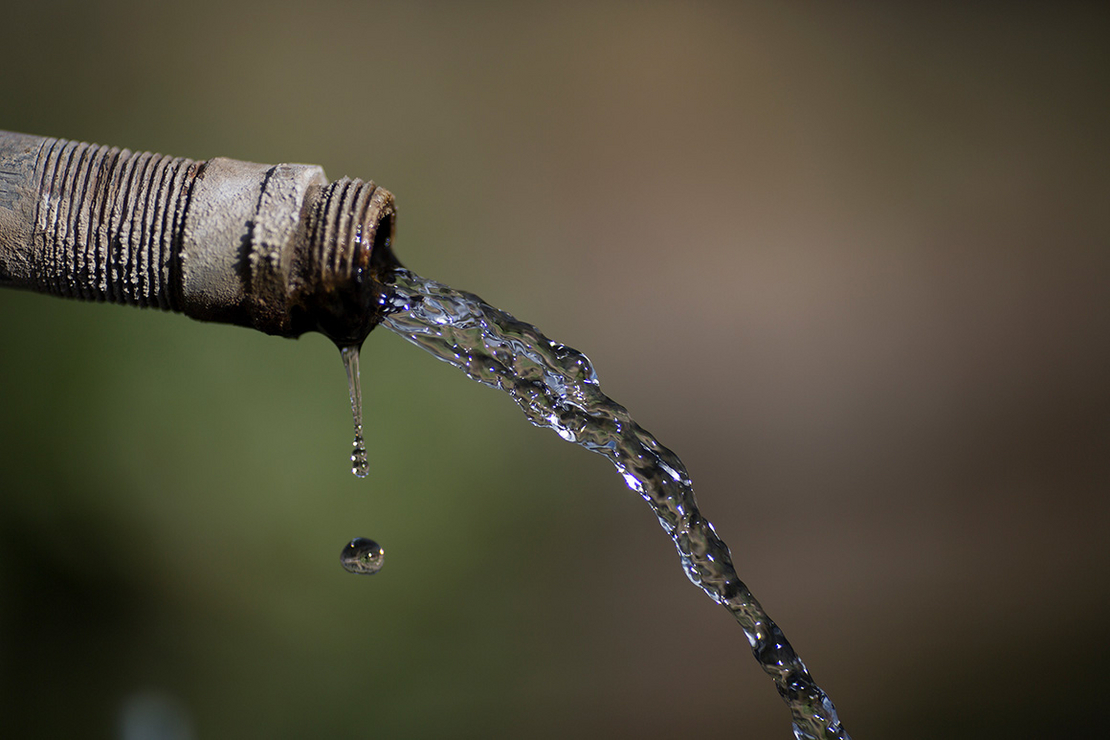 Water flows from a pipe connected to a spring on Frazier Mountain in Los Padres National Forest in 2015 near Frazier Park, Calif. David McNew/Getty Images

Even in the decades before the West plunged into a 22-year drought, the proposals to shift water from wetter states to more arid locations have never been in short supply.

There was the submarine pipeline from Alaska to California. Towing Antarctic icebergs to make up for shortfalls in drinking water supplies. A pipeline from Lake Superior to Wyoming.

And that one plan that more or less required an invasion of Canada.

But those proposals — whether well-planned or bordering on fantasy — have never managed to gain traction.

Despite that lack of success, as drought threatens key water supplies across the West like the Colorado River and Rio Grande basins, these ideas are again percolating. Could this period of rapidly increasing scarcity be the time when they’re more than just a mirage?

“It’s always possible that if a large population of the South and West really wants the water, instead of living sustainably, someday there might be a transfer of water,” asserts author Dave Dempsey, who serves as a policy adviser to FLOW, For Love of Water. The Traverse City, Mich.-based group is a law and policy center focused on the Great Lakes.

Earlier this year, Utah legislators approved a study of using the Pacific Ocean to refill the dwindling Great Salt Lake via pipeline. Dempsey likewise pointed to suggestions last year by an Idaho radio host who said the state should use its political influence to “borrow the Great Lakes.”

“People look at a map and see a lot of water and say, ‘Why can’t we have that?'” said Dempsey, who wrote “Great Lakes for Sale: From Whitecaps to Bottlecaps.”

Among the reasons why the ideas have foundered are legal issues — the Great Lakes states, for example, inked a compact in 2008 to protect their waters — and physical ones.

“It’s hard to come to the terms with the fact that there’s less water, and people want an easy fix,” explained John Fleck, director of the University of New Mexico’s Water Resources Program.

“The pipelines seem like an easy fix because the people who suggest the idea don’t understand the scale — the giant, mammoth scale — of meaningful quantities of water,” he added.

According to EPA, a typical family uses about 320 gallons of water daily, or about 1.3 tons of water by weight.

The University of Wyoming’s Tom Minckley, a professor of geology and geophysics, likewise pointed to the energy that would be required to move vast quantities of water uphill, typically on a trajectory toward the Continental Divide.

“In our modern world, energy is contributing to climate change. So how much energy is the carbon footprint of lifting water?” asked Minckley.

Minckley suggested the endless pipeline of pipeline ideas is spurred in part by the same ideology that last century prompted the U.S. government to harness the Colorado River.

In fact, the Bureau of Reclamation saw its heyday with the construction of the Hoover Dam and Lake Mead on the Colorado River, and later the Glen Canyon Dam erected to create Lake Powell (Greenwire, June 17).

The ideas “come from a place where people are in an area of scarcity and they see abundance elsewhere, and it’s just as simple as putting a straw out there and bringing it to us,” said Minckley, who led the 70-day Sesquicentennial Colorado River Exploring Expedition in 2019, marking the 150th anniversary of John Wesley Powell’s charting of the region.

“It’s a really simple idea to hold on to, but the mechanics of it are very difficult legally and physically,” he added, referring to complex water laws across the West, which dictate who owns water and how it can be used.

The costs of such projects are also likely to be prohibitive, between the energy required to move large amounts of water and the expense of building infrastructure: “I can’t imagine it ever pays for itself.”

From West Virginia to the West?

One of the earliest — and most bombastic — proposals for hydrating the West came from a Pasadena, Calif.-based engineering firm in the early 1960s, when it put forth plans for a “North American Water and Power Alliance.”

The massive project, which would have taken decades to complete, called for canals, tunnels and reservoirs to move water from Alaska and Canada to the Southwest and Mexico.

Author Marc Reisner noted in the epilogue to his book “Cadillac Desert” that the plan’s “main drawbacks are that it would largely destroy what is left of the natural West and it might require taking Canada by force.”

While the proposal largely died under its own weight, it would be followed by countless others.

In the early 1980s, the Powder River Coal Company proposed a pipeline to bring water from Lake Superior to Wyoming and then return to the Great Lakes via a pipeline containing coal slurry. The proposal failed after the company couldn’t obtain eminent domain for the construction.

Shortly after in 1982, the Army Corp of Engineers rejected a diversion to take Great Lakes waters and recharge the Ogallala Aquifer, which sits beneath the Great Plains.

The plan, at a cost of some $19.6 billion at the time, would have diverted water from Lake Superior into the Missouri River Basin.

In the 1990s, Alaska Gov. Walter Hickel proposed an underwater pipeline starting in his state — running as long as 2,100 miles and delivering some 4 million acre-feet of water each year — to parched Californians.

“The pipeline is a long-term solution to our water crisis and it is an idea whose time has come,” then-Los Angeles County Supervisor Kenneth Hahn wrote to the Los Angeles Times in a 1991 letter.

But a report from Congress’s Office of Technology Assessment the following year dismissed the idea as one of “the most complex and costly engineering projects ever attempted, rivaling (or surpassing) in scope the building of the Panama Canal, the Trans Alaska Pipeline or the Channel Tunnel.”

The same could be said for former Energy Secretary Bill Richardson caught the ire of Midwestern voters in 2007, when in an offhand remark on the campaign trail he suggested a national water summit to chart ways to funnel water to the West.

“Wisconsin is awash in water,” he told the Las Vegas Sun in the midst of his failed Democratic presidential primary bid.

But short time later, his press secretary issued an apology to the Livingston County Press, affirming the Democrat “in no way proposes federal transfers of water from one region of the nation to the other.”

Former Southern Nevada Water Authority General Manager Pat Mulroy was a vocal proponent of repurposing Mississippi River floodwaters to irrigate crops the Colorado River Basin, and then pull water that would have gone to agriculture to cities like Las Vegas.

“Yes, it makes great folklore to fight about water, but the future is not a battleground,” Mulroy told the U.S. Chamber of Commerce at a 2011 “Invest in Water” conference, reported by the Las Vegas Review-Journal.

Then there was the failed attempt by Star Trek icon William Shatner to crowdsource a $30 billion pipeline project to bring water from the Pacific Northwest to California.

Earlier this year, Senate Energy and Natural Resources Chair Joe Manchin (D-W.Va.) highlighted a proposal to build a pipeline from Kentucky’s Olmsted Dam, drawing from the Ohio River and sending water to the arid West.

“We’ve got to do something to make sure you have adequate water supply [in the West], and we’ve got an abundance of water on the East Coast,” Manchin said during a session focused on expanding hydropower energy production.

Manchin pointed in particular to a proposal from one his former constituents, Charlie Jones, the late scion of the marine services company Amherst Madison. Jones proposed that the federal government would pay states along the Ohio River for a percentage of their water.

“I’m sure the cost and all that would be high, but I just was wondering if the environmentalists would be opposed to a water pipeline,” Manchin said.

He later added: “I can tell you one thing: We’d like to get paid for our water in West Virginia. So I don’t think we’d be quite as expensive as oil, but we’d get a pretty penny for it.”

But that agreement, which prohibits states outside the basin from tapping the freshwater, wasn’t spurred by the variety of pipeline ideas over the years. It was sparked by a 1998 business deal in which Ontario’s government attempted to sell Lake Superior water in a deal that would have shipped water on ocean tankers to Asia.

Dempsey, the Great Lakes author and advocate, however, cautioned that the compact doesn’t totally keep the basin’s water safe.

He pointed to an exception in the agreement that allows water to be shipped out of the region as long as it’s in small containers.

“When this whole thing started, it was public outrage about drinking water being shipped out in vessels. Now you can ship it out in vessels — it just has to be in bottles,” he said.