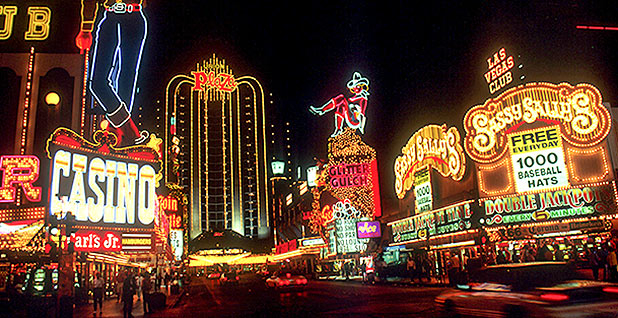 Voters in Nevada backed a measure to require more renewable energy but did not support a ballot initiative on retail electric choice. Downtown Las Vegas is pictured. Department of Transportation

Voters in Arizona trounced a proposal to require more renewable energy yesterday, while Nevadans backed a similar measure but easily defeated a plan to usher in retail electric choice.

The results capped months of campaigning that saw tens of millions of dollars pour in from utility and clean energy interests. The mixed outcome offers a window into the priorities of Western voters as they weigh different forms of energy and the role of mandates and competition.

Opponents of Arizona’s renewable ballot measure, Proposition 127, had more than double the votes of supporters, according to results on a state website. The proposal, which would have affected regulated utilities such as Arizona Public Service Co. (APS) and Tucson Electric Power, sought a renewable standard of at least 50 percent by 2030 on annual retail power sales.

It was intended to build on an existing state renewable standard of 15 percent by 2025, which the Arizona Corporation Commission adopted years ago. Contributions for and against Proposition 127 in Arizona topped $50 million combined.

The outcome was a blow to Tom Steyer and NextGen Climate Action, which was a major supporter of the proposition. Its defeat was a victory for Pinnacle West Capital Corp., the parent of APS. The measure would not have applied to the Salt River Project, a major water and power company.

Opponents of Proposition 127 portrayed yesterday’s outcome as a response to the specific approach on the ballot.

"Arizonans support clean energy, but not costly, politically driven mandates," Matthew Benson, a spokesman for Arizonans for Affordable Electricity, said in a statement. "Arizonans support solar power and renewable technology, but not at the expense of an affordable, reliable energy supply."

A statement from Clean Energy for a Healthy Arizona, which supported Proposition 127, took aim at APS, saying the company’s "stranglehold" over state government needs to be broken. In the past, the group has criticized Arizona Attorney General Mark Brnovich (R) over ballot language that included "irrespective of cost to consumers" wording.

"This campaign struck a blow for clean energy and clean politics, putting elected officials on notice that Arizonans will hold them accountable for acting as lapdogs for APS," Clean Energy for a Healthy Arizona said yesterday. Brnovich was on track to remain state attorney general, however, according to state results.

Don Brandt, CEO of APS, said in a statement that the utility is launching an effort to collect ideas and seek input from customers and stakeholders. He said APS supports a clean energy strategy that includes elements associated with solar leadership, battery storage investment, encouraging electric vehicles, partnering with customers and recognizing the importance of the Palo Verde nuclear power station.

"The campaign is over, but we want to continue the conversation with Arizonans about clean energy and identify specific opportunities for APS to build energy infrastructure that will position Arizona for the future," Brandt said.

Some attention may turn to a proposal at the Arizona Corporation Commission that has been touted by Commissioner Andy Tobin, a Republican. That plan envisions an 80 percent clean energy portfolio by 2050, and includes the Palo Verde nuclear power plant as clean energy.

A measure in Nevada that seeks no less than 50 percent renewables by 2030 fared better. That proposal, known as Question 6, will head back to the ballot in 2020 after getting majority support, a state tally showed. It’s tied to power sold to retail customers and would affect NV Energy if approved again in 2020. Nevada currently has a 25 percent by 2025 renewable standard.

The "victory reaffirms that Nevadans of all political stripes support more renewable energy, more jobs and, most importantly, the opportunity for a healthier Nevada," Katie Robbins, campaign manager for YES on 6, said in a statement.

It remains to be seen how the discussion may shape up in 2020, as the renewable proposal didn’t see the level of organized opposition apparent in Arizona this year. Nevada was a bright spot for Steyer and NextGen Climate Action, which also supported this effort.

The expensive fight over Question 3 in Nevada ended in a rout after contributions approached $100 million. The measure sought to direct lawmakers to establish an open, competitive retail electric market by July 1, 2023. Among its provisions was a prohibition on granting monopolies and exclusive franchises for power generation.

The plan received about 72 percent backing in 2016, but it couldn’t retain that level to obtain a necessary second show of support. State results showed opponents more than doubling the number of supporters in 2018, though the final margin could change.

The defeat of Question 3 was a loss for proponents such as Las Vegas Sands Corp., a resort and gaming company of which Sheldon Adelson is CEO, and Switch Inc., a data center company. The outcome was a victory for NV Energy, which is part of Warren Buffett’s Berkshire Hathaway Energy portfolio.

Some big users already have broken away from NV Energy’s electric service, but NV Energy could have become a wires company in Nevada without traditional retail and generation arms if Question 3 passed.

Supporters of the measure touted the potential for lower rates and new options for consumers, while opponents worried that Question 3 would lead to higher power rates and knock renewable investments off track.

"Thank you to all Nevada voters who took the time to carefully study the facts on this complicated issue and defeat this risky and costly constitutional amendment," the Coalition to Defeat Question 3 said in a statement.

In Arizona, Republicans Justin Olson and Rodney Glassman were leading a close race for two spots on the Arizona Corporation Commission. Olson was appointed to the commission, which regulates utilities, in 2017. Republican Tom Forese, the current chairman, lost in a primary this year.

The five-member New Mexico Public Regulation Commission, meanwhile, is poised to see some new additions. The outcome has implications for PNM Resources Inc. and could affect future decisions on rates and power generation.

Leading candidates included Republican Jefferson Byrd in District 2 and Democrat Steve Fischmann in District 5, according to results on a state website. Democrat Theresa Becenti-Aguilar, who previously was on the commission, will fill a seat in District 4 after being unopposed in the general election. The two remaining members of the commission previously won their seats as Democrats.

In Oklahoma, Republican Bob Anthony retained his seat on the Oklahoma Corporation Commission with about 60 percent of the vote, according to a state tally. Anthony was first elected to the commission in 1988.