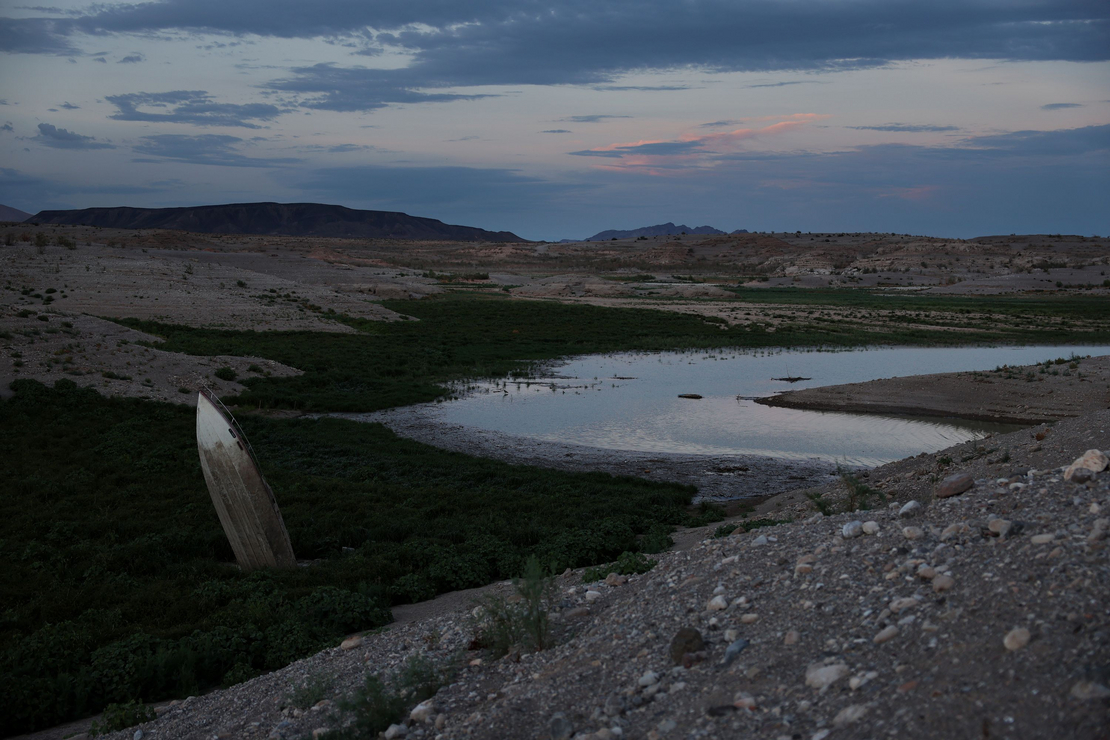 A formerly sunken boat stands upright Aug. 18 in a section of Lake Mead in Nevada that was previously underwater. The reservoir on the Colorado River is experiencing dramatically falling water levels after decades of drought. Justin Sullivan/Getty Images

LAS VEGAS — As leaders from seven Western states negotiate new reductions from the Colorado River — in an effort to derail looming catastrophes at Lake Powell and Lake Mead — Arizona’s top water official is arguing his state should no longer be first to go dry.

In remarks at the annual Colorado River Water Users Association conference last week, Tom Buschatzke, director of the Arizona Department of Water Resources, seized on a 1968 law to argue that despite common perception, provisions that would force Arizona to give up its share of Colorado River water before other states have yet to be triggered.

“One thing I want people to know: If you go back and read the act, the ‘68 act about the priority, it basically says: ‘’When there is not 7.5 million acre-feet available to the Secretary [of Interior] for delivery to the three Lower Basin states, that’s when Arizona’s junior priority kicks in,'” Buschatzke said.

He added: “Even though the system is not healthy, there’s way more than 7.5 million acre-feet in the system right now. So I would question whether or not the priority system really has kicked in.”

An Interior Department spokesperson declined to answer questions about whether Secretary Deb Haaland agrees with Buschatzke’s interpretation of the law.

That difference in interpretation could determine whether Arizona must give up even more of its 2.8-million-acre-foot Colorado River allocation. Potentially, that point of view could also prove to be a complication if Arizona officials stick to it as they try to work with other states’ leaders on an agreement about what should happen now, with a shrunken river forcing cutbacks across the West.

Under a multistate agreement inked in 2019 to address falling levels in Lake Powell and Lake Mead — where federal officials are struggling to maintain hydropower operations — Arizona is already on track to forfeit more than 1 million acre-feet of water over a two-year period.

An acre-foot of water equates to about 326,000 gallons of water, or about enough water to fill a football field to a depth of 1 foot. One million-acre feet of water could fill 1 million football fields to that same depth.

“Arizona agreed to take the bulk of the shortages under the [Drought Contingency Plan] and under the guidelines because it doesn’t want to get into a litigation fight,” Buschatzke explained.

But faced with ongoing negotiations for the seven Colorado River Basin states to cut as much as 4 million acre-feet of water next year, Buschatzke wants his fellow water managers to reconsider how his state is viewed.

Buschatzke has argued publicly that the “priority system” — or the process for determining which water users have access to water in years when the river is low — is the biggest hurdle in reaching a new consensus among states by a Feb. 1 deadline. Interior Department officials have warned state leaders that they will make the decisions about cuts if the states can’t reach a compromise (Greenwire, Dec. 19).

In the West, water from the Colorado River and other basins is allocated based on what are known as “water rights,” which vary by state but typically guarantee users an annual amount of water based on the age of their claim.

Older — or senior — claims receive priority for water in years when river flows are lower, while newer, or more junior, claims may be required to forgo some or all of their water.

But in an added twist, Arizona’s largest water delivery agency, the Central Arizona Project, or CAP, is considered “junior” thanks to a 1968 law that authorized its construction as the last major diversion on the Colorado River.

More than half of Arizona’s Colorado River is funneled through CAP, a canal designed to carry 1.5 million acre-feet of water to Maricopa, Pinal and Pima counties, which together include about 5 million people.

Former Bureau of Reclamation Commissioner Brenda Burman, who served in the Trump administration, credited that status to California lawmakers irked by the Supreme Court’s ruling in Arizona v. California several years prior.

That 1964 decision declared Arizona had a right to 2.8 million acre-feet of water from the Colorado River, refuting arguments by California that it had a right to those same waters.

“They exact[ed] a price, and that price is what we call the ‘junior priority,'” said Burman, who will become general manager of the Central Arizona Project in January.

In an interview with E&E News, Robert Glennon, a professor emeritus at the University of Arizona’s James E. Rogers College of Law, said Buschatzke’s interpretation of the 1968 law is likely accurate, but added that it may not matter.

“I think Tom is probably right, technically, but I don’t know what good it does, considering there’s not enough water in the river,” said Glennon, who is the author of the book “Unquenchable: America’s Water Crisis and What To Do About It.”

Glennon pointed to the Colorado River Compact of 1922, which divides the waterway between the Upper Basin states of Colorado, New Mexico, Utah and Wyoming and the Lower Basin states of Arizona, California and Nevada.

“No one thinks there’s that much water in the river now,” Glennon said.

In fact, the four Upper Basin states, which rely on precipitation and snowmelt for their water supplies, received just 3.5 million acre-feet in 2022, according to the Upper Colorado River Commission. Some estimates put the river’s flows as low as 11 million acre-feet annually.

Still, Glennon asserted that current Colorado River negotiations are likely to result in proportional cuts applied across the Lower Basin states, rather than requiring Arizona to sacrifice its share of the river.

“I don’t think California is going to try to hold [Buschatzke’s] feet to the fire and say Arizona is first. That ship has sailed,” Glennon asserted.

He later added: “This is not an academic game of, ‘Can I make a more clever argument that would appeal to a law professor?’ This is the real world, and what Mother Nature is doling out means that everyone is going to have to take a big haircut. And quibbling about what ratio is not going to get the deal done.”

Jennifer Gimbel, a former Interior official now at Colorado State University’s Colorado Water Center, likewise suggested that the “Law of the River” — as the set of laws and agreements governing the Colorado River is known — is not as rigid as it might typically be while states struggle to avoid a federal intervention.

“The law right now is really more a framework than it is strictly black and white,” said Gimbel, who served as Interior’s principal deputy assistant secretary for water and science in the second Obama administration.

“All of the states are trying to make sure that they’re protecting their interests under the law yet being flexible enough to do whatever needs to be done to help the river,” she said.

“The project that was designed in the ’60s was an agricultural project that would move water and replace the groundwater depletions. Now it’s basically going to Indian tribes and cities,” Kuhn said. “A situation where the Central Arizona Project can’t divert water is just not workable.”

He added: “We need to ignore the junior priority and what happened in the past, and figure out a way that the Central Arizona Project can continue to deliver critical water supplies to tribes and cities.”