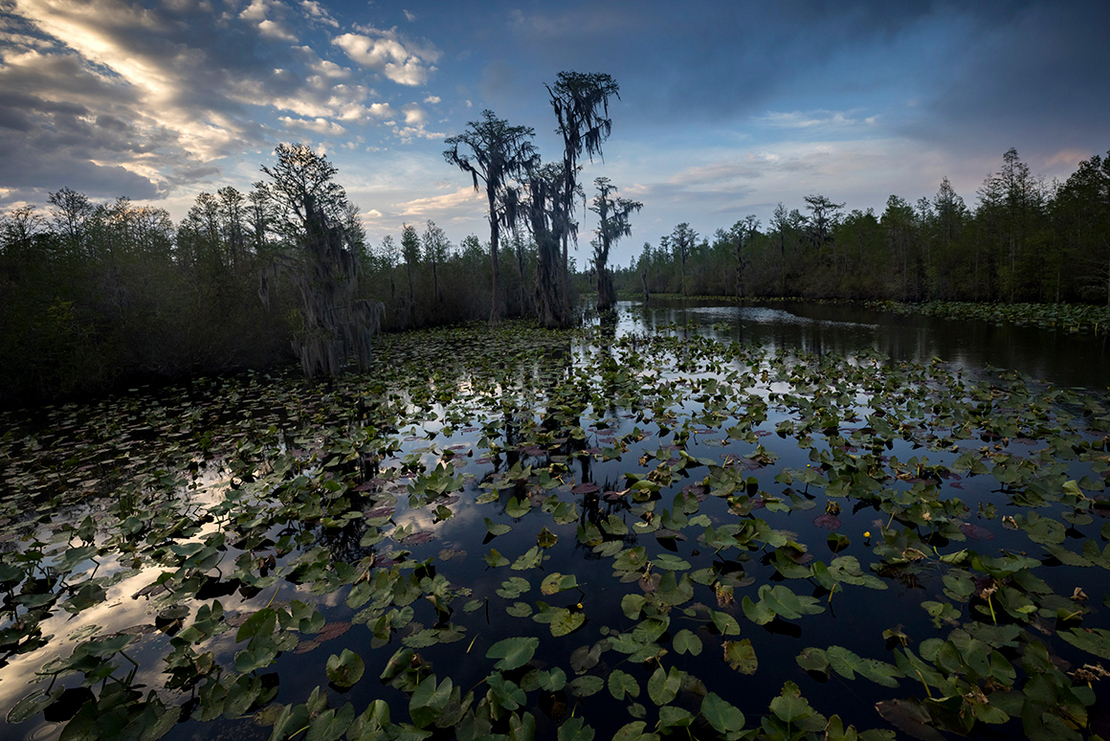 The Army Corps of Engineers has dealt a massive blow to a titanium mining project in Georgia close to the nation’s largest blackwater swamp.

Assistant Secretary of the Army Michael Connor in a memo on Friday reversed decisions made under a now-defunct, Trump-era Clean Water Act rule that excluded 556 acres of wetlands from federal protection and paved the way for the proposed mine near Okefenokee National Wildlife Refuge in Georgia to move forward.

Those wetlands would intersect with a titanium mine proposed by Twin Pines Minerals LLC, an Alabama-based company. Twin Pines wants to extract titanium in the swamp for a wide array of markets, from consumer paint pigments to military equipment and medical technologies. Titanium is a mineral critical to national security, according to the U.S. Geological Survey.

But environmentalists and Indigenous activists have argued mining titanium near the Okefenokee refuge could have serious environmental drawbacks, saying the project would irreparably harm swampland crucial to the wildlife refuge’s freshwater ecosystem.

The mine also became a nexus for conflict over the future of federal regulation governing the “waters of the U.S.,” or WOTUS.

After President Joe Biden nixed the Trump WOTUS rule last year, legal experts said that Twin Pines’ project would potentially be vulnerable to lawsuits or federal enforcement without a new dredge-or-fill permit based on a more protective pre-2015 definition of WOTUS that the Biden administration has reverted to (E&E News PM, Nov. 18, 2021).

Sen. Jon Ossoff (D-Ga.) joined in the efforts to stop the mine shortly after coming to the Senate in 2021. Earlier this year, Ossoff asked the Army Corps to restore the water protections at the project site that were removed under Trump (Greenwire, Feb. 8).

Ossoff this morning took partial credit for the Army Corps’ actions, saying he “always knew and loved the Okefenokee” as a child growing up in Georgia, and declaring he “succeeded” at making sure “the protections of the wildlife refuge, wilderness and surrounding wetlands are restored.”

Christian Hunt, southeastern representative for conservation group Defenders of Wildlife, said the Army Corps’ action does not kill the mine, as Twin Pines can proceed through a federal permitting process if it so chooses.

Yet Hunt saw the agency’s decision on the mine as a step in the right direction when it comes to water quality protection and tribal engagement under the Biden administration.

“This was very low-hanging fruit,” Hunt said. “The Okefenokee is really one of the world’s last freshwater ecosystems that hasn’t been damaged yet.”

A representative for Twin Pines Minerals did not respond to requests for comment. In a statement to the Associated Press, Twin Pines President Steve Ingle said the company still intends to “move forward” with its mine “and fulfill all requirements.”

RaeLynn Butler, manager of the Muscogee Creek Nation’s Department of Historic and Cultural Preservation, said local corps officials had initially told the tribe they would be consulted as the Twin Pines mining project moved forward. Those plans were derailed when the definition of WOTUS shifted under the Trump administration and federal protections — along with the need to consult tribes — were pulled, she said.

Butler applauded Ossoff for drawing attention to the tribe’s request for consultation, and said the Muscogee are pushing the corps to conduct a deeper environmental review of the proposed mine. The tribe is also working with the Fish and Wildlife Service to designate the swamp as a traditional cultural property under the National Historic Preservation Act.

“We’re really glad to see this decision reversed and in line with respecting tribal sovereignty and understanding how critical it is to have tribal input on these types of decisions that impact not just natural and cultural resources, but our significant water resources for everybody in the region,” said Butler.

In the memo, Connor concluded the corps erred when issuing the so-called jurisdictional determinations because the agency declined to consult with the Muscogee Creek Nation despite the tribe’s request.

These kind of corps determinations, good for five years, pave the way for mining companies, developers and property owners to obtain permits to fill or dredge streams, tributaries, lakes and wetlands, ditches, swales, and stormwater ponds. Wetlands and streams that are not given federal protections can be damaged and destroyed forever, along with their abilities to sequester carbon and protect downstream water quality.

The Muscogee tribe had asked to consult with the Army Corps’ Savannah District in a Jan. 4, 2021, memo, Connor said, but the agency at the time was following a policy that precluded tribal consultations on draft determinations.

Last April, the corps scrapped that controversial policy and vowed to discuss the fate of wetlands and waterways with tribes at the Rosemont mine in Arizona and around the country (Greenwire, April 21, 2021).

Connor likewise said the corps failed to consult the Tohono O’odham Nation, Pascua Yaqui Tribe and Hopi Tribe when granting developers of the controversial Rosemont copper mine a similar determination last year that excluded all ephemeral waters present on the site using the Trump-era WOTUS definition.

“Given the specific circumstances associated with these [jurisdictional determinations], it is my policy decision that the Corps should have honored these government-to-government consultation requests,” he wrote.

Unlike the Twin Pines decision, it’s unclear how consequential the Army Corps’ action will be for the Rosemont mine, as Hudbay Minerals Inc. voluntarily gave back a previous water permit issued under the Trump rule.

The corps’ decision on Friday aligns with a memo the agency unveiled in January, stating the agency would no longer rely on decisions made under the Trump rule about which waters are federally protected when making new permit determinations (Greenwire, Jan. 14).

Some say the more protective, pre-2015 WOTUS definition that the Biden administration has imposed since last year may not allow the mines to move forward even if developers do apply for new corps determinations. Then again, a fight over WOTUS is also playing out in the Supreme Court, where industry and red states are pushing the nation’s highest bench to narrow the scope of the Clean Water Act (Greenwire, April 15).

“Moving forward under the more protective pre-2015 standard for both of these projects is going to be an uphill climb,” said Lowry Crook, a former corps official under the Obama administration.

Crook said he’s not aware of other projects that would see similar reversals. Connor in the memo on Friday clarified that the document only applied to the Rosemont and Twin Pines projects.

“These circumstances are unique to the Rosemont and Twin Pines parcels [approved jurisdictional determinations],” Connor wrote. “Accordingly, the direction in this memorandum is limited to these [determinations] and is not intended to establish or rescind any separate, nationwide policy guidance.”

The corps’ decision is the latest move by the Biden administration to ensure tribal concerns are front and center at the Army Corps and beyond.

On Friday, the corps quietly published in the Federal Register a new effort to “modernize and advance” the Civil Works program to better meet the needs of tribal nations and other disadvantaged and underserved communities.

One area the corps plans to address when updating its tribal consultation requirements: WOTUS decisions.

“Some Tribes have questioned previous issuances of approved jurisdictional determinations, which are final agency actions under the Administrative Procedure Act, without pre-decisional government-to-government consultation,” the agency wrote.

Tribes, on one hand, can be directly impacted by jurisdictional decisions, the corps wrote. They may also have Indigenous Traditional Ecological Knowledge (ITEK), which may assist in making such decisions but is unknown to the corps and may only be provided in consultation with tribes.

“The Biden-Harris Administration recently issued a memorandum providing that ITEK can and should inform Federal Government decision making where appropriate,” the agency wrote. “The Army solicits input on conducting Tribal consultations on approved jurisdictional determinations as a policy matter.”

The effort builds on an executive order President Joe Biden signed that year that recognized tribal sovereignty and self-governance and directed federal agencies to establish “regular, meaningful and robust consultation” with tribes.

For the first time ever, tribal members are overseeing and updating the corps’ environmental justice plan. Connor, a policy expert, former Capitol Hill staffer and Interior official, is a member of the Taos Pueblo and the first tribal member to be tapped to oversee the corps.

The increased focus on tribal consultation has also led to direct policy changes. Last year, for example, the Biden administration ditched an earlier corps policy that barred early consultation with Native American tribes over the fate of wetlands and streams under the Clean Water Act (Greenwire, April 21, 2021).

And the push goes beyond the corps. Last week, EPA announced a new proposed rule that would give states, tribes and territories more latitude when deciding the timelines and substance of reviews of applications for Clean Water Act permits to build mines, pipelines and other projects (Greenwire, June 2).

Clarification: This story was updated to clarify a quote by former Army Corps official Lowry Crook.