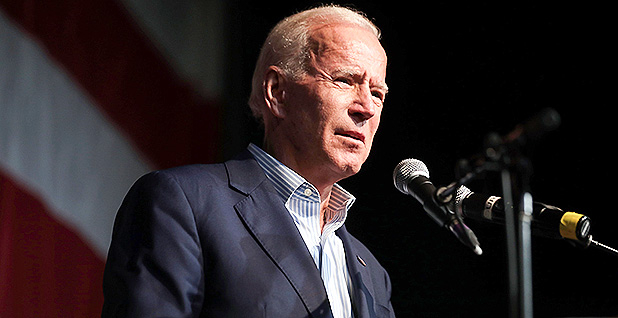 A plan by presumptive Democratic presidential nominee Joe Biden to create a new federal agency for low-carbon energy technologies is fueling debate about the role of the federal government and the Department of Energy in funding climate projects.

The former vice president’s proposal, dubbed "ARPA-C," would focus on "game-changing technologies" in support of a 100% clean energy target by 2050, according to the candidate’s website.

It mentions eight technologies, such as small modular reactors and advanced energy storage, as a "specific focus" — nearly all of which are already the subject of projects at DOE’s Advanced Research Projects Agency-Energy (ARPA-E).

"[I]t is not clear to me why a new agency (ARPA-C) is needed, rather than increasing funding to ARPA-E, which is already well established and has a proven track record of success and impact," said Jesse Jenkins, an energy systems engineer and associate professor at Princeton University, in an email to E&E News.

Founded in 2007, ARPA-E supports long-shot attempts at breakthrough technologies for clean energy. Modeled after a similar program at the Pentagon, ARPA-E resulted from a compromise: Then-President George W. Bush signed the legislative package that created it, but criticized it as a "counterproductive" incursion into an area better handled by the private sector.

"We’ve kind of gotten now in a place in Congress where there’s broad bipartisan support for ARPA-E. That’s a known, working program," added Rich Powell, executive director at ClearPath Action, a conservative energy innovation advocacy group. "I’m a little skeptical of the idea that the thing we need to solve climate change is just start another program."

But other analysts, including the founding director of ARPA-E, welcomed the idea.

Arun Majumdar, who is cited by Biden’s website in its eight tech priorities, pointed out that his former agency usually kept its focus on "mitigation," or ways to limit global warming rather than simply reacting to it.

"As we look toward the future, we find that there will be a need for adaptation and resilience," Majumdar said. Grid infrastructure would need to handle increasing power loads during warmer summers, crops would have to become more drought-resistant, and cities would need to learn how to manage sea-level rise. "That is not what ARPA-E does," he said.

A new climate agency for those problems would be a good start. "I really like the idea of an ARPA-C," said Majumdar, "and we should be thinking even bigger than that."

It’s unclear how the ARPA-C concept took hold within the Biden campaign, which did not respond to inquiries from E&E News. Majumdar said he had no hand in developing it but didn’t object when the campaign asked to cite his recommendations from a 2019 congressional testimony.

But rough drafts of the concept have circulated for years.

As early as 2014, for example, a student at the University of California, Berkeley’s business school named Noah Deich mused in a blog post about starting an agency dedicated to carbon dioxide-removal technologies.

Now executive director at Carbon180, a Washington-based nonprofit that promotes carbon removal strategies, Deich said his group had floated that same idea to Biden advisers — except, he added, that the "C" in Deich’s ARPA-C stood for "carbon," not "climate."

"That doesn’t feel like an ARPA-C in the way we’ve envisioned it," said Deich after reviewing the campaign’s climate page. "It just seems like an expanded ARPA-E."

A year after Deich’s blog post appeared, the David and Lucile Packard Foundation gave $115,000 to one San Francisco-based environmental consultancy to look into how philanthropies could launch their own versions of an ARPA-C program for climate innovation.

That research grew into the Climate Breakthrough Project, which funds emissions reduction strategists in other countries.

A similar concept for a new agency entwining climate innovation and the nation’s agriculture also surfaced briefly in Congress last year. A Democratic-sponsored bill called for an agency at the Department of Agriculture focused on improving crop sustainability and resilience to extreme weather — but failed to advance.

The plan to create an ARPA-C would face opposition from many conservatives. Free-market groups like the Heritage Foundation have said ARPA-E should be eliminated, and President Trump has proposed to end funding for it in each of his yearly budget requests. Congress has ignored those requests and increased funding for the agency.

It’s also uncertain, however, if such a plan could gain traction if Biden were elected. ARPA-E received initial seed funding of $400 million from the 2009 American Recovery and Reinvestment Act during a different set of economic circumstances and when Democrats controlled both Congress and the White House. It currently is funded at more than $400 million, with support from Republicans like Sen. Lisa Murkowski (R-Alaska).

ARPA-E’s work, meanwhile, remains obscure to much of the public. Unlike the Pentagon’s Defense Advanced Research Projects Agency, which pioneered early versions of stealth fighters and the internet, or the Energy Department’s loan program, which helped launch Tesla Inc., the agency lacks a high-profile success story.

"There’s not a transformational story there yet," said David Hart, a senior fellow at the Information Technology and Innovation Foundation.

But he noted that one ARPA-E grantee looks like a prospective superstar. A Massachusetts-based startup, Form Energy Inc., announced this month it would begin piloting a battery that can store and discharge renewable power for a week straight. Supporters of ARPA-E note also that the agency has sparked startup companies and millions of dollars in follow-up investment money.

Hart didn’t object to the idea of an ARPA-C, but balked at the campaign’s description of it as a "cross-agency" program. "I don’t think lumping everything into one superagency makes sense."

Instead, he said, a White House council should oversee climate change work at all of the major executive agencies. "It’s a monster problem," he said.

Other climate thinkers shrugged off the question of whether a new agency made good institutional sense.

"Rather than the organizational chart, the more important piece of this is, what are the areas of focus? What’s the level of effort?" said Costa Samaras, director of Carnegie Mellon University’s Center for Engineering and Resilience for Climate Adaptation.

The candidate has pledged to invest $400 billion in clean energy over the next decade, he noted. "That’s a good starting point for the kind of effort we’re going to need," Samaras said.

"Could it be housed in ARPA-E? It could. … But we need to start acting, through our budget, like we’re serious about climate change," he said.