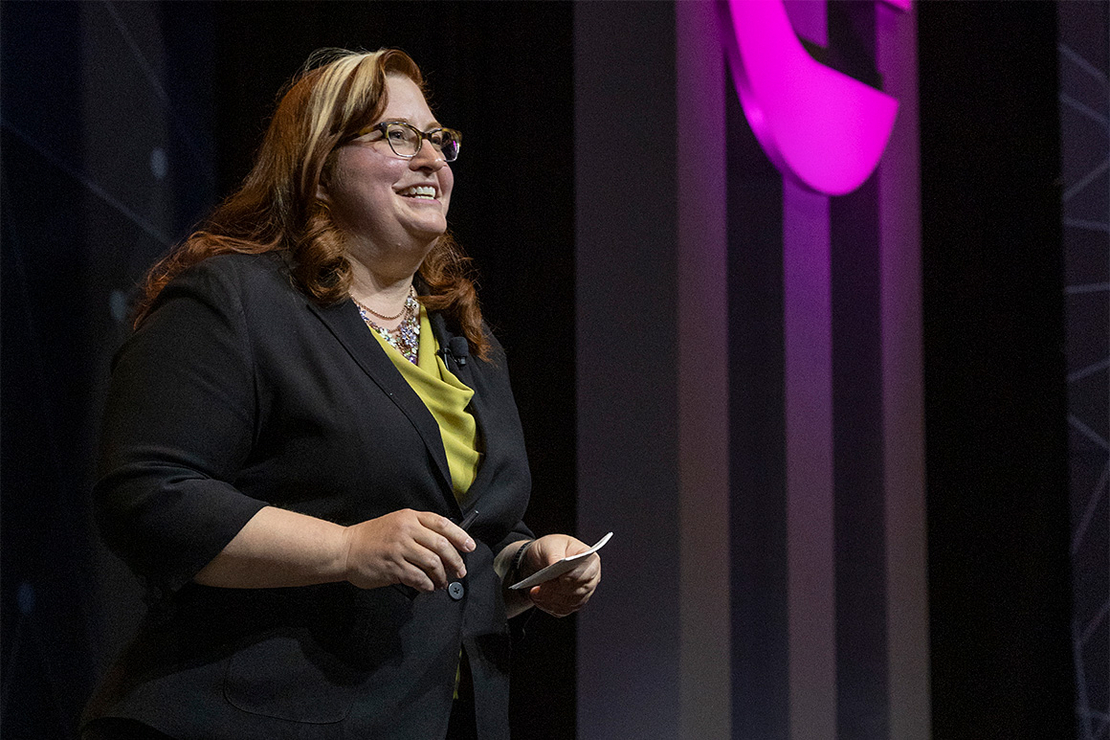 Jennifer Gerbi, acting director of the Advanced Research Projects Agency-Energy, addresses the agency's conference in Aurora, Colo., in May. ARPA-E

When Jennifer Gerbi opens her email, she wants to be surprised.

As the acting director of the Department of Energy’s Advanced Research Projects Agency-Energy (ARPA-E), Gerbi is in charge of the country’s most ambitious clean energy research. In its decade and a half, ARPA-E has lent federal support to everything from electric vehicle batteries to fusion energy.

As for what’s next, Gerbi said, “The best answer is we don’t know yet.”

“I want to be surprised with what the program directors bring in,” Gerbi told E&E News. “Then when we put out a funding announcement, when we get applications in, it’s the best when you are surprised by those applications.”

Gerbi, who previously worked at Dow Chemical Co. and Dow Corning Corp., joined ARPA-E in 2015 as a program director and was named deputy director for technology in 2020. She has led the agency in an acting capacity under President Joe Biden. In March, Biden appointed Evelyn Wang, head of the mechanical engineering department at the Massachusetts Institute of Technology, to head ARPA-E. Wang’s nomination has not received a vote in the Senate Energy and Natural Resources Committee.

Gerbi’s tenure comes as the Biden administration has created new pathways to bring clean energy technology to the marketplace. Supported by billions in last year’s bipartisan infrastructure law, DOE has renewed its focus on commercializing technology, including a new office focused on clean energy demonstration projects.

Gerbi said the restructuring at DOE — which will include a significant staff increase — is good news for her agency’s partners. Even if ARPA-E didn’t get a funding boost in the infrastructure law, Gerbi said the work at DOE has been “incredibly motivating” and created “optimism about seeing these things deployed at scale in the future much more quickly.”

“It really helps us push as fast as possible because we see all of that support on the demonstration side and the deployment side,” Gerbi said. “We all find it very exciting.”

Gerbi sat down with E&E News on the sidelines of the ARPA-E conference outside Denver to discuss hiring needs, how ARPA-E fits in with DOE’s new plans and teaching aerodynamics through Formula 1.

What do you see as the role of ARPA-E in the Biden administration’s climate agenda?

To me, it’s bringing new ideas in to meet the goals of that mission. There are a number of things that people are working on that are a little bit more established. We know that we need better batteries for electric cars and batteries for [the] grid. There’s a lot of things the administration is focusing on in the deployment sector of technologies that are ready to go or close to ready to go, like offshore wind.

Our role is to try to find the new things that can move forward to deployment. We think it’s very important to be looking in areas that I call off-road map. They’re too new to show up anywhere.

What sorts of ideas are most exciting to you?

That’s always such a hard question to answer because we’re not supposed to have favorites!

I love it when we find a gap that needs to be filled that’s not obvious. We have a program that’s new looking at carbon-negative buildings, not just carbon neutral. That’s something I think is exciting. The work that we’ve been doing in nuclear fuel cycles, and that includes existing waste, I think that’s incredibly exciting as well. We have the freedom to look into that. It’s a hard thing to look into. It’s a hard technology to work on.

That is the kind of thing that we have the freedom to work on that’s actually very difficult for other people. But to me, that fits quite well within our goals for the future, in terms of meeting firm baseload energy as well as looking at our built environment and everything else.

Under the infrastructure law, DOE established the Office of Clean Energy Demonstrations (OCED), focused on proving the effectiveness of new technology at scale. How can ARPA-E work alongside that office?

Whether you want to call it the technical readiness level or market readiness level, the OCED is much further down the path than ARPA-E. We want to communicate and coordinate so they understand what we’re working on and what they might be seeing in the future coming from us.

It’s a good question in terms of how does this spectrum look. What is ARPA-E and ARPA-E’s scale-up and the applied offices and [the Office of Energy Efficiency and Renewable Energy] and the demonstrations office and the loan program office? We’ve been working very closely with them to understand how we can best help them and how that works and what makes sense in terms of the transition into that office.

I will be thrilled if technologies from ARPA-E end up in OCED.

But it’s not guaranteed that technologies will follow that path?

Not necessarily, and they’re a bit limited in what they can do as well. It depends on what the topic is of the technology that comes out of ARPA-E.

Democrats in Congress are working on a climate and tax bill. What would you like to see that could support ARPA-E’s mission?

I would say there is so much that we can do that we’re not doing right now. It’s important for us to get more people into the agency. And we are prepared to take on whatever scope Congress would like to give us. We are ready to run with whatever they choose to throw at us.

You said the infrastructure bill changed the atmosphere for research. What could another climate bill do?

There is a lot that could be done by somebody on the climate side that is difficult to do now. You’ve heard about some of these technologies where climate is mentioned versus energy, for example methane coming from permafrost. There are things that are impacting climate change that do not come from energy, and I would love to see those addressed somewhere. It’s not up to me where that happens.

What has the difference been in working under the Trump administration and this one?

We have appreciated and enjoyed the support we have had from the secretary’s office. I’ve only been acting director in this administration, I didn’t see the same things in the previous administration. I can say we have had a significant amount of support that we greatly appreciate. It has helped us with outreach, it has helped us with recruiting. We are all about people we bring into the agency, and because of our term limits, we are always hiring.

What are your biggest priorities for ARPA-E?

The first one is hiring. I want more program directors and more tech-to-market advisers. We are seriously ready for that.

I am passionate about workforce development and scientists and engineers of the future. We have so many amazing smart kids in high schools, including right in the D.C. area. They don’t have any room to move forward. They’re smart as heck, and they can’t even afford to go to community college.

I’ll be in high-level meetings where we’re talking about: How are we going to staff workforce for fusion and this and that? In the White House, we’ll have these meetings. I’ll say, “Do you know how many kids are in high schools 2 miles from here that can’t even afford to go to college?” I have a real passion in that space, and to me, achieving all the innovation we want, achieving the administration’s goals, mean that we need new generations of scientists and engineers. They are all sitting in high schools ready to go, and they don’t necessarily have a way out. I know that’s not my job, and I’m not trying to get into politics with it, but there’s so much talent wasted. It makes me crazy, and it’s just a huge opportunity for us to bring those kids in. I know DOE has some programs and other folks do as well, we just need to redouble our efforts.

Are there any technology areas you want to explore?

I always want to see completely new things coming into the agency. I will say there is interest in reactive carbon capture. I have always had an interest in the computation algorithm side of things. We use a huge amount of energy. Whether it’s Internet of Things or data centers, we don’t necessarily have energy-efficient code. As we use more sensors, more control, you can imagine a situation where an autonomous car uses more energy in the sensors and communication and data processing than the car. I want somebody in that space.

What do you do in your free time?

I have a 16-year-old daughter, and we are both bonkers about Formula 1. We will just completely nerd out and watch not just the races and the qualifiers, but even the practices. I will teach my kid about aerodynamics. I purchased a very old ‘94 Miata that was pretty busted up for the purposes of teaching her how to fix a car. Not that I have a garage or anything like that, so progress has been slow.

Your job is all about emerging technology, but what’s the most old-school thing you refuse to upgrade?

Engineering paper and good pens and pencils. You can take them out of my cold dead hands.

This interview has been condensed for length and clarity.